Kevin Nash’s “Big Sexy World Tour” search for his first-ever female valet kicked off this week in California, and he stressed that the contest is not restricted to 20-something girls in bikinis.

“I’m 50-years-old. I don’t have a lot in common with a 20-year-old girl,” Nash told SLAM! Wrestling from San Francisco. “To me, I’ve met so many girls in my life that physically are a ’10,’ but then you talk to them for two minutes and they’re a dud, and they go from a ’10’ to a ‘5.’ I think that the sexiest thing with most women is attitude.” 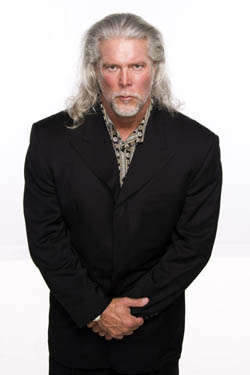 Kevin Nash wants you to be his valet! Photos courtesy TNA

Hence why interested applicants must e-mail not only a photo of themselves, but also an explanation (in 50 words or less) about why they are deserving of the chance. The winner will receive an all-expenses-paid trip to TNA’s December 20 Final Resolution pay-per-view in Orlando, Florida, and accompany Nash to the ring for his match that night.

The 20-year veteran and multi-time Heavyweight and Tag Team Champion said that depending on her abilities, the winner could end up staying on with the company.

“It’s guaranteed one-shot, but if we find a diamond in the rough out there, somebody that TNA feels is a money personality and is going to enhance the show, then I’m sure that they’d be willing to take it a step further.”

The valet search will be incorporated into the storyline of the next set of TV tapings, and depending on how that goes, he may not need to be on the road as much, giving media interviews to get the word out.

Nash said he has been having a blast at TNA, with its proximity to his home and family perhaps its greatest advantage.

“I love it. It’s in my backyard — from my driveway to the back gates of Universal Studios is 71 miles. So I don’t have to get on a plane to go to work, I can drive to work, which in this industry is unheard of,” he said. “And we’ve got a great crew of guys and girls, management’s cool, (TNA President) Dixie (Carter)’s real great to work with. To me, at this point in my life, I just need kind of a chill place to work, and when it’s time to go to work and turn up the intensity and be intense, at the end of the night it’s nice to be able to relax and spend some time with friends. I’ve got a lot of people that I’ve spent a lot of years with in this industry that are on the crew. Even the guys in the truck, a lot of people (there) have worked with me in the WWE and WCW.”

Nash did not believe the environments of the three major companies he has worked for differed all that much.

“I think pro wrestling’s pro wrestling,” he said. “Vince (McMahon)’s production is almost second-to-none, the amount of trucks and edit suites that they actually bring right there. But I have to say that I’m proud that when I first got (here) we had one truck and now we’ve got two trucks, we’re shooting HD now, the company’s progressing at a rapid rate, viewerships are up. It’s nice to be a part of a growing company.”

Nash actually almost ended up switching back to WWE after he talked to McMahon last October, but pressure from his better half convinced him to stay close to home.

But upon his return, his wife of 22 years told him she and their son (an earnest musician with no ambition of following in his father’s footsteps into basketball or pro wrestling), deserved a vote too.

“When it came down to it, my wife just really didn’t want me back on the road that much. She likes the fact that even though I’m at work, I’m really only an hour-and-a-half away if she needs me… I’ve got a 13-year-old boy, and I’ve spent a lot of my life and a lot of his life on the road. We’ve got five years until he goes to college, and I really want to spend those five years as close as I can, and spend as much time as possible with him until that time.”

As long as his body holds up, Nash said he would like to continue wrestling. He has made efforts to see to it that he remains healthy, and with more cardio workouts and a “miserable diet,” he has dropped 35 pounds in the last two years and is wrestling at 282 pounds, the same weight at which he played basketball in his junior year at the University of Tennessee.

This Sunday, the fit and trim Nash will wrestle Mick Foley for the Legends title.

“We’ve had one other match early, early in our careers, I believe maybe in ’91 on an overseas tour for WCW, so this is actually the second time we’ve ever had a match… I’m looking forward to it.” 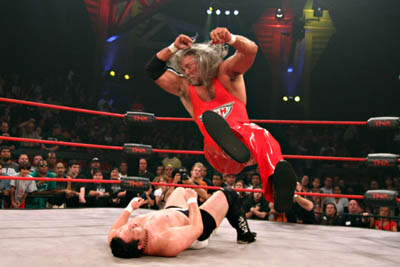 Whether Jeff Jarrett makes his return at Hard Justice is another issue, and not one that Nash is really keen on speculating about. Jarrett has been absent from TNA programming since Carter told him not to attend last month’s PPV. Personal issues between he and Kurt Angle came to light last month on Bubba the Love Sponge’s radio show on Sirius-XM Radio when an unknown TNA employee called the show.

“I just try to stay out of anything that’s going on… in the past, I was known to play office politics backstage and be the locker room lawyer. But at 50 years old, I’ve decided at this point in my life, I’m going to worry about my segments, what I have to do, and if it doesn’t affect me or my paycheque, it’s really none of my business what goes on.”

Nash said his reputation as a manipulator has been exaggerated, and got pinned on him because he was not shy about saying what he felt.

“I’m a big guy. If you ask me my opinion, I state it. I tend to tell exactly how I feel, I don’t sugar-coat things, and there’s not a lot of people that do that… So few people are men in this world — everybody’s backstabbing and talking behind backs. If I say something behind your back, I’ll turn around and say it right to your face. I don’t have a problem with it. And a lot of people aren’t like that. If that offends people, that’s too bad.”