Sometimes he’s Incognito. Sometimes he’s Mystico de Juarez. (But never Mistico — that’s a different guy.) If you are confused, try being the volador under the mask, traveling the world, putting on clinics in the high-flying lucha libre style.

“I say I’m Mysticognito — I put them together!” laughed the luchador from El Paso, Texas, during a recent stop in Toronto at a BSE Pro show at Harbourfront Centre, a part of the Mexico: Beyond Your Expectations festival. 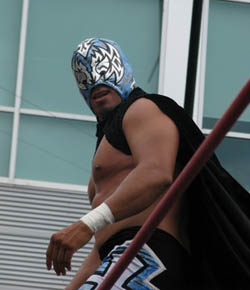 Given that he has about 20 different masks to choose from each night, “Mysticognito” can be whomever he wants that night. However, his biggest opportunities in North America — CHIKARA, TNA, Ring of Honor — have come under the name Incognito, so that’s the name to stick with for our purposes.

The 31-year-old Incognito has been wrestling professionally since he was 14.

“Growing up in El Paso, I used to go to Juarez, which is across [the border] and watch Eddie Guerrero wrestle, Konnan, when they first started. It was a great experience to see all those guys wrestle,” he told SLAM! Wrestling. “My interest started when I was a little kid, five, six years old, because my grandfather used to take me to all the luchas. We used to take pictures with all the wrestlers.”

He never dared imagine himself in the ring.

“I never actually thought I would be a wrestler. It was my dream, but when you dream, you never think it will come true. For me, it’s been great. I started training hard in El Paso. I was state champion in the United States, and then went to nationals in Pittsburgh. From there, I went to college for a few years. I started training in the actual lucha libre in Juarez for two years.”

Trained by a Juarez-based luchador who worked as El Pirata, Incognito has continued to learn from whomever he has associated himself with or been in the ring with, including names like El Hijo del Santo and Blue Demon Jr.

“I tried to always have my eyes and ears open,” he admitted.

Though well established in Mexico’s AAA promotion, the 5-foot-10, 215-pound grappler’s upbringing and travel has helped him switch styles as necessary.

“I think my advantage is I’m from the border, I’m from El Paso, and Juarez in Mexico. I’ve been used to wrestling with a lot of Mexican-style wrestlers and also with American-style wrestlers,” he said. “It’s good for me, because I can adapt to any style.”

In North America, Incognito’s biggest wins have been in Chikara. Teaming with El Pantera and Lince Dorado, he won the 2008 King of Trios tournament, then followed that up by claiming the 2008 Rey de Voladores tournament. 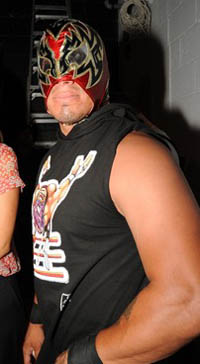 He speaks highly of his time in CHIKARA. “They gave me the opportunity to get known up here, up north. I’m grateful for that. I competed in the Trios with them, and also the high-flying tournament with them. For me, it’s been great. Everything helps. A lot of people when I travel, ‘You were in Chikara? You were here. You were there. You were champion.’ I came out in a magazine, they had the Top 100 wrestlers, and I was one of them, so that gave me a lot of exposure in the United States.

“I’ve been everywhere. I’ve been grateful. I’ve worked Mexico, TNA, CHIKARA, NWA, I did a year in AAA. I’ve been traveling a lot. Everything is an experience for me.”

In TNA, Incognito was a member of Team Mexico along with Puma, Magno, and Shocker during the 2006 World X-Cup tournament.

He was modest about his fame, and whether the success abroad translates when he returns to Mexico. “I’m normal. When I get home, a lot of the friends that I speak with, that I talk with, they’re happy for me. Probably there is [some jealousy] but they’re not going to tell me. The thing that I can just concentrate on is training hard, becoming better every day, getting my talent out there.”

Coming to Canada for the first time was a lot of fun.

“It’s my first trip to Canada. It’s been great. The people have been awesome to us. They treated us well. The crowd was awesome. They enjoyed it I guess! I don’t know if it’s been the first time they’ve seen Mexican wrestling, but for us, it’s been great,” he said. “We went to Niagara Falls. That’s amazing. Toronto is beautiful as well. We’ve been around, been to a mall, been looking around. There’s beautiful women here also — I can tell you that because I’ve walked the streets.”

Though his true identity remains a closely-guarded secret, Incognito finds himself in the odd spot of proving that he was Mystico before there was a better-known Mistico. 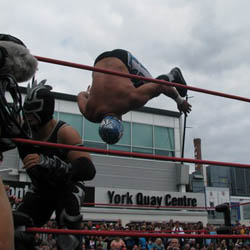 Incognito flips out of the way of El Sombra. Photo by Greg Oliver.

“I still work as Mystico. Unfortunately, I don’t know if people are familiar with that, they copied my name in Mexico City. I just did an interview in Mexico for a big company … They were talking about the names and everything. I took the magazines that I have, everything that I have that tells that I was the first Mystico, before that guy. Unfortunately, it’s a legal matter right now, so a lot of the companies, they don’t want to book me as Mystico because then they might have to do all that legal stuff. So I still work as Mystico. They put me as Mystico de Juarez. … I go to California, they put me as Mystico, I wrestle in El Paso, Juarez. It’s just the way it is. The most important thing to me is that people come to see the lucha, so people can see our talent.”

It’s not like it is a night and day transformation from one name to the other.

And if he has his way, people will be hearing far more about Incognito … or Mystico.

Greg Oliver just owns one lucha mask, and has no difficulty remembering who he is. Remembering what he did a few hours ago, however, is becoming an issue. Greg can be emailed at goliver845@gmail.com.