Storm gets emotional after ROH loss to Hero

TORONTO – An emotional Lance Storm took to the microphone last night after a loss to Chris Hero in the main event of Ring of Honor’s Death Before Dishonor VII: Night 2. And while he started off serious for a minute, his demeanour soon changed, and he tearfully thanked the crowd for their support over the years.

Lance Storm reacts after losing to Chris Hero, and later salutes the fans, at Saturday’s Ring of Honor show in Toronto. Photo by Andrea Kellaway, www.andreakellaway.com

Storm said he didn’t know if this was, indeed, his last-ever match in pro wrestling, which has been “my life for 18 years.”

Certainly judging by his performance in the finale, Storm can still go. His bout with Hero, more than a year in the making, started and ended with a handshake. The match was more grounded and less stuffed with highspots than most of the card. At times there was chain wrestling, or a slap fest.

When Storm caught Hero in the Canadian Maple Leaf single leg sharpshooter as Hero slid through his foe’s legs, the crowd went wild, sensing a dramatic ending. Instead, Hero fought his way to the ropes, eliciting boos.

Thinking he had things under control, Storm went to the rope turnbuckle and leapt, only to miss Hero. A Rolling Elbow (with a loaded elbow pad?) knocked Storm out and gave Hero, who was seconded by Shane Hagadorn, the win.

“Just another night where I feel like I’m sitting on top of the world,” Hero posted on Twitter after his match on Saturday. “The positivity and progression continues.”

At the end of the evening, Ring of Honor owner Cary Silkin was also very positive following two straight nights of action in Toronto — and optimistic about Storm.

“I asked [Storm] if he might do another one for us, but he wouldn’t commit. It’s wrestling, you never know,” Silkin admitted.

He raved about Storm’s participation in ROH. “To have a guy who was such a good name, also a guy who had quote/unquote retired gracefully, so when he does an occasional appearance, chooses to come with our company because he sincerely believes in our type of product and the quality of the product we’re putting out is very special.”

Also very special was an autograph signing prior to the show by “The Nature Boy” Ric Flair. The line for Naitch lasted more than three hours, with doors opening at 5:30 p.m. for a 7:30 p.m. start for the live show.

This is expected to be Flair’s final appearance with ROH — at least for awhile. In the ring, he addressed his history in the city. 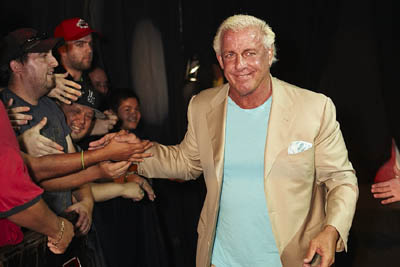 Ric Flair comes to the ring on Saturday night. Photo by Andrea Kellaway

“I love Toronto,” said Flair, joking about past marriages in Niagara Falls, and recalling the fights coming out the back of Maple Leaf Gardens, just trying to make his way to the nearby hotel. Once there, he bragged about rocking all night long, and that “Canadian women can go.” He also made mention of WrestleMania 18 at SkyDome (now the Rogers Centre), where he fought Undertaker, and acknowledged that, “I didn’t know I could still go.”

In Ring of Honor, Flair said he had “met a lot of wonderful young men” who were always “respectful.”

He refused to say goodbye, and instead said he would see us all soon.

Flair’s stories from the past intrigued Silkin. “Toronto’s great. The crowds are enthusiastic, they’re knowledgeable,” he said, referencing “the very rich wrestling history that has gone on for many, many years. Our crowd is younger, for the most part, but it seems to be more historically aware crowd. There’s just a different level of fan here. I love coming here. We’re looking forward to November.” (ROH returns to the Greater Toronto Area on November 14 for a show in Mississauga.)