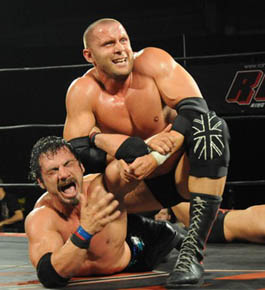 All four contestants got their licks in from the onset, and it was odd seeing McGuinness cheered as a babyface. Black took control of the match early, giving way to McGuinness, who landed his signature “The Tower of London” from the apron to the floor on Lynn that electrified the crowd. Lynn rebounded to piledrive both Aries and McGuinness, only to get immediately flattened by an opportunistic superkick from Black. McGuinness tried to use several armbar submissions on Aries and Black, but also to no avail. Aries took some punishment early, and hung around to ultimately land a 450 splash on McGuinness for the victory.

McGuinness appeared injured afterward, needing several minutes and some assistance to return to the back, while Black and Lynn nervously hung around.

The main event symbolized a night of solid all-around wrestling with a lot of Canadians putting in good performances.

Kevin Steen and Lance Storm looked impressive as they tagged up and defeated Chris Hero and Davey Richards. There was no hint of ring rust with Storm, who was the focal point of the match. No moonsault off the top from Steen this time around, but he landed most of his repertoire, including a Canadian Maple Leaf along with Storm, in the centre of the ring. The duo finished things up with a classic Hart Attack, in a nod to the Hart Foundation.

Kenny Omega — who resembled Psycho Sid with those blonde curly locks — challenged Aries to a match at tonight’s show after collecting a win over Kenny King. King had plenty of chances to put the match away, but even with Rhett Titus at ringside, met his demise with a Hadoken-fireball-type finisher that Streetfighter’s Ryu would have been proud of.

Sonjay Dutt and El Generico wrestled to a 15-minute draw in an entertaining matchup. The crowd chanted “five more minutes” which Dutt quickly doused cold water on. The former TNA star executed a nifty mid-air Frankensteiner-type reversal that was probably the technical highlight of the night.

D-Lo Brown received a warm welcome, putting away Frankie the Mobster in his usual fashion.

The Briscoes, sporting their Confederate duds, dusted off the Super Smash Bros. This was a good, rough-and-tumble match — a Briscoes hallmark — and featured a nice double-football tackle spot that had them looking like a pair of Chicago Bears. 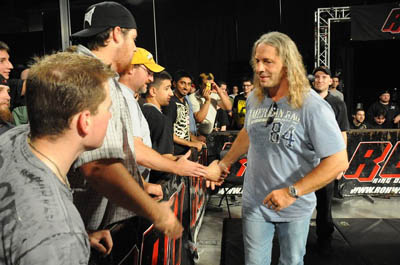 After the intermission, Hart addressed the crowd and received a massive pop as he put over Ring of Honour. “This is how wrestling should be,” he summarized.

Fans lined up early to get a chance to see the Hitman, who arrived casually to the arena around 5:45 p.m. to the delight of the fans. There was a steady lineup for him four dark matches into the show.

The lingering garbage strike and the mounds of trash currently stored at the Ted Reeve Arena in Toronto’s east end ended up being more of a footnote than an issue to the proceedings. The focus remained on the wrestling, which was a relief to ROH president Cary Silkin. “It (the strike) sort of happened after we had the thing booked, but the funny thing is — and you can attest to this — I was expecting stacks of garbage everywhere. I thought the fans would be lining up,” he said to SLAM! Wrestling. “They reported smells of an epic nature. But lo and behold, we get here and yes, there’s garbage, but the garbage is way in the back, a hundred yards away from the building,” he laughed. “Nothing in the front. The arena is clean as a whistle.

“It was bad publicity, bad timing. It’s a serious problem, but it was reported a little over the top. The people who ran the facility were helpful and assured us that it was not as bad as it was being reported and they were right.”

“We’re glad to be back at the Ted Reeve Arena,” added Silkin. “The last couple of shows we were in Markham, which was a good gig, a good facility, but a bit removed from Toronto, so we’re really happy to be here.”

Ring of Honour announced that they will return to Mississauga on November 14. Hart will also appear in the upcoming ROH Chicago and New York shows.