Ever wonder what happens backstage before a WWE show?

Rene Goulet, a former WWF wrestler and road agent, agreed to set the record straight recently and lays it all out on Inside The Office with Rene Goulet, a new DVD from Kayfabe Commentaries. 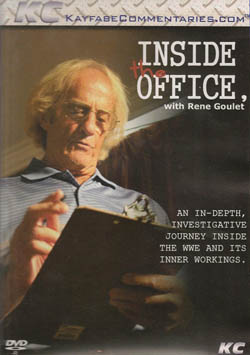 This DVD isn’t quite on the level of a shoot interview, but it is quite intriguing and will make those fans that feel they know it all when it comes to pro wrestling learn a thing or two.

Moderated by Kayfabe Commentaries co-owner Sean Oliver, the 80-minute disc is divided into four chapters`– The Agent, The Agent’s Job, TV Tapings and Yesterday/Today. The first chapter is only about five minutes long and basically tells how Goulet became an agent back in 1984 and worked with other agents such as Arnold Skaaland, Jay Strongbow and Pat Patterson.

The second chapter is very solid as Goulet goes into detail about what an agent’s role is. He goes over what happens at house shows, how the agents work with the booker (creative team to you newbies) and touches on what wrestlers were difficult to work with. He doesn’t name names, though. Goulet also talks about filing reports after each show and discusses what is part of a bad report. Fining wrestlers for being late also gets air time as does what wrestlers do when their matches are over, a dress code for the wrestlers and agent meetings.

As this DVD plods along, you get a sense that Goulet genuinely liked being an agent and has no hard feelings from his time working with the WWF. He cracks a smile here and there recalling a particular story, especially ribs played by Mr. Fuji.

The TV tapings segment is next and Goulet talks on how things ran when taping three weeks’ of shows in one day. Sounds like things haven’t changed much in how matches and promos are arranged. Goulet said Hulk Hogan and Gene Okerlund were great together during promos and that Hogan was a machine when it came to promos.

In the final chapter comparing the past and today, Goulet said the ’80s and ’90s were pretty similar and as an agent, Goulet never changed in that he never took any BS from the wrestlers. He also says Madison Square Garden is the best place to work and adds he was always treated well by the company due to the fact he always worked hard.

The interview wraps-up with Goulet talking about when he was released in 1997, over the phone by Jerry Brisco, and not by Vince McMahon. Then 65, Goulet said he was ready to retire, but didn’t think it would happen that way. He added again that he felt he always worked hard and was even the first in the WWF to use a computer. He even says his wife was happy when he was let go.

Goulet really shows the viewer what goes into producing an event, whether it’s a house show or a TV show. You very much get the feeling that you were there in his shoes. Even the way he was fired shows that the business can be very cutthroat and that continues to this very day. But to hear it from someone that actually experienced it, this DVD definitely hits on all highs and lows of working for the WWE.