If Dan Hodge was competing today, it is more likely he would be a star mixed martial arts fighter rather than pro wrestler. Hodge was a prolific amateur wrestler and professional boxer long before Randy Couture and Brock Lesnar were household names. Hodge is also the subject of the new book, Oklahoma Shooter: The Dan Hodge Story, by Mike Chapman. 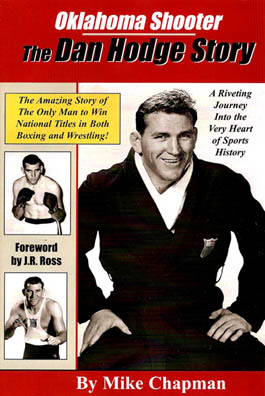 Dan Hodge was born in Perry, Oklahoma in 1932 at the height of the Great Depression. From an early age, he worked in the cotton fields and milked cows. Hodge was the second of four children. His father left when Dan was very young and he was forced to go live with his alcoholic grandfather. It is obvious life was not easy during the formative years for Dan Hodge.

By the age of 19, Hodge had married his high school sweetheart and had joined the naval reserve. Hodge had been an amateur wrestler of some note in high school but it was at the Great Lakes Naval Training Center he really developed his abilities. Hodge reached a level where he could try out for the 1952 U.S Olympic team. Hodge overcame great odds and made the team. He did not fare so well at the Olympic games in Helsinki, Finland but was on the road to a great amateur career.

After his two-year commitment was finished with the navy, Hodge decided to attend the University of Oklahoma and be a part of their wrestling program. Hodge became a living legend at the University of Oklahoma. He was never taken down from the standing position while in college and went undefeated at 46-0. He was the only amateur wrestler to have been on the cover of Sports Illustrated. It is not surprising that Hodge would find success at the 1956 Olympic games winning a silver medal in freestyle wrestling.

Hodge attempted to capitalize on his amateur and Olympic wrestling careers by becoming a pro boxer. It may not seem to be the most obvious career choice for an elite athlete in one discipline to cross-over into a completely other domain. Hodge was an accomplished wrestler and also had an interest in professional boxing. Hodge was persuaded to become an amateur and then professional boxer. While won the 1958 Golden Gloves tournament in New York City and had a professional record of 8-2, Hodge never found professional boxing to be a rewarding experience. He thought it was dominated by promoters who were dishonest and not interested in the well-being of their fighters.

Suffering from disillusion towards pro boxing, Hodge decided to give pro wrestling a try. Hodge contacted Tulsa, Oklahoma promoter Leroy McGuirk and fought his first professional match in 1959. Hodge was trained by the noted professional wrestler, “Strangler” Ed Lewis. Hodge would gain his greatest fame as a pro wrestler. He had a very straight ahead style and did not rely on gimmicks to go over with the crowd. He was also highly respected as having the ability to wrestle a “shoot” match if called upon to do so. Wrestling historians and fellow pro wrestlers always rank him in the top ten as the toughest and most technically sound. 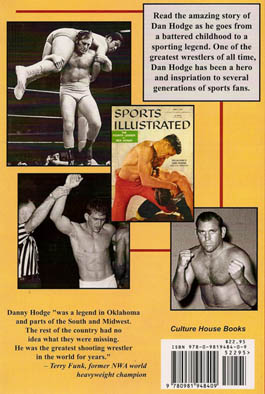 Because of pro wrestling, Hodge toured all over the United States and Japan. He was perennially the NWA World Light Heavyweight champion. Hodge retired from pro wrestling in 1976 after suffering a near fatal car accident. He still lives in Perry, Oklahoma and is regarded as a living legend in Oklahoma.

Author Mike Chapman should be commended for bringing a wrestling historian’s eye to this book. It is very well researched and written. Chapman is the founder and director of the Dan Gable International Wrestling Institute and Museum and has written 14 books about wrestling. He obviously has the credentials.

It would seem Chapman was given great access to Dan Hodge. This is not an autobiography written from a distance. One could imagine that Hodge and Chapman spent hours in conversation. The book does not read as a private two-way conversation. There are many funny anecdotes and quotes from numerous sources.

The photos included in the book also greatly add to the story. Hodge provides some of his own personal photos and Chapman calls upon a variety of sources to provide photographic depth to the subject matter.

Any fan who is looking to read a riveting history about a true wrestling living legend should pick up Oklahoma Shooter: The Dan Hodge Story.