PHILADELPHIA, PA – The Legends of the Arena show, which saw many stars of the original ECW return to Philadelphia this past Saturday night, had been referred to by some participants as an extreme family reunion. And that’s an appropriate comparison. Like most family reunions, it started off with happy greetings and the sharing of memories. And ended off with beer, blood and broken tables.

The event, organized by Extreme Queen Francine as a fundraiser for cancer research, brought over 30 of the men and women who wrestled regularly in The Arena when it was the home base for ECW back in its heyday. Once again, they provided some fantastic moments and memories for the fans in attendance.

The event started with an autograph/meet-and-greet session for VIP ticketholders. Fans got the opportunity to meet every wrestler that was in attendance –- save for one who made a surprise appearance later that night -– and ask them some questions, pose for a picture, get their autograph (VIP holders received a free 8X10 of each of them, but most would sign anything else you brought as well), and maybe buy some of their own merchandise (Terry Funk shirts sold like hotcakes). 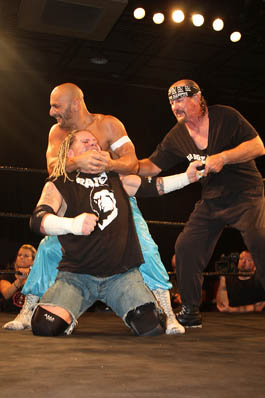 After that, was the BBQ lunch, held behind the Arena. Highlights here included Jamie Dundee (known to many as JC Ice of PG-13) holding court and sharing with people his views on everything from the death of Michael Jackson and Canadian hockey fans, and mocking other wrestlers for some of their ill-fated past WWE gimmicks (“I love you, Aldo Montoya!”). Others watched a surreal family moment as the Sandman and his sons, including Tyler who was once part of his classic storyline feud with Raven, played softball in the parking lot. 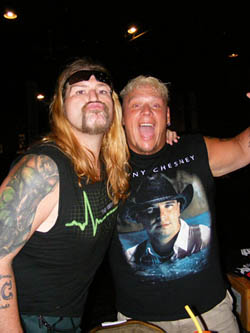 Back in the building then for the Legends Q&A session. With all of the stars seated in the ring, fans were able to ask any of them about virtually anything. While it started off awkward, with fans maybe a bit reluctant to speak out, this soon changed and soon everyone was having a good time. Funk’s ability to spin a yarn was in full force, as he talked about growing up in a wrestling family, in addition to his time with ECW which he heavily praised. More than a few road stories were revealed, including a funny one about the night Francine hid Sandman’s stash of illegal substances in her underwear. When the group was asked for their collective views about TNA Wrestling, everyone turned a wry smile to Rhino, a mainstay in that company (“It’s great,” he said. “Like all things, there may be some kinks in the road, but we’re on the right path.”). Nearly everyone had something to say, so the process was not unlike a sample platter of shoot interviews.

After the session, the rest of the fans were admitted, and after a second, smaller autograph session for them -– that was highlighted by the clowning around of Balls Mahoney and Axl Rotten –- the assembled mob took their seats for the show.

A touching tribute video showing clips of ECW, including screenshots of some of the family members who have since passed, built the crowd to a fever pitch, and when the lights hit, the building was filled with the chant of “E-C-Dub!” once more.

For the next two hours, it was like old times again. Original entrance music was used, classic wrestler-specific chants were dusted off and used at full volume, and for one night, everybody was ten years younger again. Detailed results follow, but based on the volumes of the crowd reactions, the bloody brawl pitting Axl and Balls against Da Baldies and the crazy spot-filled main event were definite favourites.

After the final bell rang, and the afterglow of the show dissipated into the city streets, several of the wrestlers and fans headed to an after-party at a nearby hotel bar. Stories continued to flow, along with the beer, until closing time. And as everyone said goodbye with handshakes and hugs, one thought was universal: I hope it’s not too long before the next time the family all gets together again. 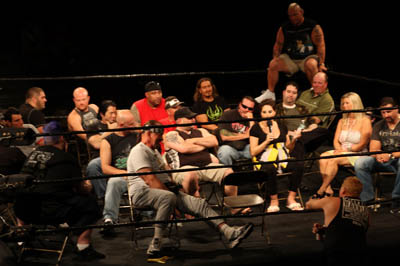 The group question and answer session.

Legends of the Arena – detailed results

After the crowd was treated to a new dirty poem by Joel Gertner (somebody put this man on TV now), the show kicked off with…

This was a really good match, with Scorpio hitting some dazzling offense. He ended things with a somersault legdrop for the pin, and then after the match followed it up with a moonsault legdrop.

As both of these characters were low to mid-card talent in the final days of ECW, fans thought this would have been the perfect match for New Jack to make an appearance. It seemed to be the case when the Original Gangsta’s music started up midway through. But this was only a ruse, as the momentary distraction only served to distract the Musketeer and allow Wesley to get the rollup win.

Storm’s pre-match promo, in which he claimed that Taz had declined his challenge for the night, had the crowd hoping that the Human Suplex Machine would make an appearance. It was not to be, but that didn’t stop Hamrick from unleashing a nation of violence on the former FTW Champ’s behalf. This one saw a piece of the ringside barricade come into play, unfortunately for Hamrick’s back. He was able to recover and clamp on a Tazmission to get the tapout win.

It looked early on as if Dundee had received a dose of Da Clap from Riggs as the two teamed up in this three-way match to batter the big man. But after a GORE on Dundee, Riggs left the ring and allowed the original ECW’s last World Champ to get the pinfall.

Sabu and ECW founder Tod Gordon were inducted into the Arena’s Hardcore Hall of Fame. Gordon brought his son and daughters into the ring where he thanked them and all the fans, while Sabu let his manager Bill “Fonzie” Alphonso do the talking for him. The Sandman made an appearance and suggested that the two co-main events be combined to tag Sabu and Sandman against Justin Credible and Raven.

As can be expected in a Philly Street Fight, this one spilled into the crowd early. Da Baldies, joined by heel ref HC Loc, got the advantage, but soon felt chair death.

Match Six – The FBI vs the Blue World Order

This was the comic relief of the night, with the match starting off with a dance-off. Little Guido did all right, but things got derailed when Big Sal E. Graziano busted a move. The bWo parodies continued, with Meanie doing John Cena’s You Can’t See Me fistdrop and Nova pulling out Hulk Hogan’s Legdrop of Doom. The bWo won after a double-team on Guido. Fun match.

After teases of New Jack and Taz, nobody was sure what would happen when it was announced that Shane Douglas wouldn’t be able to appear at the event to take on Snow as scheduled. So when the lights went off after Snow’s introduction, people may have been a bit skeptical. But when the lights turned back on to see Jerry F***’n Lynn in the ring, the crowd became unglued. This was a change of pace from the other matches, in that it was very technical and told a longer story. Snow’s attempts to use Head were continually thwarted by the ref. Finally, frustrated by Lynn’s in-ring brilliance, Snow took a different tactic. He grabbed a front row fan’s souvenir ringside chair and, in tribute to Eddie Guerrero, pretended that Lynn had knocked him out with it. As the ref tried to figure out what was going on, Snow grabbed Head from out of the corner, walloped Lynn with it, and stole the win.

This was a complete fustercluck, but an incredibly fun brawl. In typical ECW fashion, tables, ladders and chairs were used with reckless abandon. Tyler Fullington came in to help his dad’s team, but he was quickly kyboshed by Raven. So, one of Sandman’s younger sons came in to deliver some justice with a DDT on his father’s nemesis. In the end, Sabu and Sandman got the win.

Overall, a fun night of extreme action – and a worthy purchase if it is ever released on home video.

“Bloodthirsty” Bob Kapur barely ran all the way up the Rocky steps without stopping. His poor showing convinced him to pass on a second cheesesteak for breakfast. He can be emailed at bobkapur@hotmail.com.