If you ask almost any TNA wrestler what the benefits of working for the promotion is, for many the top one is the opportunity to continue to work for independent wrestling companies. Such is the case with LAX’s Homicide.

The Latino superstar is no stranger to the independent scene, having worked his way up on shows in the Northeastern U.S., including a brief reign as Ring of Honor Champion, before becoming one of the hottest acts in TNA. While he loves the opportunity to be part of a national company, his heart still lies with the smaller shows. 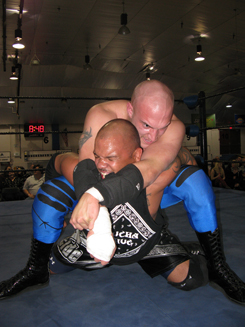 “It is more of a freedom thing doing independents. I am a TNA wrestler, so when I am there I have to stick with the rules. When I do independents, that word means freedom. The promoter tells me to just go out there and have fun, and that is my secret I like to have fun. I go out and be what Homicide really is, entertaining people,” Homicide recently told SLAM! Wrestling. “Being booed or cheered it doesn’t matter, I just want to have a good match and see the crowd mad, upset, and happy. There is a difference between Notorious 187 the lucha thug and LAX Homicide; they are two different people. LAX Homicide is more PG 13 style, Notorious 187 is more NC 17 don’t give a crap about nothing, wanting to go out there and have fun. It is the same as the TNA version, but I have more fun in independents.”

Homicide chatted with SLAM! Wrestling before a recent Prairie Wrestling Alliance show in Calgary, which also included A.J. Styles. He faced local star T-Bone in Calgary. The night before in Edmonton, he faced one of the hottest rising stars in the company in Chucky Blaze. For Blaze, it was a chance to prove himself against an international star.

“Getting to work with Homicide was amazing, definitely the biggest thing I’ve done in my career so far. It was a real learning experience. Getting to work in front of a crowd of over 500 people with someone that is as good as he is, is an opportunity that any young wrestler would kill for. I’m not sure how I can ever thank PWA, Kurt Sorochan, Don Ferguson and Homicide himself enough for letting me have that opportunity,” Blaze said. “It was funny because I actually didn’t get told I was going to be wrestling him. I found out when I got to the show and looked at the booking sheet, I almost fainted ’cause I was so shocked. I’ll never forget that match, it was my first big chance to be in the ring with a big name. He taught me so much in just those 15 minutes and talking to me after the match. Plus getting to take the Cop Killa? Awesome!”

Homicide was grateful for the show of respect, but finds it strange to be looked at in such a manner.

“To me it is funny to be looked at like that. I am a very humble person and don’t let my ego slide. When someone says something like that I am like, ‘Come on stop it! I am just a regular person like you.’ Because I am on TV that makes me special? I do appreciate it, it is a blessing in disguise. These guys treating me like this is a respect thing and I want to give them respect back. A lot of legends in this sport don’t want to give these young kids the torch. It is the only way wrestling can be alive, it is like a heart beating,” he said before commenting on Blaze.

“With Chucky, I didn’t know him at all. He could be the future of wrestling. We went out there, we performed, he took all my beating. I was like, ‘Dude, you got something special.’ I started when I was 18 wrestling guys like Terry Funk, Abdullah the Butcher, Savio Vega and I was like, ‘Oh my God, I am wrestling these guys!’ They kicked my butt and look where I am now. Chucky needs to be cool and patient and maybe the next five years, you will see him in the big time.”

Over the weekend, Homicide paid tribute to Eddie Guerrero with the three amigos suplex as well as Bret Hart by using the sharpshooter. Much like the young wrestlers he faces, these tributes are about showing respect.

“I always have respect for the men that turned this business around. Eddie Guerrero was my friend and a great man and doing the three amigos is a shout out. It is not my move it is his. The frog splash came from Art Barr, and he passed away and Eddie took it over as a tribute. I wasn’t his best friend but I did know the man, and he put the Latinos, especially the cruiserweights, on the map. He was a former heavyweight champion and made myself, Hernandez and people like the Colon brothers really huge in the wrestling game. So when I do the three amigos it is a way of thanking Eddie for making us proud of everything he had accomplished. Bret Hart is the same thing. He is one of the best technical wrestlers of all time. I have high respect for him and am in Canada so I am showing my respect by doing the sharpshooter to say thank you for him being a wrestler that we could follow in the footsteps. Doing the sharpshooter in Canada was a blessing, it was great.” 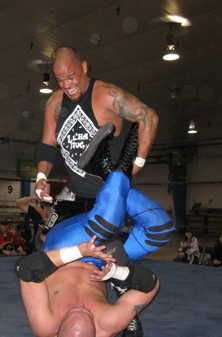 Homicide pays his respect by slapping the sharpshooter on T-Bone at a Prairie Wrestling Alliance show in Calgary. Photo by Jason Clevett

Anyone who has followed Homicide’s career will find it amusing that one of the highlights of the weekend was meeting members of the Hart family. In 2004, Homicide and Teddy Hart beat the living daylights out of each other legitimately in matches around the east coast. It was odd at first to not only walk into Hart territory, but also meet and talk to Hart’s mother, Georgia Annis.

“I had butterflies in my stomach because this is Hart territory. When you see the Canadian flag you think about the Hart family. Bret, Owen, Nattie, T.J., D.H. Smith. Me and Teddy Hart had this great chemistry where we hate each other but when we went out there we made wrestling so real. That was the most underrated feud in the world. Feuds like Bret Hart and Shawn Michaels, Abdullah The Butcher and Carlos Colon, people talk about those as great feuds but they don’t talk about Teddy Hart and Homicide. It is very underrated. People need to open their eyes and see that feud that happened. Me coming to his territory is like a gangbanger coming to a Crips or Blood territory. I had butterflies. I got that attitude that I don’t care, but I respect the Harts and being in Teddy Hart’s home. I think I did great going to his country, meet his mother and family and they are all great people. I was very surprised because I kicked his ass for one year, and he is a good person to represent Canada and the Canadian culture of wrestling.”

The chance to continue to prove that Latino wrestlers are some of the best in the planet, whether on TNA or in community halls, keeps it fun for Homicide.

“When we started as a bunch of Latinos that wanted to take over, we wanted to prove that Latinos can be great wrestlers. You look at the great Mexican wrestlers like Dr. Wagner, El Hijo De Santo, Mil Mascaras, and the great Puerto Rican wrestlers like Carlos Colon, Savio Vega, Carlito and Primo. We wanted to bring our A-game and show the United States that we were Latino and taking over. We went out there with a bunch of harsh words, calling people gringos, forget you white people it is all about us. For some reason the people loved it, they liked the realistic image. It is like a movie, you see a movie like Scarface, Tony Montana is a villain but people love the villain. We were so cool as a bad guy people related and had fun with it, and we became ourselves and people liked that. We weren’t characters; the only character is my name. It is legit. I used to be an ex-gangbanger. Things that I did, I shouldn’t be in the world right now. I’ve made mistakes but I brought that realism to the wrestling game and people love it.”