Justin Credible isn’t just the coolest and isn’t just the best. Between promoting a huge wrestling convention for later this summer, and wrestling regularly on the indy circuit – including this weekend’s Legends of the Arena show – he’s also going to be just insanely busy. 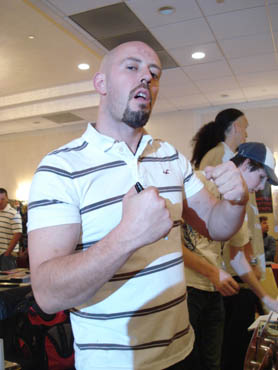 Justin Credible at the Legends of the Ring convention, October 2008. Photo by Bob Kapur

Tonight, along with a host of other stars that made their names in the original ECW, Credible returns to the fabled Arena in Philadelphia for the Legends show, a fundraiser for cancer research organized by the Queen of Extreme, Francine.

Cancer research is a cause that has a personal significance for Credible (real name Pete Polaco). As he recently announced on his website, his father was recently diagnosed with prostate cancer. “It certainly gives this event more meaning to me now more than ever,” he told SLAM! Wrestling via e-mail.

But that isn’t the only motivation for appearing tonight – indeed, his father’s diagnosis came long after Credible had signed on for the event. Rather, it’s a great opportunity for catching up with old friends one more time.

“There are so many things I’m looking forward to (tonight)”, he said. “Getting to see all the boys again, getting to wrestle in the arena again.” At the show, Credible will be facing off with another former ECW Heavyweight Champion, Raven, about whom he only said had “better bring his A-game”, as he expects the two to tear it up in the ring to deliver the goods for the fans in attendance.

For his part, Credible should be able to live up to that promise. Though he doesn’t wrestle on a national scale anymore for WWE or TNA, he has been quite busy on the independent circuit as of late. In particular, he’s been a regular for the Massachusetts-based Big Time Wrestling, and is currently the company’s champion. Between their shows – “(BTW) runs at least once a month, but can be up to four shows a month” – and various dates for other indy companies, it’s a wonder Credible can still have time to book his wrestling convention.

That would be Justin Credible’s Icons of Pro Wrestling , which will be held on Sunday August 2 in Cromwell, Connecticut. Appearing at the event will be legends Terry Funk, Harley Race, Bob Backlund, and Ox Baker, and other great names of the business like DDP, King Kong Bundy, and ECW icons Axl Rotten and Balls Mahoney. In addition, Scott “Razor Ramon” Hall, Credible’s friend from when they both wrestled for WWE, will also be on hand and will be awarded with the first “Rebel of Wrestling” Award.

Hall is the perfect recipient for such honours, according to Credible, who has nothing but praise for his friend. “Scott Hall defines the word rebel. He always did things his way, going against the grain.Scott took the risk jumping to WCW from WWF, and redefined the business as we know it. The business would be very different if Scott Hall wasn’t Scott Hall. That’s why he deserves this award and I’m proud to present it to him.”

With all of those events on his schedule this summer, it’s a wonder that Polaco can even have time to breathe. Or maybe it just comes with the territory when you bill yourself as being Justin Credible.