The “third man in the ring,” so to speak, in Rob and Sonya Van Dam’s journey with colon cancer, was the City of Hope’s Dr. I. Benjamin Paz, who was Sonya’s primary oncologist during her journey. His perspective on the disease offers much insight. 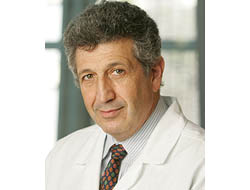 It may surprise one to learn that Dr. Paz, who is of Chilean background, was not initially aware of Rob’s wrestling career.

“Never, I was a soccer player,” he laughed when asked if he was a wrestling fan. “Wrestling was not even in my radar screen. We were talking in the ER and we were talking about the most watched pay-per-view program is this mixed martial arts. The first thing I said when I heard what they were talking about was, ‘What the hell is this?’ It was the first time I had heard of it,” he laughed again. “I watch one hour of television a month.”

He broke down his philosophical approach to cancer for SLAM! Wrestling.

“Colon cancer is the third most common cause of death by cancer in American people, beginning with cancer of the lung, followed by breast cancer, prostate cancer, and then colon cancer. What we are close to is understanding the logical approach to cancer so we can basically visualize care for each patient instead of doing this approach that is the same for everybody, that works for some people and doesn’t work at all for others,” he began. “We’re closer to being able to understand the people that will benefit from the therapies that we have now and why other people don’t benefit from them and then build therapies for those that don’t benefit. I don’t think you can talk about cancer the same way you can talk about heart disease, for example.

“When you talk about AIDS, you are talking about a complex virus, that you have identified clearly the cause, you know the method of action, and you decide potential treatment even if you cannot cure the people. The majority of cancer, we don’t even have a clue of what starts the disease. We think more and more, that gets started the development of the cancer is the stem cell. Let me explain that concept. Until now, we thought that a cell, let’s call it a muscle, or a cell of the bowel wall. Basically a cell that you can see basically went whacko at one point and developed cancer. That doesn’t seem to be correct.

“Those cells already differentiated into what they carry; they already became muscle they already became skin, or a bowel wall. Those cells don’t seem to have the potential even to transform themselves into anything else; the only thing they can do is die. But we all have what we call the stem cells; these are closer to the cells that at the time of the development, the cells that can become anything. They can become muscle, bowel, that leads to a human medium. These stem cells which are in are part of our embryonic development seem be in all the tissues, and provide the regeneration of those ‘normal’ cells and they are also extremely in the repair of damage. So whenever you get an injury, they are an important repair mechanism especially in the restoration. So these are the cells are not exactly the same that you had in the egg; they cannot transform into anything. They have undergone at least one level of differentiation, so they can transform only into muscle or nerves, for example. These cells seem to be everywhere and they apparently are that potentially are susceptible to tumors, because they have the potential to actually grow. That is a very important concept, shaking completely upside down our concept of how cancer develops and where it ends up.

“Why is it so important? The stem cell issue holds the clue to a lot of other problems, far more important than even cancer. If I can control the stem cells, now I can potentially start to solve the problem of diabetes. I can develop and find the cells that develop the cells that produce insulin and if I can regenerate those cells, then the liver can regulate its sugar without the need for assistance. Or let’s say that someone is born with a birth defect, born without a protein, like hemophiliacs for example. I can solve that problem too by getting their stem cells to differentiate and insert the new protein into the cell to correct the problem.

“The stem cell is a very important repair mechanism. Potentially we can solve the problem of patients that are paraplegic; they lose a function as a consequence of an injury. This has far greater implications than just treating cancer.

“The stem cell theory in oncology is very important for ultimately preventions strategy in cancer and also screening and potentially managing those cancers in the future, but they are also far more important in the knowledge the individual will have in the management of other common diseases.

“I think that in our minds when we talk about cancer and diseases, we all seem to think like polio: ‘Well, we eradicated polio, so maybe we can eradicate cancer.’ I’m not going to say that we will be able to control cancer, because who knows what will happen in the next 100 years. But I’m fairly positive that cancer as an element, as an occurrence, will not be there because it is about biological processes. Biological processes like any other process cannot be controlled entirely, in the same way we cannot naturally control having twins or having a boy or girl.

“That’s why stem cell is so important. It will affect the understanding of all the biological processes and have far reaching implications in how we will live and what our quality of life will be in the future.

“We try to initiate the first treatment — whatever the treatment would be — within two weeks of their diagnosis, whatever treatment it is. It might be surgery, chemotherapy, radiation and strictly, we want to do it in the first thirty days. It’s not that’s it so critical in terms of they are cured or not; it’s critical to the patient. Frankly, if you asked me if two weeks versus 30 days is a big difference, the answer is categorically no. But it makes a difference to the patient. That’s what matters.

“It is not what I perceive, but what the patient perceives.”

“My father is 76 and he had the same therapy,” he continued. “He goes to work everyday; he has a normal life. He feels sick a couple of days from the treatment, but aside from losing his hair, you couldn’t tell he’s getting chemotherapy. There’s many ways to help patients.”

Moving on to his observations of the Van Dams, Dr. Paz was just as thorough.

“The most important thing to think about when you face a problem is like this is not survival. Survival is a word that we always talk about in the context of cancer or any life-threatening situation. Survival seems like you are clinging to life; this is different. You want people to be able to dream again, to have hopes, to think about tomorrow without worrying, to form a family, go on a vacation, that’s what we are talking about. I think our job is to help patients achieve that again. So in the beginning it is a life-threatening situation but you want to overcome the fear of living again,” he reasoned.

“Yes, there are risks, but we all have risks. We are all going to die, so death is not the issue, but becoming conscious of the possibility of dying. We have to help people overcome fear to the extent that they can understand the risk and give the patients the options they need to really manage their potential for death, then you are helping.

Dr. Paz also discussed some of the politics behind cancer research. “I don’t belittle people that want to make money out of treating patients; there’s nothing wrong with that,” he said. “As long as you’re working in a scientific and an ethical way to achieve better treatment for cancer and improve the quality and length of life of our patients, we are working in the same direction. The mission of our institution is to overcome and treat cancer, both post cancer problems as well as the disease per se. and hats off to anyone who has an efficient curiosity to overcome it in a logical way.”

Finally, Dr. Paz also shared some the things one can do to help prevent colon cancer: “You want to establish yourself on a good diet, in the sense of four-five servings of fruits and vegetables a day, make sure your diet contains fibre, standard recommendations from the American Cancer Society, you want to exercise normally, and then you want to be screened for cancer,” he said. “Colonoscopy not only screens patients for colon cancer but also removes the polyps. It’s not only a primary, but a secondary prevention because they cure the problem before it occurs by removing the polyps.”

Kenai Andrews is Media Relations Director of SuperEyeSpex Optical and the Senior Writer for new Caribbean culture based Yush Magazine. Email him at [email protected]. You can also follow Kenai at http://twitter.com/KenaiAndrews.