The article “I’m so sorry, sweetie” exclusively documented Sonya and Rob Van Dam’s journey with colon cancer. It was mentioned there that Sonya used cannabis, better known as “medical marijuana,” in her daily chemotherapy routine. Here, we explore in more detail RVD’s passionate defense of the substance that was briefly mentioned in that piece. To hear RVD’s argument, not only did it save Sonya’s life, but could save the lives of countless other patients, if it was only offered in a stigma-free, accessible option. 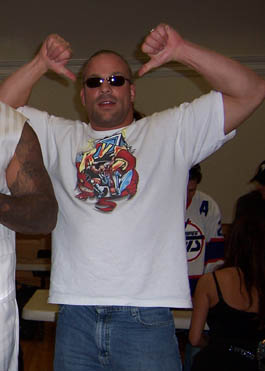 “As far as not being able to sleep at night, which is obviously another side-effect the cannabis helped tremendously with, so I would go to the hospital and talk to the oncologist, and ask why they don’t recommend marijuana for their patients. We’re in California and Proposition 215 legalized it for doctors to recommend it back in 1996. If there ever was a case for it, this is it; I mean we’re witnessing huge benefits from using it and we’re seeing other patients at the same hospital who are just wasting away, they would never even think about trying cannabis because they’ve been told it’s dangerous, it’s deadly, and it’s bad for you. I’ve always been a stickler for the advocacy, but now more than ever. Now people will actually listen. We had to go through this in order to get the credit for people to actually give it some thought and say, ‘Oh really? Yeah I suppose maybe that does help. Yes, it is medicine.’”

Currently, medical marijuana is permissible in fourteen U.S. states, including Van Dam’s state of California. The practice is also legal in Canada.

“The reason the that federal government has it outlawed is because they say there’s no medicinal value in it, even though we have a quarter of the country’s population now living under medical marijuana law, the federal government says there’s no medicinal benefit, it’s the most dangerous drug in a Schedule 1 controlled substance with heroin and acid, and it’s the most addictive. All of that is bull. When anybody is going through this, I try so hard to get them to at least do their own research, because no one has ever overdosed from it. There’s almost no substance on the planet that can claim that; we had somebody die from drinking too much water in a radio contest a couple of years ago. No one has ever smoked too much pot; it simply is not toxic enough, so I think that it’s important to mention that when we’re talking about how Sonya made it through this, because she was so strong and she was able to hold on to some quality of life while she was going through this six-month sentence of getting the chemotherapy for two days at a time every two weeks.

Rob described the process obtaining the product in detail.

“In California, any adult can go to what we call a medical marijuana doctor. They’re legitimate doctors who believe in the medicinal value of marijuana. And they give you doctor’s recommendations. There are tons and tons of them all over L.A. There are specific doctors that you go to, and it’s a doctor’s visit; you tell them what ails you, they check you out, and when they give you a doctor’s recommendation, it’s like a little driver’s license. You can take that to one of four hundred marijuana dispensaries we have in the L.A. area. You go and you actually buy your pot, just like you buy candy in the gas station. It’s a specific place where they just sell pot.

“There’s no alcohol, there’s no kids allowed in there, although if a doctor recommends to some kid with bone cancer that got his legs amputated might benefit from marijuana, I’m all for it, by the way. It makes a huge difference in how the patients feel, on or off, so that’s something I definitely don’t want to ignore. The doctors as it turns out as I talk to them about this are afraid of retaliation and so they don’t want to recommend marijuana. Because I know a lot of about it, in extensive conversations where I found the doctors will recommend Marinol which is a THC pill and it’s synthetic and I had to argue with the doctor. He’s telling me it’s pure, but I know that it’s not. They take the THC which is the active ingredient in marijuana and they replicate it and they put it in a pill form. I personally have tried the pill form; it’s nothing at all like the organic plant.

He has tried Marinol, and perhaps not surprisingly, does not recommend it, at least in terms of its effectiveness.

“Nothing at all. In fact when I got it, I was afraid that somebody slipped me something else. I was tripping off of it. There are reports of patients going crazy, suicidal. It’s not a pleasant experience but the doctors do that because they can make money off of it. They cannot make money off of a plant. You cannot put a patent on a plant, so the government has no interest in legalizing it.

Rob pointed to the current U. S. administration as a possible conduit of change.

”Hopefully things will change with [President] Obama, because he has vowed to quit arresting marijuana patients and like I said, we have a quarter of the population now living in 14 different states living in protection under medical marijuana laws.”

Kenai Andrews is Media Relations Director of SuperEyeSpex Optical and the Senior Writer for new Caribbean culture based Yush Magazine. Email him at [email protected]. You can also follow Kenai at http://twitter.com/KenaiAndrews.