In 1978, Lanny Poffo first came to the Maritimes with his brother and father to compete in Emile Dupre’s Grand Prix Wrestling.

Over 30 years later, a lot has changed, but one thing that remains the same is Poffo’s appreciation for and desire to return to Atlantic Canada. 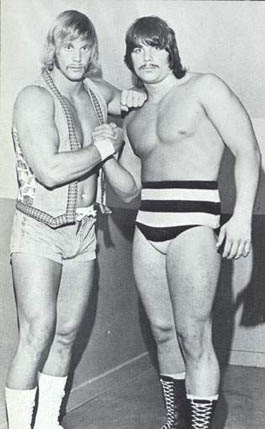 Randy Savage and Lanny Poffo in the late 1970s.

“I’m the kind of guy that likes to look around and do a lot of sightseeing,” Poffo told SLAM! Wrestling. “Some of the wrestlers didn’t take advantage of the fact that they got to go to all these places and all they saw was the inside of a locker room or the inside of a gym and I actually did the tourist thing. I was very impressed with all of it.”

In fact, Poffo’s greatest memories of his time in Grand Prix — which also included a tour in 1983 — don’t come from his in-ring time, they come from the tourism he did while in the region.

“I really liked Prince Edward Island and got to go to all the beaches, and the Cabot Trail [in Cape Breton],” he said. “I’m really looking forward to being there again at the age of 54.”

Poffo will join the likes of Leo Burke, the Cuban Assassin and Bobby Kay from June 27 until July 9, starting in Spryfield, Nova Scotia. The expedition also includes stops throughout Nova Scotia, New Brunswick and Newfoundland and Labrador.

“I’m putting this tour together for two reasons: to show appreciation to these men who were the driving force behind my success in pro wrestling and the second reason is to bring Leo, Cubie, Lanny and all the others in so the fans can have a chance to meet them all on a one-on-one basis,” said promoter Joe Dunlap. “This tour is all about the intermission. If it takes an hour, so be it. No one will go home saying they didn’t have enough time to meet their heroes.”

Along with the places Poffo can’t wait to return to, he’s also looking forward to his first visit to Labrador.

“I’ve never been to Labrador,” said Poffo. “I like going to places I’ve been. I also like going to new places and Goose Bay will be [one of them]. I’ve petted Labradors, but I’ve never actually been there.”

During his first Grand Prix tour, Poffo had the pleasure of working with his brother Randy — who of course went on to later fame as the Randy “Macho Man” Savage — and father Angelo.

“In 1978, the Macho Man Randy Savage was the main villain and I was the main babyface,” said Poffo. “We told nobody that we were brothers. Of course, word got out anyway. We were in denial because things were more kayfabe back then.”

With things being as secretive as they were, the Poffo brothers were forbidden from travelling together and if a heel and face were caught in public together, they risked being fired outright.

Every night when the two got back into the ring together, the brotherly bond was definitely there.

“[Randy’s] great,” Poffo said. “I just followed along, did everything he wanted and he knew how to make me look good. We had complete cooperation, which you don’t always get everywhere you go.”

The Poffo brothers’ feud was the hottest thing going in the Maritimes back then. Poffo says that every single night there were more people than seats and most of them came to watch the sibling rivalry.

“Randy beat me for the Atlantic Grand Prix belt and we set up rematches all over the place and that’s when we made a fortune there because that’s when they wanted to see me get my revenge,” said Poffo. “Of course, Randy went on to become one of the greatest interviews and workers around. The thing is, five years before he got his big break, he was already worthy of that break.”

Poffo also worked with fellow legend the Cuban Assassin in 1978.

“He’s terrific,” said Poffo. “He was a great ring general and he had a terrific gimmick and was really exciting. I always wonder why he didn’t get to the World Wrestling Federation.”

Aside from the sightseeing and reuniting with old friends, Poffo insisted on being a part of the entire duration of the tour so he could give something back to his fans.

“I just consider myself so lucky and blessed that I’m still in enough demand,” he said. “I’m trying to get in better shape so I don’t send the people to the popcorn stand when I get there. I respect the people that bought tickets to see this and they deserve the best show I have.”

Aside from his upcoming legends tour, Poffo still wrestles around the world with upcoming bookings in Canada, the U.S. and even Poland.