TNA heads into a town that has been the poster child for the downed economy, Detroit, for this Sunday’s Slammiversary pay-per-view. Christopher Daniels, who has been with the company since its early days in Tennessee, does not feel the area’s economy will hurt what can be amazing entertainment at a good value.

“You get great entertainment for your dollar,” Daniels told SLAM! Wrestling. “You can go out and enjoy yourself.”

TNA is having specials on tickets, including general admission seating as low as seven dollars. 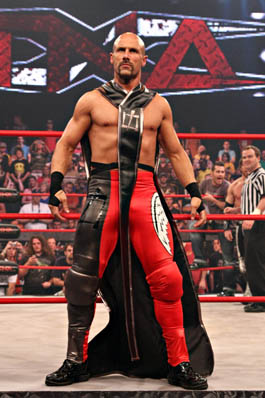 Slammiversary celebrates the seventh anniversary of TNA, a company that struggled financially for years until recently being able to be profitable. “We are reaping the benefits of us working together during the Asylum days in Memphis. We all have been on the road together. We failed together. We succeeded together. I consider these guys family.”

When asked if he took any personal pride in seeing the company build in a successful venture, Daniels (who has dropped Christopher from his name) did not want to compliment himself but noted it was “a team effort.”

Shane Douglas, who has been missing from wrestling for a couple of years, will be Daniels’ opponent this Sunday. When asked how the match will work with Douglas not being in the best of ring shape, Daniels said that “Shane’s greatest asset was his mind. He has more experience and broader mind than I do and this will be a different Daniels match that you normally see.”

Douglas and Raven were brought back to the company by TNA as part of celebrating the history of the company at Slammiversary. 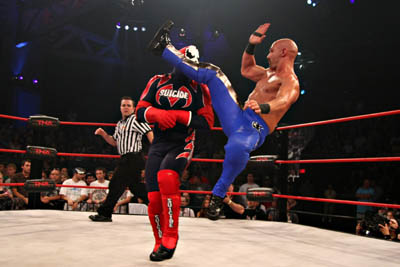 Daniels’ upcoming match with Douglas (who worked in the early days of the company as both a wrestler, manager and agent) brought back memories his history with TNA. His three-way match with Samoa Joe and A.J. Styles at TNA’s Unbreakable pay-per-view on September 11, 2005 was the one moment that stood out as his favorite. It is the only TNA match to be given the respected five-star rating from The Wrestling Observer.

“It was really a high point for the X-Division because it was the only time the X-Division Title was defended in a pay-per-view main event. And the division was able to shine.”

But Daniels thinks that the X-Division may reach that plateau again soon with guys like Amazing Red, Alex Shelley, Suicide and others leading the way.

Sunday’s event will be held at the Palace of Auburn Hills, about 30 minutes north of Detroit, which is the biggest arena TNA has ever run. Daniels is hopeful that TNA will use this as another building stone in the growth of the company.

“TNA is branching out and coming to a large arena is part of the progress of the company. A lot of this (branching out) can come with our house shows, which are really in their infancy. We are able to bring the fans longer matches and make a more personal connection with them.”

If TNA wishes to grow, they can use the experience at this Sunday’s event to learn about “branching out” and trying things they have never done before. Tickets are still available and can be purchased at Ticketmaster outlets or check TNAWrestling.com for more information.