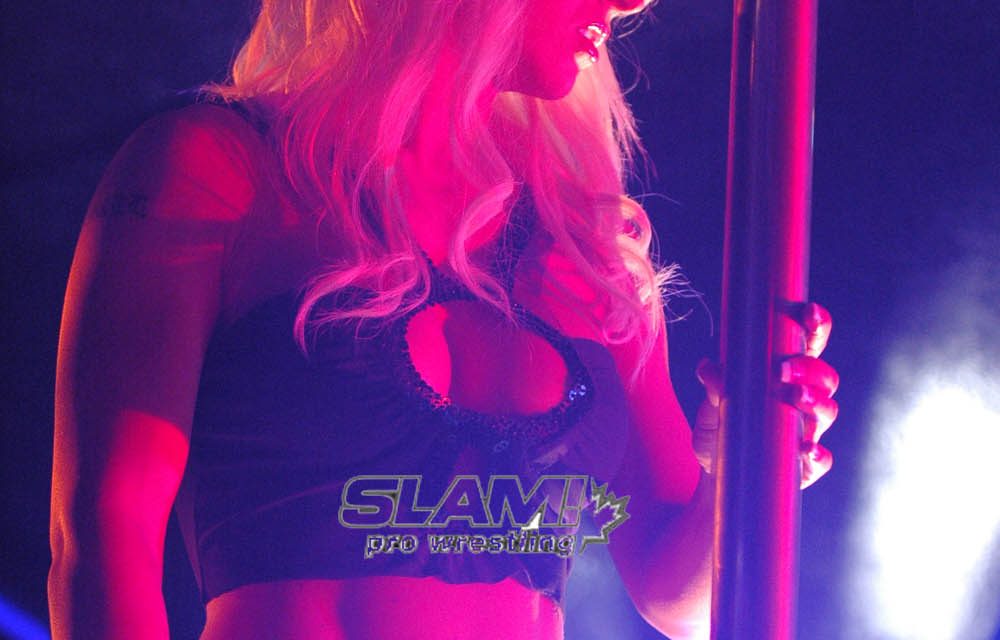 When a film stars country music star LeAnn Rimes, Beverly Hills 90210 icon Luke Perry, Elaine Hendrix from Parent Trap, and Jon Gries from the modern cult classic Napoleon Dynamite, one would assume that the ensemble cast would be perfect and complete. Not quite. The icing on the cake is none other than current TNA Knockout Champion, and proud Canadian, Angelina Love. Good Intentions, a comedic independent film set in small town America, promises to be a pop culture fan’s dream.

Yet the film’s premise also promises to be a touching one, about a frustrated mother, Etta, played by Hendrix, who has to go to extremes to provide for her children. Luke Perry plays Chester, Etta’s husband, and his desire to be an inventor consistently wastes all of their money on gadgets and gizmos. Etta must take matters in to her own hands if she wants her children to go to college. Inspired by stories on the Antiques Roadshow, Etta decides to invest in antiques and sell them off later to pay for college. Now all she needs is seed money for her new venture — and viewers will never believe where she gets it.

SLAM! Wrestling spoke with director Jim Issa, and producers Pamela Peacock and Richard Sampson, all based in Atlanta.

During a recession where many people can not afford to eat these days, the power of Good Intentions will be felt by many, according to Peacock: “It is going to tap into that core group of audience members who struggle to pay their bills, or who can’t raise money to buy a new house, or wonder if they will have the money to buy their child a new bike.”

Rather than preach at the audience, the director praises the script for being a “socially conscious comedy” rather than one without a message. Issa feels that the film can be viewed from a variety of perspectives, and he cites celebrated auteur Wes Anderson as his biggest influence as a director, especially when filming this touching comedy. “I love Wes Anderson. There’s something about the simplicity of his movies. Bottle Rocket and Rushmore are my favorites of his,” Issa says. “Those movies are really great to me because they can be viewed from a variety of perspectives. On one hand, they’re funny, but if you step to view it from another perspective, they are also very touching and offer poignant social commentaries. Good Intentions fits into that same type of filmmaking.”

Like most independent movies, getting this independent movie funded and produced was not easy, but the task was much simpler with the famous ensemble cast of Good Intentions. Actress Elaine Hendrix, most famous for starring in Disney’s ’90s version of The Parent Trap, was the first major name attached to the film.

Country diva LeAnn Rimes was the major superstar who signed onto the project next, which was a major coup. Producer Richard Sampson explains, “At first, we were told that Rimes loved the script, but was not available. So we called up her manager, and talked about the production schedule. Turns out her tour schedule had two strategic openings in it we moved a couple of things around and were able to get LeAnn on board.”

Rimes was so impressed with the script and with everyone involved, that she agreed to the use of two of her songs from her album Family in the film, including her Grammy-nominated song, Nothing Better to Do. It is almost unprecedented that this totally independent film already has a Grammy-nominated soundtrack, even before its release.

Issa remembers numerous women wanting the autographs of male lead, Luke Perry, who joined the film’s cast soon thereafter. Perry was not cast just because of his 90210 acclaim; rather, it was because of his personal relationship with the script. “Luke told me he grew up in a trailer park in Ohio, and he lived this redneck lifestyle back then. He knew how this class of people relate to one another,” Issa says. “There is one scene where Luke walks into the family dining room with a hat on, and he puts it on the chair. We told him to put it on the table and he said, ‘No, my Momma always told me to put my hat on a chair.'” Perry’s working class upbringing helped bring many more authentic touches to not only his character, but the film in general.

Perry also helped garner attention from halfway across the globe: from a Japanese MTV-like channel. “Luke Perry is huge in Japan!” Issa exclaims. The Japanese TV crew all but ignored everyone else, but followed Perry around like he was a deity — or perhaps one of The Beautiful People.

When one of the female roles called for acting in a skimpy outfit, but with some serious degree of physical work involved, Sampson immediately thought about getting a female wrestler, who he felt would be able to both act, and take a fall or whatever was thrown her way. “WCW was based out of Atlanta, so we called some people who used to be associated with it, and they were able to track down a wrestling promoter,” Sampson says, and they referred him to some female wrestlers who might be interested. “When we first saw Angel’s photos we thought she was great. Then when we met her and found out what a professional she is, we were thrilled.”

A number of female wrestlers were suggested, and Love was the first person they screen tested for the role, by chance. Both of the producers and the director were entranced by her charisma. “We met her and we felt ‘this is it,'” Peacock adds, and immediately offered Love the role.

Her role in the film, although a limited supporting one, is central to film. As Peacock puts it, “Her role is very memorable. What she does makes such an enormous impact. At all the test screenings, her scenes got a tremendous reaction from the audience.”

While some directors may look down at wrestling, director Issa is a fan of wrestling, and recognizes them as the ultimate combination of “extreme sports athletes and performers.” Although his favorite modern wrestler is current TNA World Heavyweight Champion, Mick Foley, Issa watched wrestling regularly with his father from as young an age as he can remember, while growing up in the kayfabe town of Jake “The Snake” Roberts and “Crusher” Jerry Blackwell, Stone Mountain, Georgia.

Issa fondly recalls “as a little kid, in fourth grade, I went to a wrestling event at the Omni, with my father, and there was one match where when someone was thrown out of the ring, everyone in the front row would be able to beat that wrestler with a belt. I remember I was so into it, that I ran up to the front row to try and beat that villain with a belt!”

Today, Issa laments the current state of professional wrestling, which he feels lacks the raw edge wrestling had in his youth. “Now it’s all overly produced and soap opera-y, with big lights,” he says with some sadness in his voice. “But back when I watched it — the glory days of Ric Flair, Abdullah the Butcher, The Anderson Brothers, and Stan ‘The Man’ Hansen— it was all about the characters.”

Speaking of interesting characters, Love’s role promises to be that, and that’s an understatement. “There’s a very interesting interaction between Luke Perry’s character and Angelina Love’s character,” Peacock divulges, while giggling. “She gets him into a little trouble.”

With a strong female lead, Good Intentions bucks the trend of Hollywood films led by macho male heroes with silly names like Wolverine. But according to Sampson, the real heroes of the world are women, as portrayed by Elaine Hendrix. “The extremes that a Mom will go to provide for her children,” is what this film will depict, he says, and she will not let the economic crisis of the day get in the way.

Peacock mentions that, as a woman, she was there to ensure that the women in this film are portrayed in a fair and balanced light. “In my lifetime, I have seen a transformation in the world of entertainment and the world of business in terms of how women are treated,” she asserts, “and it was important to me that the actresses [in this film] came across as strong, confident, and authentic people.”

Peacock goes on to say that Love is a strong person in real life, and that it showed on the set. “Angelina is a very intelligent person, who just happens to be beautiful and can do a lot of physical acting,” Peacock says with high praise. It pleases her that TNA has given Love a role where she can talk and reveal to the world that she is just as articulate as the male wrestlers, if not more so. Peacock further says that everyone from Good Intentions was happy to hear that Love became the TNA Knockout Champion, and that “everyone from the film congratulates Angelina on her great achievement.”

ANGELINA LOVE: “THE NEXT MILLA JOVOVICH”

Good Intentions has much momentum going for it prior to its release. Unlike most independent films these days, it was all shot in 35mm, complete with dolly shots and state-of-the-art lighting. “It has a big Hollywood look to it,” director Issa says with pride, saying the producers spared no expense on the look of the film.

Shadowlight Pictures, which Sampson and Peacock own and run said, that “Good Intentions will be just the first of many such high-quality, yet intelligent films that we produce.” While their other films may be completely different from their first one, there is at least one aspect of Good Intentions that they would like to retain for future projects: Angelina Love.

“We didn’t tap all of her abilities,” Sampson admits. “We hope to work with her again. She was so enthusiastic, and so professional.” He says that Love has a bright future ahead of her as an actress. “She could be the next Milla Jovovich!”

Both Peacock and Issa concur. “She could be a star in a Kill Bill type action movie,” Issa predicts.

Long ignored by mainstream film producers, it is a high compliment for a female wrestler to receive unqualified praise from these professionals. Having spoken with all three of them, it is no surprise that they have recognized the talent of an underdog, as they, themselves, are proud of their working class roots. Good Intentions is a labor of love for these southern U.S.-based artists since they can present someone from the working class as a heroine, especially during the worst economic downturn since The Great Depression. Speaking with them, one is reminded of Harper Lee or William Faulkner, in their combining of their art with social justice. As director Issa so powerfully said at the conclusion of our interview,

“I live in a neighborhood where everyone knows each other, and we know when someone has lost their job. Atlanta is a tight community. And we reach out to those we know who have lost their jobs. But not every community is like ours. In many places, people are forced to fend for themselves. You have this survival nature now, and this is not good for the long run of a family or a community. The will of one is not as strong as the strength of the community, and our film hopes to point that out.”