AMSTERDAM, NY — The Professional Wrestling Hall of Fame is considered by some as the only legitimate hall of fame in pro wrestling today, because it’s the only one where wrestlers must receive votes to be inducted. It currently houses a who’s who of wrestling greats from Bruno Sammartino to Hulk Hogan to Bret Hart to Roddy Piper. And on Saturday night, a new “Wonderful” class was added to that elite list.

There was some disappointment when top names such as Randy Savage, Superstar Billy Graham and Capt. Lou Albano did not show up, but the hall of famers who did certainly made this a memorable night for their fans at the packed Perthshire Banquet Hall in Amsterdam, NY.

With the absence of headliners Savage and Graham, Paul Orndorff headed up the class this year and came to return the respect that all of his fans have shown him through the years. 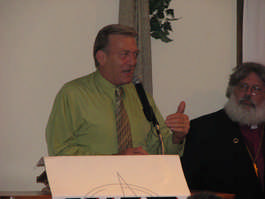 Paul Orndorff addresses the crowd at the induction banquet. Photo by Greg Oliver

“To see the era of old school guys and to see all the people and know that I’m going to be a part of this is so special,” Orndorff said.

Orndorff is also a member of the WWE Hall of Fame class of 2005, but sees no comparison between the two.

“In this one, you’re voted in by your peers. It’s the same kind of hall of fame induction as the NFL and Major League Baseball,” Orndorff said. “With the WWE, Vince [McMahon] owns that, so he can put in whoever the heck he wants.”

Mae Young also belongs to the WWE Hall of Fame and she trained fellow hall of famer The Fabulous Moolah, who she says had all the help she ever needed in her career from the woman that Young inducted into this hall of fame, Donna Christantello.

“She always took a backseat to everybody,” Young joked, implying how helpful Christantello was. “She was Lil’s (Moolah’s) right-hand person.”

Christantello accepted the induction with honour and called it one of her biggest accomplishments, which is the feeling shared by most inductees.

“This is the first real hall of fame, and you get to see all the wrestlers and learn about who they were and I think it’s wonderful,” Christantello said. “This is one of the greatest things to happen in my career in wrestling. I would do it all over again.”

Christantello has certainly done her part to make sure that women had a future in the wrestling business. She existed in an era where the word “diva” didn’t exist and without women like Christantello blazing a trail, there might not have been any female wrestlers in today’s business.

“We’ve kind of paved the road for these younger girls,” she said. “But they are doing a great job in the entertainment business. And one day, they’ll be here (in the hall of fame).”

This year’s hall of fame is also very special, because it extends to Hollywood as well with the induction of wrestler-turned actor Hank Garrett. Garrett started his speech off with comedy, but ended it with passion.

“The greatest time in my life was when I wrestled professionally, before I became an actor,” Garrett said.

Jimmy “Superfly” Snuka was also in attendance and who belongs to the WWE’s hall of fame. He was chosen to induct a man who he became very close with in his WWE career, but unfortunately, Capt. Lou Albano was ill and unable to attend.

“He was great. He was an awesome man,” Snuka said of Albano.

Posthumous awards went to pioneers Evan “Strangler” Lewis and Wladek Zbyszko. Mark Lewin and Don Curtis went in as a tag team, introduced by The Destroyer Dick Beyer, who wrestled Curtis (Don Beitleman) in college, and accepted by Curtis’ widow Dotty. Lewin sent in his regrets, and vowed to show up in 2010. Antonio Inoki was inducted into the International category of the PWHF.

There were several notables in attendance that night who would not miss the event for the world. One of them is one of the greatest wrestlers in the history of the business, Nick Bockwinkel.

“These guys are telling you and sharing with you a huge part of their lives and they’ve sacrificed a lot. Some of them are hobbling around here because their bodies have been beaten up over the years and people come because they realize the price that everybody’s paid to get here and all the fans have come to pay their respect,” Bockwinkel said. “When this started, it had no specific attachment to the WWE or the AWA or the WWWF or the NWA. It just recognizes everyone.”

The last induction of the evening was given by a man who is most recognized for managing perhaps the greatest faction in the history of wrestling, the Four Horsemen. Because of that, J.J. Dillon has always had the gift of gab and it showed at the hall of fame ceremony, where he had to induct a man who he only knew in the latter stages of both men’s careers. That man is “Mr. Wonderful” Paul Orndorff.

“I got to know him (Orndorff) best in WCW when Paul taught at the Power Plant,” Dillon said. “He was everything I had ever heard he was. He was a man’s man.”

Orndorff is one of four guys that can say he’s wrestled in the main event of Wrestlemania 1, which is what he’s most recognized for. But as far as this hall of fame goes, he is thrilled to be a part of it. He did express concern however that the era of wrestling traditionalists has come to an end and sooner or later, there might not be a hall of fame.

“When you think about it, this is it,” he said. “After this it’s over, because the wrestlers nowadays are not worthy, quite frankly, to be in the hall of fame. I’m just happy to be a part of it and this is definitely a highlight of my career and everything that could have happened has happened and I thank God for that.”

Plenty of snapshots and autographs later, the hall of famers returned to their hotels and have started looking forward to next year’s inductions.