Mauler a monster with purpose and drive

He may not be a werewolf, vampire or other mythical creature of the night, but it should be noted that the sun has typically set by the time Stuart Brown has made his remarkable transformation from contractor to monster.

“I do have a day job. I have my own contract service company. I service products in northern B.C. for other companies, companies that can’t hire their own employees as there is not enough hours to keep anyone hired,” according to the 31-year-old Prince George, B.C. native, who usually has four people working for him. “It is also great for me as when I need to get away, I spread out the workload or hire someone else to fill in while I am gone.” 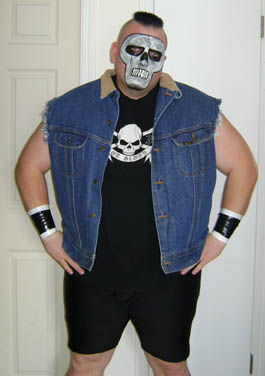 Where he goes is on the road to wrestle on the Canadian pro indy circuit as the six-foot-one, 324-pound brawling super heavyweight, “The Mauler.” Brown’s alter ego was a choice not a curse, and one whose origins date back to his childhood days watching WWF Superstars of Wrestling and Saturday Night’s Main Event. He took his first steps toward becoming a wrestler himself in 1997 when he attended a tryout for Extreme Canadian Championship Wrestling.

“I did the one class and was hooked. Unfortunately I was not able to stay in Vancouver and had to go back to Prince George — life called.”

Brown took a shot at an apprenticeship in bodywork, but finding the trade unsuitable, he did what he could to get laid off so he could again pursue wrestling. This time, he would avoid wrestling schools and instead travel with various promotions, setting up rings, and eventually getting some training from anyone who was willing to show him the ropes.

“I learned a lot from Michelle Starr, Steve Wilde, and Phil Lafon in the early part of my career. Later on I learned from Vance Nevada and Kerry Brown,” he said.

In December 2000, Brown made the bold move of starting up his own wrestling promotion, Maniac Wrestling Alliance (MWA). He ran shows in Prince George and northern B.C., learning about promoting on the fly, while practicing and honing his skills as a wrestler.

“I had no starting capital. I had a partner that stole a couple grand right from the start. Needless to say he is no longer with me and he never really did anything with wrestling after that. I had no experience, no guidance, nothing to start. It was a lot of hard work and a lot of trial and error; there was a lot of error,” Brown said. “I had a bunch of guys that had no drive and all turned out to be losers. Once all of them were gone and I started bringing in talent from other places, things were better and the shows were way better.”

Nevada, a 16-year veteran and mentor to many in the indy leagues, agreed that Brown’s promotion has taken a great many strides, and pointed out that even indy wrestler Davey Richards of Ring of Honor fame has wrestled there.

“When the MWA opened, a lot of guys in the business gave it a ‘backyard’ label, specifically because there weren’t any experienced talents involved with it. However, over time, as Stuart took advantage of the opportunities to train with and wrestle against more experienced guys, and recruited rosters of talent from other circuits, he has created a great little company that I love to work for,” Nevada said.

Chris Hennigar, who wrestles as “Old School” Chris Wayne, called Brown a friend and said he was one of the friendliest, funniest guys he has met in the business.

“I cannot say enough good things about the Mauler. I have known him since 2000 and have had the pleasure of stepping into the ring with him on numerous occasions,” said Hennigar. “The one thing with him is that whatever needs to be done to get the match over he will do and has no problem doing. Each time we have wrestled we have always done something a little different than the last time. I know that when I wrestle the Mauler, we are both going to be a little beat up and wouldn’t have it any other way.”

In the last few years, Brown has put on fewer of his own shows and has worked for other promotions in and out of his province. He said he is not only too busy on the road to do much promoting any more, but that the Prince George Boxing and Wrestling Commission’s fees and demand for expensive blood work from the wrestlers every three months makes it uneconomical to do much business.

A not-so-monstrous Stuart Brown snoozes with his son.

One of the most taxing circuits Brown appeared on was Tony Condello’s Northern Death tour.

“The first tour I did was hell but it was also my fault. I knew that the tours were nowhere near as hard as they were years ago. I wanted this trip to be as hard as possible so I could challenge myself. I did as much driving as I could once we were there. Hours behind the wheel while everyone else sleeps is hard. I also got very sick my first time out so when I did get rest it was not good rest at all. I was normally the first one up as well. I had an alarm clock and it was my duty to make sure I started waking people up.”

Brown can now say he has appeared across Canada, for he is currently wrestling for the first time in Eastern Canada, appearing on MainStream Wrestling Entertainment’s April 24 to May 28 tour of Nova Scotia, New Brunswick, and Labrador and Newfoundland.

“I know that (they) normally run twice a year and I was getting ready to send my info to try to get booked on the September tour. I heard that there was a cancellation so I sent out my picture and info right away. Within a few hours I got an e-mail back saying that (they) would love to have me in,” said Brown, who added the experience there so far has been great.

“I knew of the Mauler through his running of his own promotion Maniac Wrestling Alliance for many years,” said MSW promoter Devin Chittick. “He will be on all 20 shows of this tour, the largest tour in the country.” 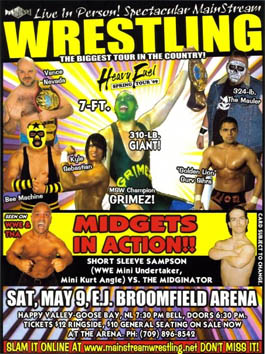 Nevada, who will also appear on the East Coast shows, lauded Brown’s accomplishments and called him one of the most genuine people he has ever met in the business, and someone his household regards as family.

“When I first met Mauler in 2003, he hadn’t worked with too many talents that could validate his skill inside the ring. But I think you only have to look at some of the tours that he has been on, or the matches that he has been signed for, to recognize his professional growth over the past year,” Nevada said. “I would say that he’s easily the most underrated talent in Canadian wrestling today.”

Brown admitted that at 23, he started late by today’s standards, but he still expressed a strong desire to get ahead, and continue seeing as many new people and places as he can.

“I would love to see myself go further… At 31 now, it will probably be an uphill battle to get further but I am willing to fight. I have goals in wrestling and one of them is to wrestle on two other continents. I am currently doing some research on wrestling in other places of the world. I would love to get on some tours elsewhere.”