Mark Gentleman’s Choice: The Chris Adams Story at or near the top of your list of films to catch if the life stories of complex characters move you, if you are a wrestling fan with a thirst for an insider’s knowledge of the business, or someone seeking or enjoying stardom in the wonderfully weird world of professional wrestling.

This is the story of “Gentleman” Chris Adams, the English architect and judoka who would achieve fame and fortune in America as a professional wrestler, but later became a tragic figure as he fell under the lures and trappings that notoriety offered. 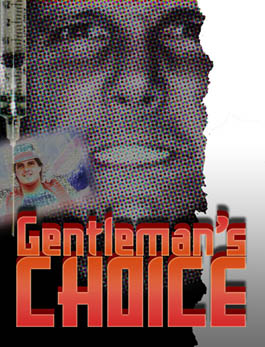 Adams enjoyed massive success with Dallas-based World Class Championship Wrestling (WCCW) in the 1980s, but his Jekyll and Hyde personality would eventually do him in. When sober, Adams lived up to his polished, refined man’s handle, but when under the influence of alcohol and/or narcotics, he could become a monster. He saw jail time for headbutting a co-pilot when a stewardess refused to serve him any more booze during a flight from Puerto Rico, was arrested and convicted for driving under the influence, as well as assaulting his second wife Toni. Near the end of his life, Adams faced manslaughter charges for his involvement in the death of his girlfriend Linda Kaphengst, who overdosed on GHB. He never saw trial, for his best friend shot and killed him one night after Adams attacked him in a drunken fit of rage. Adams died at 46 in October 2001.

Many of those interviewed paint Adams as someone who could be a nice guy, but at times, also a manipulator. Later in his career, Adams began promoting his own shows, and is said to have occasionally stiffed his wrestlers. He also started his own wrestling school and had the distinction of breaking in a young Steve Austin. But anyone who read The Stone Cold Truth would know Austin never had much love for Adams, calling him a “con man deluxe” and “a pile of crap,” as he explained Adams took advantage of him and other wrestlers-in-training by taking their money and ill-preparing them for ring action.

This 97-minute documentary is amazingly well-researched and provides a thorough telling of Adams’ rise and downfall. Insiders interviewed include his parents, brother, ex-wives, friends, colleagues, and a positively bizarre menagerie of characters and former hangers-on, including an ex-stripper friend of Adams who clearly shows the signs of years of drug abuse. Even Adams’ killer is interviewed. The separate interviews are spliced together extremely well, which creates a very smooth transition; it is almost like watching a video version of a research paper, in that, one is clearly shown, step by step, a thesis being proved with multiple sources. The amount of testimony also helps shed light where none existed previously.

Mickey Grant is by far the main force behind the making of the film. With a budget of $300,000, he took five years to shoot, direct, produce, and edit the project. (He worked on other documentaries during this time as well.) He has credentials in both wrestling — he was a major force behind the scenes in WCCW — and documentaries, having completed a Masters film degree at the University of North Texas, and having worked on documental films for the past 25 years. But despite his expertise, Grant said that mainstream distributors’ bias against wrestling made the Chris Adams story a hard one to sell.

“Usually my films sell to HBO or other broadcasters first. I took this film to the European Film Market in Berlin and to MIPDOC at Cannes. Major buyers who had bought my previous films wouldn’t even view Gentleman’s Choice because it dealt with wrestling. I was amazed,” Grant said.

His repeated explanations to buyers that wrestling was the background of the film, and that the foreground was a tragic and dramatic personal story, fell on deaf ears.

“Mainstream broadcast buyers hate wrestling. They don’t know anything about it. They believe only idiots watch it. Obviously, I totally disagree,” Grant said, explaining that a study he conducted while taking his college courses flew in the face of buyers’ notions. “I did a statistical study with a survey to 300 attendees at one of our WCCW shows at Reunion arena. The TV wrestling audience is mid-level to upper mid-level income, and has a larger percentage of college grads than most network TV series.”

He compared the limited distribution of the surprise hit The Wrestler to how buyers received his own film.

“In most major cities it only played on one screen. They had the same problem in terms of Hollywood thinking that it was ‘a wrestling film.’ So much for a Golden Globe winner. It did do better in Europe.”

Grant has decided to circumvent the anti-wrestling establishment by taking his work to the World Wide Web, releasing it on the Eyesoda.com indy film website.

“I believe in the power of the Internet. ‘View Per Demand’ is just taking off on the ‘Net. I think it will be very big before the end of the year,” he said.

The film alone is worth one’s time and certainly the $5 it costs to view it online, (one can also buy the DVD version for $24.95, plus $5.95 for shipping and handling), but if you need more convincing, the extras are pretty appealing too. They include: One of Gary Hart’s last interviews, in which he discusses the roles steroids, human growth hormone, GHB, and pain medication have played in the deaths of Adams and many other wrestlers over the last 10 years; and the October 1985 hair-versus-hair match Adams and Gino Hernandez had against Kerry and Kevin Von Erich (see: The Von Erichs: A Family Album) at the Cotton Bowl Stadium.