The Wrestler tells the story of a past his prime grappler who is still trying to figure out what to do with his life. The story hits home for many wrestlers, finding it hard to adapt to life after being in the spotlight, with many not being able to.

Yet on the flipside, if there was a guideline for what to do, Art Crews might be the star. Having wrestled all over the world, Crews’ finest accomplishment was after he stepped out of the ring. Crews, a journeyman wrestler from a small town in Kansas, is now the head warden of the Coastal Bend Detention Center is Robstown, Texas, putting him in charge of 2,500 convicts. 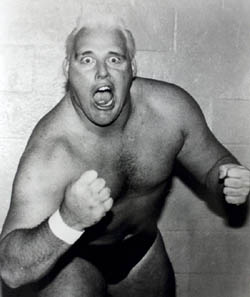 In 1980, Crews fought Billy Howard in his debut, going to a time limit draw at the Kansas City Memorial Hall in Kansas City, Kansas. Crews would travel to numerous territories in his first year in the sport before making his first mark in the Pacific Northwest territory. Crews spoke highly of the promotion and the man who ran it, Don Owen.

“Owen was a great payoff guy,” Crews told SLAM! Wrestling. “It was a great place to work and sharpen my skills.”

Nicknamed the “Blonde Bomber,” Crews was awarded “Rookie of the Year” honors in the Pacific Northwest. It was there that Crews would often pair up with, both in tag and against, Buddy Rose, Matt Borne and Roddy Piper. It was during this time that Piper gave Crews some advice.

“He said if I wanted to have a family, the wrestling business wasn’t for you.” Crews went back to what Piper told him years later when Crews was ready to be start a family.

Crews would travel back to the Central States (Kansas City), along with working Mid-South, St. Louis and Memphis from 1982-1985. It was during this time that Crews worked Shawn Michaels’ first match. Michaels told the story in his autobiography, Heartbreak & Triumph, and Crews will go down as the first man to defeat the future Heartbreak Kid.

During his time in St Louis, he faced some of the best, including Ric Flair, Kerry Von Erich and Terry Funk. Crews was not impressed by Flair’s skills. “He was a good wrestler but I cannot say he was the best. I wrestled others whom I felt were much better.”

Under “Cowboy” Bill Watts’ watch in the Mid-South region, Crews was able to face the Road Warriors and Terry Taylor, but it was Watts who remembered Crews fondly. “If all the guys were like [Crews], I would have had very few problems throughout the years,” Watts wrote in his autobiography, The Cowboy and the Cross: The Bill Watts Story.

Through recommendation of guys like Dusty Rhodes, Stan Hansen and Bruiser Brody, Crews made multiple trips to Japan. There he often teamed with Terry Gordy, who would later become one of the most successful gaijins (foreigners) in Japan during the early 1990s. Crews was able to adapt to the stiffer, more physical style that Japanese wrestling offered. He had to, especially when he was faced against opponents like Jumbo Tsuruta and Genichiro Tenryu.

“I loved it over there. The food, the experience, the matches were great memories for me. It was a different style but it was something I could handle and that is maybe why I not only liked it but got great respect from the others there.”

Crews is often mentioned alongside “Diamond” Timothy Flowers. Flowers became Crews’ favorite tag team partner over the years. The two traveled the world together but made their largest mark in the Central States territory during the mid-1980s. The two were managed by Ken Johnson, who had about to undergo a name change to the “Doctor of Style” Slick. But the way Johnson left for the WWE rubbed Crews the wrong way.

“We [Johnson, Flowers and I] had agreed to send a tape to the WWE. Johnson went behind us and made his own deal. One day we came to wrestle and he was gone.”

Crews came off the road, working mostly near his home in the Portland territory, so he could start his family. He also began to take classes to become a correctional officer. He used his wrestling skills early to teach other officers take downs and other self-defense moves. Crews liked the idea of a full-time job, not having to travel and being able to spend more time with his family.

He continued to wrestle on occasion until 1989, when at the age of 30, retired from the ring.

“When I wrestled I only had to wrestle one guy, but as a ward, I now must rule over 2,500 criminals.” Ted DiBiase Sr. once told Crews he was “too nice” for wrestling but that’s one thing the prisoners cannot know about Crews.

“I learned a lot about diversity during my travels as a wrestler. I had to travel the word to experience that. I can experience a similar diversity inside the prison walls.”

On April 15th, 2009, in Las Vegas, Crews will be honored by the Cauliflower Alley Club. Crews has never attended a CAC event but looks forward to seeing old faces.

“People who worked with me know I busted by ass to get where I was in the business. They know where I got wasn’t given to me, and earned what I got,” he said.