WrestleMania 25 delivers some bang but ends with a whimper 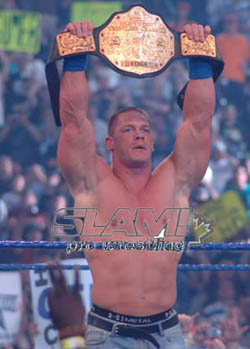 HOUSTON – An old showbiz cliché says that you should always leave them wanting more, but what happens when you leave them expecting more? That was the question hovering over a good percentage of the 72,744 people filing out of Reliant Stadium at the conclusion of WrestleMania 25 on Sunday night.

A bigger question going into the WWE’s marquee event was whether or not downplaying the Hollywood glitz usually associated with WrestleMania was a winning strategy. The history of stars from the world of entertainment and sports playing big roles at the pay-per-view got its start at the very first event, and it was still evident within the past two years thanks to the likes of Donald Trump and boxer Floyd Mayweather Jr.

The 25th anniversary show wasn’t celebrity-free, but their presence was minimal and hardly drove the show. Fans popped when Mickey Rourke sent Chris Jericho to the canvas with one punch, but they seemed mostly unimpressed when Kid Rock performed a medley of his songs earlier in the night.

Instead, the WWE attempted to make its followers care about a series of feuds focusing on personal issues between its top stars. The results were mixed, but the ones that worked went over in noticeable fashion.

There were cheers as Jeff Hardy attempted to pay back his brother Matt for his betrayal in a match with no rules. There were plenty of laughs as Santino Marella won the Diva Battle Royal to realize his dream of becoming Miss WrestleMania.

And there was no question that the crowd was extremely enthusiastic about the highlight of the night, the match between Shawn Michaels and the Undertaker. Built up by a series of great promos and skits that saw Michaels stay one step ahead of his foe, people appreciated every bit of hard work delivered by both men and popped big when Undertaker added another win to his undefeated WrestleMania record.

The problem was that the Michaels-Undertaker bout was so good that it set the bar too high for everything that followed. The emotional peak of WrestleMania 25 arrived with two title matches and about 80 minutes still to go.

The championship fights had storylines attached to them too, but they didn’t pay off in nearly the same way. A three-way match between Edge, Big Show and John Cena didn’t seem to resolve the often goofy love triangle tale that supported it, and Cena received his now-common mixed reaction when he walked away with the gold.

Stranger still was the main event that pitted Randy Orton against Triple H. Ostensibly for Triple H’s WWE Championship, it revolved even more around a long-running grudge and a series of attacks that struck close to home.

With the stage set for any number of scenarios, the WWE played it surprisingly safe. The resulting match was solid and had its share of drama, but the lack of outside interference or plot twists of any kind failed to spark the same feeling of energy Reliant Stadium had in it a few hours before.

It was almost a “That’s it?” reaction that first came to mind. Fans headed home happy but slightly unfulfilled.

“Undertaker-Michaels should have been the main,” said one man headed for the Green Lot, echoing other similar sentiments heard in the buzzing among his fellow fans.

Unable to end on a high note and devoid of some of its usual pop culture glamour, Sunday night’s show rated excellent as a pay-per-view but somewhat lower as a WrestleMania experience. The WWE has tweaked the formula for its biggest night many times over the last 25 years, and more are almost certainly in store before it arrives in Arizona next March.