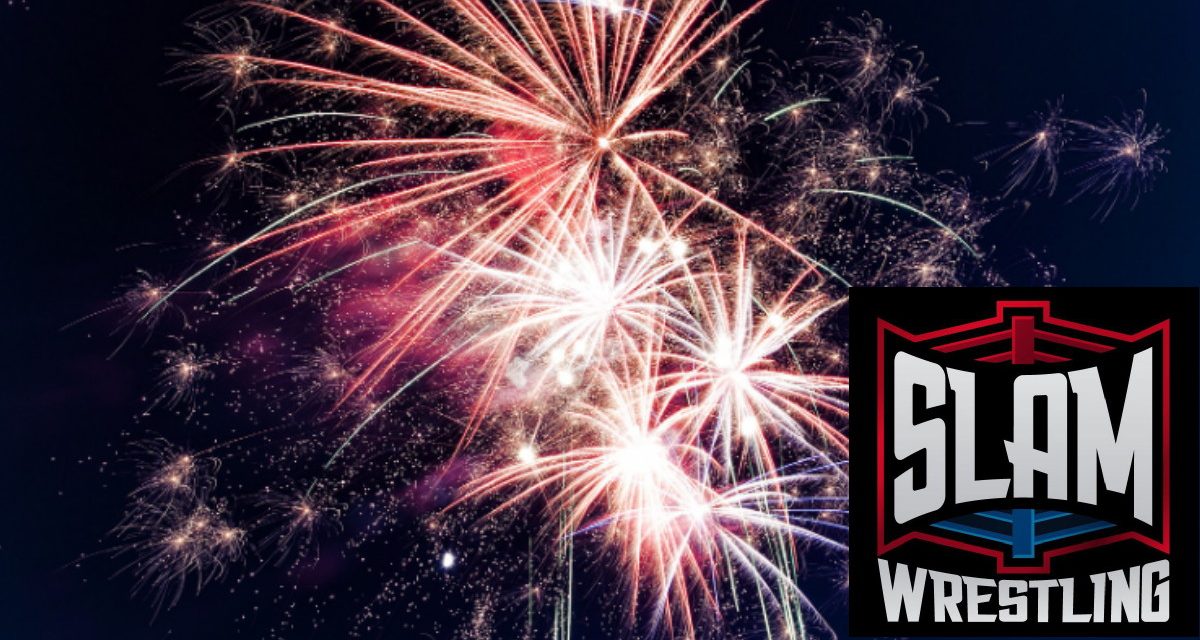 For many of us, it’s finally time to sit back and savor the holidays and professional wrestlers are no different. Working schedules that bring them right to the threshold of Christmas Day, SLAM! Wrestling asked several wrestling and entertainment personalities to share their holiday plans and New Year’s resolutions. It was clear from the varied responses that many were looking ahead to spending some quality time with family while reaching for the stars in 2009. 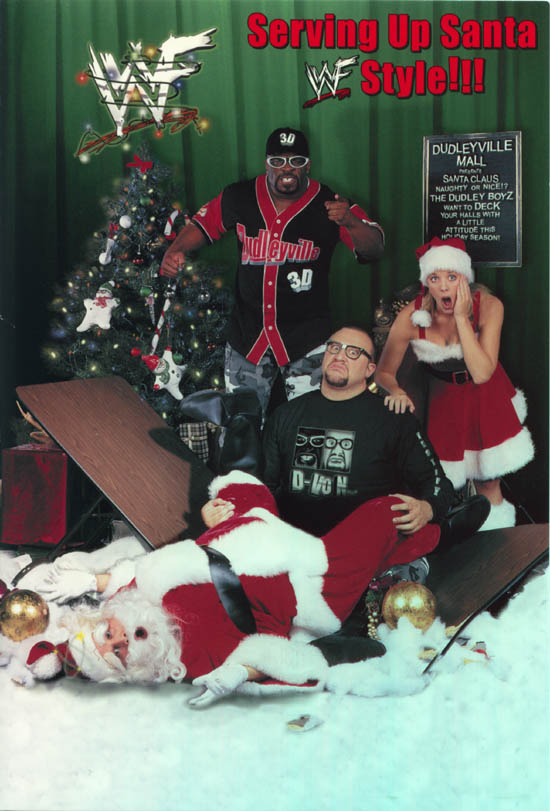 It’s a bit dated now, but here’s a blast from WWF’s past — A Dudley Boyz-themed Christmas card.

Well, let’s see. We have to get done on the 22nd, so I’m going to be at my Mom’s. This will actually be my first Christmas that I don’t spend in Canada. It’s going to be weird. She’s going to fly down to Florida. We have all the dogs in Florida, because our dogs up here [in Toronto] passed away. We have everybody down there, the dogs, my girlfriend, my mom and I. We going to have as many people over like I think we’re going to have the Kozlovs of the world, whose family’s in Russia, we’re going to have them hopefully over for dinner. Whoever doesn’t have a place to go to for dinner, they’re coming over. 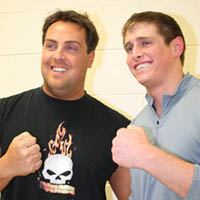 Spend time with my family. Probably train in Charlotte a little, or as much as I can. My brother and I are wrestling in Bluefield, West Virginia, I think, on December 20. It’s kind of up in the air; I haven’t got the final details on it yet. As far as that, I’ll be in Charlotte.

Pretty much just spending time with family and friends. No vacations or anything, just probably going to catch up with some friends I haven’t seen in a while, who’ve been at school and just relax, train hard, eat some good food. I’m a big sushi guy, but probably won’t be eating much of that at Christmas. I eat everything pretty much, not really picky.

I have to wrestle on the 23rd, that’s my last date of the year. I will be going to the Houston area to wrestle for Booker T’s promotion, PWA. So I kind of feel that Christmas starts then because I’ll be seeing some of my fellow wrestlers, and I’ll have a lot of fun there. But then after that, once I get home the next day, Christmas Eve, it’s just relax, chill out, spend time with family, eat a lot of turkey. It’s going to be as normal of a Christmas as possible for a guy who makes a living dressed as a shark. 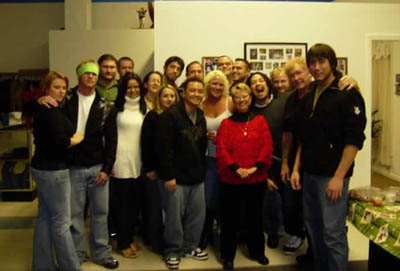 Harley Race poses with his students.

Our last show was the 29th of November until we get into January as the majority of our events are sponsored by high schools and stuff like that. So we’re just kind of hanging out now until we get through the basketball season and then back ready to go again. 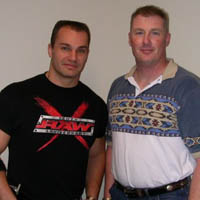 My wife and I are traveling to the wrestling capital of the planet, Calgary, Alberta, Canada, don’t you know. We’ll be spending Christmas Day at her parents and doing the gift exchange with all the relatives from her side of the family and then Boxing Day it will be off to do the same at my Mom’s house. It will be nice next year that we will be running monthly shows in Calgary so I’ll get to see family and friends more often.

As for New Year’s resolutions I want to be able to complete the Spartan 300 workout in 40 minutes by the end of the year. I am looking forward to working with more TNA talent so our locker room can benefit from the experience. Finally, I am looking forward to attending WrestleMania in Houston as well as the Hall of Fame inductions. 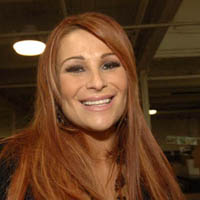 I think my New Year’s resolution for 2009 is to live my life more on the edge and to take a chance everyday and to step outside the box a little bit more and be more daring. More daring than I’ve ever been before. 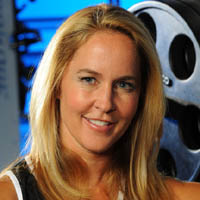 I’ll spend the holidays surrounded by my favorite people, my family. We do all the traditional things: decorate the tree together, sing Christmas carols & decorate a gingerbread house. We always spend Christmas at home, since I love seeing the kids come downstairs with all the presents under the tree on Christmas morning. Every year on Christmas Eve, everyone opens one present (Christmas jammies) and we leave cookies out for Santa and carrots for the reindeer. This year I’m hoping to find a pony under our tree (or in our yard).

My New Years resolution is the same as always: Give the gift of time. Volunteer! I’ve got six kids and a busy, crazy life and I volunteer every week at a therapeutic riding stable. It’s one of the most rewarding things I do. 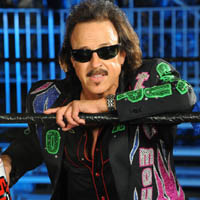 I just did a toy drive for Bubba the Love Sponge … and a charity event for Charlie Daniels, for his big thing at the Hard Rock Café. I’ve been very blessed. The WWE, Vince McMahon gave me the keys to the world and I’m just trying to give anything I can back.

New Year’s resolution? Just keep the dream of wrestling alive, for everybody. My birthday is January 1st, but no birthday party. I’m just happy to be alive, just going around, doing all the charities I can, and have fun doing it. 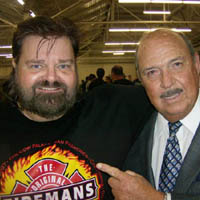 My holiday plans are simple! It will just be me and my dog, Pepper, spending a quiet Christmas here at my apartment.

My New Year’s resolutions are to lose some weight and to keep “Michael Porter’s WrestleShoot” interesting and entertaining, with even more, great guests. 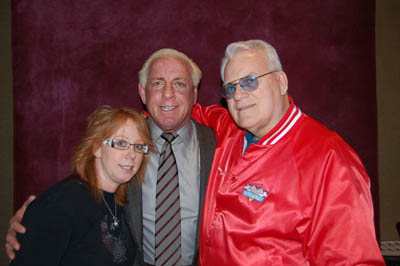 The end of the year is closing so fast for me. I am presently in the studio finishing up some new tracks. I’ll be doing the family thing here in New Brunswick on Christmas Eve, and North Brunswick, New Jersey Christmas Day. My grandmother will be 93 on January 7th, so she’ll be here with my mom, dad, brother and his family. I’m not sure if my sister will reach though. She lives in California.

My main goals for 2009 are to have several celebrity signings for charity. Kidney and cancer disease are the big ones this summer, and I’m working with JJ Dillon, Superstar Billy Graham and others on causes like Cerebral Palsy & Spinal Bifida. Personally, I’m working on a song that intuition tells me will win a Grammy. I know that sounds way out in left field, but I have a knack for predicting things before they happen, so I guess you heard it here first. 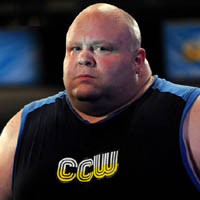 I will be spending Christmas with my family. This includes my wife Libby, my oldest son Brandon, 23, and his wife Brittany, who will be bringing my granddaughter. Brittany is expecting and it looks like February will be the time. Also my younger middle child, Caleb will be here. He is 20, and my daughter Grace, who is 15.

Yes, they are all ours. We’ll be here in Alabama. They are not going to like it here because they will be no sweets to sneak and eat. If I can’t have it, neither can they. I’m kind of good like that. Food will be good and healthy. Turkey, ham, chicken, dressing, mashed potatoes, corn. I can’t have all of it, but we have to have a good dinner.

I know this is going to sound crazy, but here is my food plan:

P.S. I dropped a couple of pant sizes already. I can eat turkey, but it has to be Butterball (laughs).

SLAM! Wrestling would like to take this time to wish you and yours a Merry Christmas, and a safe and Happy Holidays. A healthy and prosperous 2009 to us all..

— with files from Brian Elliot

Kenai would like to wish everyone a happy holiday season and a vibrant 2009.