Edge reveals the decadence behind his DVD

It seems like only yesterday when Adam Copeland burst upon the scene as Edge in the WWE. Yet it was 10 years ago. His career is celebrated in a just-released three-DVD set of his career, entitled Edge: A Decade of Decadence. He recently talked about why the package was difficult to put together. 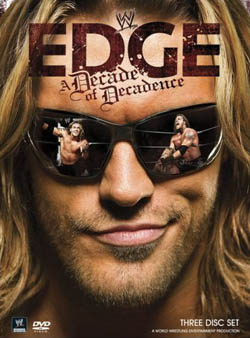 Two fundamental observations come to mind when one evaluates his career: His ability to roll with the punches, and his dare-to-be-different attitude. At his recent appearance at the Toronto Daily Bread Food Bank, Edge talked specifically to the Fight Network and SLAM! Wrestling about his involvement with the three-disc set.

And he was involved during most of the process in the rare release of a set of someone who has primarily been a heel.

Edge was hands on with the selection of extras and the commentary. A few of the matches come from his family’s personal library.

Edge intimated the matches that did make the cut should prove interesting for the fans. An example given was an early tussle between Edge and childhood friend Christian Cage, captured in good ol’ VHS format.

“That was a dark match that we did in Cornwall (Ontario). I had a contract at that point, Christian (Jason Reso) didn’t,” he explained. “I got a copy of it way back about 11 years ago and always had it. It was up at my mom’s this whole time. The same thing with the other extra with (Jeff) Jarrett from the SkyDome (where Edge wins the Intercontinental title for the first time, holding it just one night(. They’ve never been seen. So I thought, ‘These are great extras to put on there; matches that nobody has seen and hopefully kind of get a kick out of and be able to do commentary on and stuff.”

The commentary, which Edge and Matt Stryker handled, was also a blast.

“That was pretty fun for me, because I didn’t watch them (the matches) until we did the commentary. I said ‘I don’t want to see them beforehand. I want to do the commentary as I’m watching them for the first time in ten years or whatever.’

“Matt Stryker and I are good buddies so I thought it would be an extra little feel that people would get a kick out of.

“I cringed a few times (watching the matches),” he laughed. “I raised the roof (during a match at the SkyDome), like in the match with Christian,” he demonstrated. “I’m like, ‘Yeah, raise it!’ What am I doing, I’m raising the roof! And it was this awkward, stiff raising of the roof. A total Caucasian version, it was just ‘Ugh.’ A blond-haired metal guy raising the roof.”

The old-school flavour continues with rare matches of an up-and-coming Edge taking on mat legends Owen Hart and “Mr. Perfect” Curt Hennig. “It was neat to think back, ‘Wow! I wrestled Owen Hart.’ There’s not a lot of guys on this roster nowadays who can put a match with Owen Hart on there, who can put a match with Mr. Perfect on there. Those were two matches that I definitely wanted. The one with Mr. Perfect is like four minutes long, but for me, I grew up being such a huge Hennig fan and just getting a chance to go in there and do that with him, I had to put it on there. ”

He joked about his real early days in WCW, which are not on the DVD. “And if I had a tryout match it would have been good. I just went down there to get thrown around.”

Could it be too early though to release an Edge DVD? After all, Mr. Perfect had to wait awhile, and Owen Hart is still waiting.

“I’m ten years in, dude; how much longer do I have to go before I get a DVD?”