Donruss/Playoff Inc. created the Sports Legends version of the very popular Americana brand and this set dropped on December 12th; and if you look closely there’s a strong wrestling connection attached to this release.

One of the biggest names in this set is the Ultimate Warrior. He is one of the most recognizable names in the history of the squared circle and he hasn’t been included in a lot of these across the board sports set — until now. 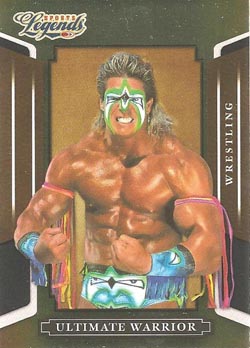 “Ultimate Warrior is as big as it gets and he had never signed autographs before,” said Donruss PR specialist Scott Prusha. “We did his first certified autographed card (Americana 1). His significance in professional wrestling ranks very high, I think he’s number three or four all-time.”

Now Scott has opened up a can of worms, and knowing this I got his list of the top four wrestlers of all-time.

Warrior appears in Sports Legends with a confirmed autograph (he signed in black on a mirror blue card).

As a member of Hogan’s Celebrity Championship Wrestling show Brutus “The Barber” Beefcake made the set. He signed cards with three different inscription variations, including “Wrestlemania”, “The Barber” and “Hulk’s Brother”.

“We had the opportunity to get him to sign some of those notations and they are pretty creative and adds to the value when it hits the market,” Prusha said. 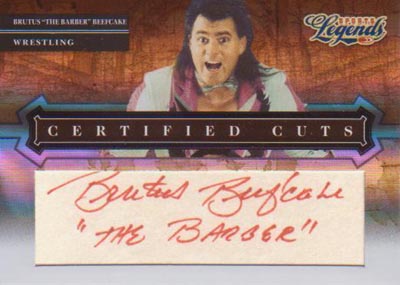 “We knew he was going to be working with Hogan on his show. [Dennis] Rodman is in the set as a Sports Legend and Todd Bridges signed for Americana II,” Prusha added talking about some of the wrestling associations that exist in recent Donruss sets.

Actor Scottie Schwartz, who is a world-class collector, has been lending a hand in the Americana series. He has a lot of contacts and he’s known for doing such movies as The Toy, and A Christmas Story.

Here are some other interesting names that will be included in this set knowing that there is a strong hockey/wrestling crossover: Patrick Roy, Brad Park, Pierre Pilote, Ray Bourque, Phil and Tony Esposito, Mike Bossy and Gerry Cheevers.

Needless to say this will be a set that will appeal to a wide group of collectors.

Russ Cohen, who helped pen the backs for Pacific Trading Cards’ TNA set, is based in New Jersey.