Armageddon anything but a downer in Buffalo 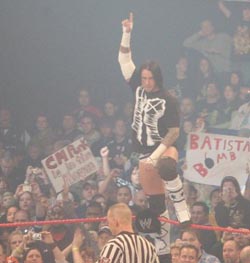 BUFFALO — Google Armageddon and you’ll get everything from an on-line countdown to the end of days, a synopsis of Michael Bay’s asteroid spectacle, and, amongst other things, a recognition that something special happened in Buffalo, New York on Sunday, December 14, 2008.

The last time that Buffalo’s HSBC arena hosted a WWE pay-per-view, being The Great American Bash of 2005, the WWE was still creating brand-specific pay-per-view cards, the fan reaction to the event was generally low-key, and the arena’s primary occupants, the Buffalo Sabres, were still trying to get their hands on a Stanley Cup. 2008’s version of Armageddon, however, clearly represented something more akin to a hopeful rebirth than an apocalyptic event, and proved that things do indeed change: the WWE has nixed the idea of halving their rosters for the monthly shows, the fans turned out in droves and made a lot of noise, and the Sabres … well, some things change.

As the pre-broadcast tag team match between Jesse & Festus and the new champs John Morrison and The Miz tried to fulfill its purpose of warming the crowd up for the start of the show, the majority of fans were still trickling in from the cold, rainy streets. The building looked sporadically filled and WWE staffers were busy shuffling people around to seats that would at least create the impression of a packed house for the cameras. However, by the time Lillian Garcia was belting out The Star Spangled Banner (and I mean belting, as Garcia hijacked the song about two-thirds of the way through to practise her vocalizing), the arena was jumping and any memory of the muted crowd reactions in 2005 were pushed aside by the boisterous attendants.

The most telling clue that showed how the fans had arrived to have fun was that they weren’t just there to cheer — they got their boos in just as heartily and very few people escaped the arena having been given an ambivalent reaction. It started with the introduction of the announcers, where the expected cheers rained down for Tazz, J.R. and Jerry Lawler, while poor Todd Grisham made his way to the announcer’s table surrounded by jeers (even more than Matt Striker received).

And although no group of fans is ever likely to top the Philadelphia denizens’ downright inhuman booing of Santa Claus, there are not many crowds that will be treated to a shot of players from their NFL team in the front row and greet them with a cascade of jeers and heckles as the Bills players were.

Buffalo and Philadelphia share the same kind of identity, though, of a working class town that will support you through the bad times if they respect you, but they will turn on you mercilessly if they feel you’ve let them down. So it was that the second-most boisterous reaction of the night came not during a match (the biggest reaction was during the flip-flopping near-falls and submission holds ending of the Cena/Jericho match), but while the WWE played on the headlines and progressed their storyline of Shawn Michaels’ financial woes. The WWE has never shied away from bringing in burning headline news into their world (just ask Sgt. Slaughter), and this escapade of HBK and his struggle to support his family is no different.

On the one hand, its tastefulness is questionable as it is extremely unlikely that HBK is facing anything like the financial straits that some of the very fans for whom he’s pleading his case are experiencing, but on the other hand, it pushed a button that got the crowd on its feet so why not use it? It was fascinating to watch the progression of floor-shaking cheers for Michaels as Sexy Boy announced his entrance, through to mocking chants and general disgust expressed by those same fans for Michaels’ decision to take a job. I only hope that these same fans line up outside Walmart and taunt those that come out wearing their new uniforms as they legitimately make ends meet. Still, the fans will be waiting for HBK after he wins the lottery, discovers he owns a Tim Horton rookie card, or whatever helps him get out of debt and lets him super-kick his boss.

As for getting the fans out of their seats towards the end of the evening, after the inclusion of the Buffalo Bills into the broadcast failed to generate what had to be the expected positive response, the WWE was able to fall back on another favourite Buffalo past-time: booing Toronto. When Edge’s music hit as the last entrant of the evening there was a solid mix of support and scorn for the WWE Champion. Interestingly, though, when he was officially announced as hailing from Toronto, whatever border-crossers were there to cheer Edge on were drowned out by a heavy downpour of boos. This was followed midway through the match by a heckle that only those living around a border town could possibly appreciate, as one fan yelled out to Edge: “Where’s your ketchup chips now?” — nothing shows disdain like the recognition of country-specific junk food marketing strategies.

All in all, the event gave the fans several reasons to get out of their seats as they appreciated the solid ending to the CM Punk/Rey Mysterio match, were highly entertained by The Great Khali’s festive edition of the Kiss Cam (though were heard to chant “boring” during the preceding eight-diva tag match; more on that in a moment), Cena’s mere appearance elicited the always entertaining mix of deep-voiced heckles and high-pitched screams of support, and the fans were in a mood to celebrate by the time Jeff Hardy’s historic win gave them all a reason to believe that an underdog always has a shot at winning it all, making him Buffalo’s favourite adopted son for at least one night.

Strangely, though, the seemingly obvious appearance of a certain Buffalonian never materialized, and the eight-diva tag match (continuing the WWE’s policy of supplanting quantity for quality in the women’s division) was deemed more important than giving Beth Phoenix a chance to walk into her home arena as Women’s Champion. Perhaps it wouldn’t have served the WWE’s best interests to have a crowd almost certain to cheer a certified villain, although they never seem to mind when Toronto crowds turn the expectations of treatments for heels and babyfaces on its ear. On a night when the crowd was given their money’s worth and gave the WWE their full engagement in return, it was a notable disappointment that the Bills were given a chance to represent the home city when The Glamazon would have likely proved to be a far better and more popular choice.