How great would it be to see a new version of a great stable like Evolution? What about a new group of Four Horseman? Maybe a new Dungeon of Doom! Too far? Yeah, you’re right. But those first two would be tremendous!

In TNA, Main Event Mafia runs rampant as the beleaguered Front Line does their best not to be buried by the New “NWO”. It almost seems like a new member is added each week to one or the other. How many more people are going to join each side? Could their problems be solved by a huge game of Red Rover? What about auxiliary members and support members? Do they get super-nifty MEM and Front Line decoder rings and jackets too? 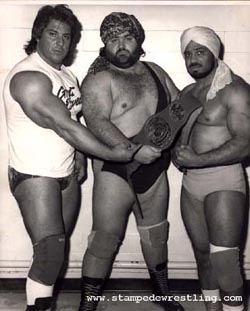 One variation of Karachi Vice: Steve DiSalvo, Makhan Singh and the Great Gama.

Then you have the teasing of the third generation stable in WWE that seems on the cusp of becoming something. A leader in Randy Orton, a goon in Manu, Cody Rhodes and Ted DiBiase Jr. are chomping at the bit to show their worth. Hmm, reminds me of something but I can’t quite put my finger on it. I am sure it will come to me. 😉

I think they have a new DX in The Miz and John Morrison as well. They just need a catchy name. like Too Cool, no wait, scratch that. But seriously Miz and Morrison are gold on every program they are on right now. Like Mugatu said in Zoolander, they’re “So Hot Right Now!” I hope the WWE doesn’t rush along some kind of split between the two as is too often the case. They have an awesome chemistry and are able to work anyone into something entertaining and fun.

My point here is that there are some really great factions happening right now and I, for one, think the biz is better for it. Gang warfare however you package it has always been one of the things that people can relate to on a lot of levels. You all have people at work or school or where have you, that you don’t like or don’t like you. Ask yourself honestly how many times you and your co-workers have gotten together and “discussed” whomever you don’t care for. We have all done it once or twice on some level. Assuming you have friends of course! Now imagine it was okay for you and your friends to go and kick so and so in the face AND tell them what you really think! OOOOOOH FUN! Everyone can relate to that!

Now put the shoe on the other foot! What if you are the one ganged up on? How great would it be to get the chance to get one or two of those so and so’s alone for a few minutes inside, say, a steel cage and bash them about the head and neck? I have thought of that scenario MANY times! This is why these things speak to people on a very personal level. The cool kids at school. The bullies. The cliques. All need some kind of comeuppance at some point. The wrestling world is great for giving an outlet to people who need to get revenge. That’s why I hope these things stick around and aren’t fly by night groupings.

My favorite faction most of you never heard of was the Karachi Vice in the old Stampede Wrestling. It was a group of guys that included a Sikh (The Great Gama), the Cuban Commandos (the Cuban Assassin and “Champagne” Jerry Morrow) and Makhan Singh (Mike Shaw, a white guy in a turban which drew tremendous heat!) and their manager JR Foley, who at one point looked like Hitler! These guys were the epitome of evil in my day! And when my hero Owen Hart> got laid out by them I almost hit the ring as a child!! But when Owen got his revenge the feeling was intoxicating!

Owen battling back against insurmountable odds made me giddy as a child. Now I become giddy thinking of the prospect of A.J. Styles or Samoa Joe or Rey Mysterio or CM Punk doing the same thing with a new batch of world domination bent baddies! I hope you all feel the same.

Since New Years is around the corner and I tire of Christmas propaganda, let’s have a little fun shall we? I want everyone who wants to, to write in with their “Wrestling New Year’s Resolution.” I will read them all and put up a Top 5 or Top 10, depending on length.

I will get the ball rolling:

“I resolve (you HAVE to start it this way!) that in 2009 I will try to not call anyone douche while I wrestle.”

For anyone who knows me, you know this will be a large undertaking for me as I use that word as liberally as I breathe! I look forward to some creative responses. Again let’s keep these pertaining to wrestling as I don’t want to know about you wanting to quit smoking or lose 20 pounds or whatever inane resolutions you want to make for yourselves!

Beware imposters. Make sure you are supporting your local wrestling in all its forms.

In the mean time and in between time, that’s it. Another edition of the Devine Intervention. Bye now.