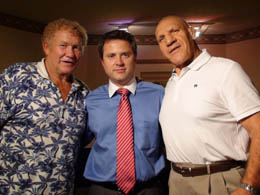 Kayfabe Commentaries burst onto the wrestling scene a few years back, releasing audio tracks to go along with matches, sort of like a wrestler’s commentary to their own match. Co-owner Sean Oliver said it was a cutting edge concept that continues to this day.

“We recorded the participants of various, high-profile matches doing alternate audio tracks, just like a director of a movie on DVD,” explained Oliver. “So now you can watch the match, but listen to the wrestler.”

Like most entrepreneurs, their reason for entering the shoot interview field was simple.

“Money,” Oliver said jokingly. “If we were to survive as a company, we had to up our game. We had the Guest Booker concept first. We shot that and it did very, very well for us. After a couple more, we expanded and launched the YouShoot series where the fans conduct the shoot interview over webcam and email. We also launched My Side of the Story.”

Success came quickly and soon Oliver and company found themselves receiving praise from the press for their work.

“So after a few series and a special or two, we found ourselves being credited with raising the bar for all shoot DVDs,” said a humbled Oliver. “It’s certainly a compliment when we see other companies digging a little deeper since our arrival. I guess we all win in the end.”

With so many shoot interviews already on the market, Kayfabe Commentaries had to branch out and seek different angles in order to stand out from the rest.

“We work hard at producing a quality product, and that means from conception, to execution, to style of the show,” Oliver said. “We are all wrestling fans here at Kayfabe Commentaries, but we came at the business from the perspective of the entertainment world, in which I’ve been active in for the past 18 years or so.”

Prior to entering the world of Kayfabe Commentaries, Oliver was a journeyman of sorts, working for a bookie in high school, directing TV commercials, working with finances on Wall Street and even entering the real estate realm. In the entertainment world, Oliver is a successful film and TV actor, whose credits include such shows as Law & Order and Sex and the City, as well as films such as Man of the Year and Pride and Glory.

Oliver, who turned 36 in November, is content with his work at Kayfabe Commentaries, and is still involved in the acting and real estate fields. He currently resides in New Jersey with his wife, Nicole, and three-year-old daughter, Mia.

Kayfabe Commentaries’ perspective on production of the shoot interview being more like entertainment production has led to rave reviews in terms of product quality and professionalism.

“Why can’t wrestling programming be presented intelligently? Why can’t it be edited slickly, have proper miking and sound, be concept driven and have an original music score?” asked Oliver rhetorically. “Sure, we could sit a guy down and ask him a list of 100 questions, keep the camera in one shot and be done with it, but we’re striving to create a legacy here on DVD. Each series has a certain personality and feel. They’re lit consistently within each series and the music is also an identifying feature in each series.”

Oliver feels that there’s a certain mystique that TV networks create that make their shows so appealing and he applies that philosophy to his company.

“When you watch Law & Order, you can tell after about a minute what you’re watching,” Oliver said. “That’s due to the entire milieu that is created by lighting, sound, writing and score. Well, our shows are no different. Our company structure resembles that of a TV network. We have wrestling programming for whatever you want, or we will soon.”

Kayfabe Commentaries has received praise from fans and those in the industry. “Sean and the crew are true professionals. They are very prepared and very knowledgeable,” said Terence Brennan, who promotes the Legends of the Ring convention. “It was a pleasure to work with them this year and I can’t wait to do it again next year.”

One of the most recent releases was The Great Debate ’08: Race/Sammartino, where the two legends took sides on various issues from wrestling history. Harley Race enjoyed the debate with Bruno Sammartino. 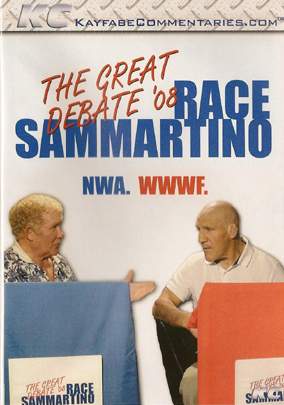 “Sean and his staff were great to work with,” Race said. “They showed Bruno and I the utmost respect. Not only in what we wanted to talk about, and if Bruno and I started walking down memory lane he let us just keep walking! I have interviewed with them before and would do so again because of their obvious professionalism.”

While each series of DVDs is different in their own way, it’s difficult for Oliver to pick which one he likes the best.

“I love them all for different reasons and I know that sounds like a bulls— answer, but we will only introduce shows that we feel passionately about, so it’s impossible to consider one more insignificant than another,” explained Oliver. “The Guest Booker series is what got us here, so that’ll always be special. It appeals greatly to the wrestling fan in me that fell in love with the machinations of the creative side of the business.”

After the Guest Booker series was released, Oliver and company developed the YouShoot and My Side of the Story series which also hold fond places within the heart of Kayfabe Commentaries.

“The YouShoot series is just plain fun,” said Oliver. “It’s wild and unpredictable. Plus it’s hosted by the fans, so I really get off seeing all of them participate. As for My Side of the Story, it’s special because of the great amount of reverence that we pay each of the feuds we chronicle. I think we captured a strong sense of attitude with that series. It’s probably the most stylized of all the shows.”

Earlier this year, Kayfabe Commentaries suffered a loss that hit close to home. Just one day after their filming of Guest Booker with Gary Hart, the legendary manager passed away.

“I had such mixed feelings about that disc,” Oliver said. “I didn’t want to rush it out after the announcement of his passing. I knew there would be others clamoring to stand on his casket and hawk merchandise, but I did not want Kayfabe Commentaries to be in that ilk. We’re a cut above. Our customers tell us that and our stars tell us that.”

It was a day after the passing that Oliver received a phone call that made his decision about the shoot much clearer.

“Gary’s son, Jason, called me the day after his death and we talked a bit,” remembered Oliver. “He told me that his family wanted us to release the DVD as a final tribute to his great mind. I told him I would, but I was not going to position it in such a manner to capitalize on his passing. Of course it would be mentioned, it was noteworthy, but I wanted it to stand alone as just another edition of the show and let Gary’s great mind be the lasting impression. At the end, we dedicated the shoot to Gary’s boys, Jason and Chad. Gary was great, a nicer man you could not find. He left such an impression on all of us here.”

Since opening up shop, Kayfabe Commentaries has been pumping out a new DVD each month. With a wide variety of shoots to choose from, Oliver finds it difficult to pinpoint his what their next piece of work will chronicle.

“We have some cool stuff ahead that I am excited about, like getting Bruno Sammartino and Harley Race together to have a presidential style debate about pro wrestling,” said Oliver. “You know, when I step outside myself and listen to a sentence like that, I think we must be nuts.”

Kayfabe Commentaries has also had to deal with some wild, off the wall guests.

“Wildest shoot? Jamie Dundee’s YouShoot I guess,” exclaimed Oliver. “He was bouncing all over the place. It was like trying to dance with a monkey being electrocuted.”

While on the subject of wild shoot interviews. Kayfabe Commentaries released another wild concept in October 2008 when they hosted the very first edition of Ring Roasts, which was a comedic tribute to the Iron Sheik.

“Ring Roast I was a tremendous success,” boasted Oliver. “A couple of dopey incidents are hogging the press on the event, but it was awesome. There will be plenty more Ring Roasts and it will continue to grow. It’s time for wrestling to take it’s place in a mainstream form of entertainment like the roast. Ring Roasts is perfect for the business as it blends comedy, history and tributary aspects of honoring the greats of the business.”

Brennan worked alongside Kayfabe Commentaries in co-promoting the Iron Sheik roast, which saw some controversial moments, including Scott Hall attacking a comedian for a joke about Owen Hart. “It was quite interesting to say the least. I think it will be a grand slam sales-wise considering the unexpected events that occurred that evening,” said Brennan. “It just goes to show you that not everything in wrestling is a work.”

According to Oliver, 2009 will see more big things on the horizon for Kayfabe Commentaries.

“The future of Kayfabe Commentaries will see more great wrestling entertainment and a lot less sleep for me,” Oliver laughed. “We will be launching two new series in 2009, Ringside and Timeline: The History of WWE. Ringside will sit you down with a wrestler as they watch some of their biggest matches on video and allow them to go back in time and pore over every detail of the match.”

Oliver admits the more time consuming of the two projects would have to be the historic retrospect on WWE.

“The Timeline: History of WWE series is very special,” added Oliver. “Each edition will take one year and have it examined in remarkable detail from January to December. Each year will be hosted by a major WWE player from that time, so in the end, after 70 or 80 episodes, you’re DVD shelf will have all the years, relived by all the stars. The entire story of the biggest wrestling organization will be told through the eyes of the biggest stars. It‘s an ambitious project, but we never aim small.”

— with files from Matt Johnson