By BRYAN RENDA – For SLAM! Wrestling

Anyone who has ever watched a wrestling match has wondered what it’s like to actually get into the ring. For one weekend, Squared Circle Wrestling in Toronto offered the chance to find out. This was an opportunity I was not going to miss.

The pedigree of the participants differed dramatically. A few had an amateur background, while others had no knowledge other than what they had seen on TV. Personally, I have been a fan as long as I can remember. I also have been involved with independent wrestling shows for the last couple of years, including refereeing for the last six months. Actually wrestling has always been the final destination on the map; it has been a dream since childhood. I considered this weekend to be my first real step towards that goal. 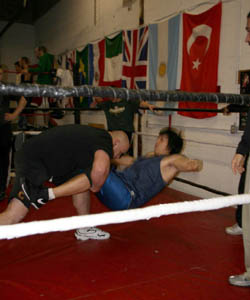 The greatest part of the camp was that anyone with an interest in what it took to wrestle could sign up. It was obvious fairly early on that a lot of the group were not going to take this any further than this weekend. Some of those who held aspirations of an in-ring career also discovered that it was a lot harder than it looked, and rethought their plans. Despite all this, this was a solid group who had the passion and the desire to see this journey through.

We began with basic lockups, counters and holds, and were soon progressing to rolls and taking our first bumps. By the end of the weekend, we could all run the ropes, do basic take-downs and perform moves such as snap-mares, Russian leg sweeps and sidewalk slams. Best of all, we were given a chance to put it all together in mini-matches, complete with some over-the-top theatrics by a few people. There was even a post match attack or two.

Along with the in-ring component, we were also given a chance to develop a character and cut a promo. It was obvious that a few had been doing this for some time, cutting bathroom mirror promos at home. There were a few gimmicks and promos that were as entertaining and had as much potential as any I’ve seen recently.

Through all the bumps, both literally and figuratively, a bond quickly developed between us all, no matter our abilities. When one stumbled or encountered difficulty, the rest offered support and encouragement. With this help, and the will to see it through, a few people shocked us (and most of all, themselves) and performed better than expected. If there is one thing that I will take from this experience, it’s that. If you want something bad enough, you will find a way to make it happen. 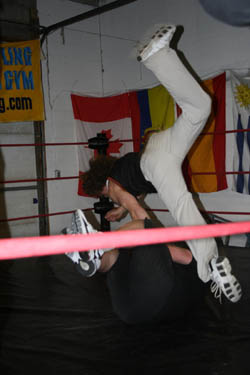 The entire weekend was recorded on DVD for each participant to show their family and friends, though I’m sure a few will edit a personal YouTube highlight reel for themselves. Along with that, an obvious bond developed between a core group of us that intend to follow up on this weekend with the regular training.

I personally want to thank everyone who made this possible. Among those, Laury Silvers, who organized the weekend and gave us all a chance most would otherwise never have had. Rob Fuego, head trainer and owner of Squared Circle, allowed us access to his school, without which this wouldn’t have happened. He took a bunch of rookies and taught us that it’s much harder than it looks, in good humour the whole time. All the trainers, I can’t thank you enough for patiently guiding us through our training. SLAM! Wrestling’s own “Bloodthirsty” Bob Kapur provided pointers and advice on our promo work. Finally, all the other students who shared with me a weekend of laughs and fun times. You all got in the ring and can firsthand tell anyone that this is certainly not fake.

Some will be able to say they took their bumps and did their best at what was a one-time deal. All will take from this weekend memories that will last a lifetime. I, among others, will look back at this as the first step in what will be a long journey. I know I will be back.

Bryan Renda is a wrestling fan from Niagara Falls, Ontario.