Returning to duty relatively fresh and healthy at the Survivor Series after a welcome break in the summer, Edge is slowly readjusting to the regular routine of the wrestling regimen. Making an appearance last week along with Natalya and legend Rocky Johnson at the Toronto Daily Bread Food Bank, Orangeville’s favorite son chopped it up for a few with SLAM! Wrestling with The Beard right at the top of the list. 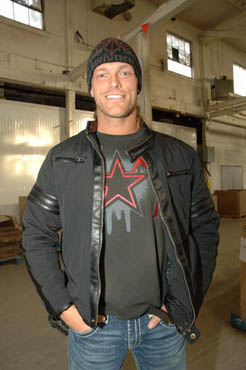 The Beard was the talk of fans, food bank volunteers and media alike with a sheepish Edge flashing the you-got-me look to great effect when a few people pointed out something was amiss. “I figured I’d grow it out,” he said casually. “I was supposed to be a little deranged when I left, so I thought I should probably look a little deranged coming back, so … I got so many different things about how it looked. I got The Allman Brothers, Skinner, Jesus, got a Charles Manson. And it was like back-to-back too. From Jesus to Charles Manson. That was interesting,” he said with a chuckle.

“(My girlfriend) despised it. Just despised it. She’s like ‘Shave it off now.’ I’m like ‘Nah…’ You only realize how thick it is until you have to shave it off. I was happy it didn’t grow in white or anything.”

Things seem to be falling into place for Edge, with local indy wrestler and buddy Nick Cvjetkovich — better known as Kizarny on Smackdown — recently hired by the company. “It’s great. I think he’s trying to figure out what it is (the character) and nobody really knows,” he observed of his friend. “I didn’t know what the hell Edge was (in the beginning). I think now it’s what style of wrestling he should use for the character. He probably doesn’t want to come off as a satanic Eugene. You don’t know what’s going to work until it actually works. He’s totally happy, he’s got a job and getting on TV. When I first came in, when Jay [Reso] first came in, we didn’t have anybody to ask, ‘Hey, do you have any ideas?’ We kind of just had to go. So at least I can kind of help him, say, ‘That worked’ or, ‘That didn’t work.’ Kind of steer him towards the path a bit, because he knows I’m not going to BS him.”

Completing the cipher would be the return of childhood friend Christian Cage (Jason Reso) to the former federation, although he is unsure of what path Christian will take. “I hope so, man,” he said cautiously on the possibility.

“I mean if I could have Nick, Jay — I mean we grew up together. You never think all three of us could actually be in the same place. But he (Reso) has to do what’s best for him. If it’s being down there (TNA), than that’s what he’s got to do. But if it’s being up here with us, I’d prefer that. It’d be great.”

But wouldn’t Edge & Christian 2.0 be a step backwards for the established R-rated superstar? “The way I look at it is, I have enough confidence in what I’m doing I won’t let anything be a step back,” he reasoned. “If anything, just take it and make it work. I’ve tried to take that mentality with anything, even if I look at something and go ‘Ooh. Ow. Oh well, make it work.’ Just go full-bore with it, because if you sit there and piss and moan about it, it’s probably not going to work.

“Like I did with the whole Vickie [Guerrero] thing, it’s like, ‘You cool with this Vickie?’ She said, ‘Yeah.’ I said, ‘Alright, that’s cool.’ She said Eddie would get a kick out of it, I was like, ‘Sure, yeah, alright.’

“It can be so simple sometimes. Just make it work.”