The WILD ride of Miss Danyah

During the day, she is Danyah Rivietz, an administrative assistant living a seemingly ordinary life. But by night, she transforms into her almost super heroine persona Miss Danyah, a professional wrestler who entertains crowds nationwide. In addition to this, she is also a fitness professional/model, which begs the question “how does she do it?” Nobody said life was easy, but for someone this tough, the only thing she could be is a pro wrestler.

Above anything else, wrestling is Rivietz’s main passion. She has always been attracted to the impressive physiques, characters and athleticism that make pro wrestling what it is today. Like many young fans, one of her earliest inspirations to get into the business was the man who was presented as the definitive hero of that era: Hulk Hogan. 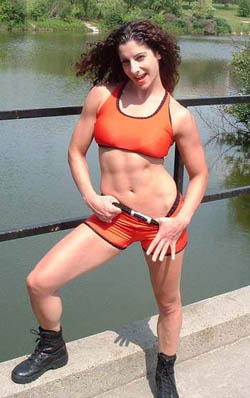 “I have been watching pro wrestling since I was a child. I loved the storylines, the myths of masculinity and femininity, the characters, and the athleticism,” Rivietz recently told SLAM! Wrestling. “Hulk Hogan definitely did it for me. I was and always will be a Hulkamaniac.”

As Rivietz grew older, she started to have a clearer understanding of the technical side of wrestling and respected the athleticism and skill of wrestlers such as Bret Hart, Ric Flair, Mr. Perfect and Eddie Guerrero. But when she wrestles, Rivietz always tries to be unique.

“There is no specific wrestler that I try to emulate,” Rivietz said. “However, if I do like a certain move or characteristic, I will try to incorporate it into my repertoire.”

In the early part of her career, Rivietz trained at Squared Circle in Toronto under the tutelage of Rob Fuego (Rob Etcheverria). Fuego had nothing but good things to say about her work ethic and how she has improved over the years.

“Danyah was always in top shape and willing to learn,” Fuego said. “When she started, she was a little hesitant to try any aerial moves. She would always remain on her feet, but I’ve noticed in some of her recent matches that she does a little more of the aerial stuff now.”

Rivietz was very impressed with the instruction at Squared Circle Training, as they’ve prepared her for what’s to come, by teaching her more than one style.

“Rob made us work with everyone, in order to adapt to different shapes and sizes,” she said. “I have no problem training with the guys, because wrestling is wrestling, whether you’re male or female.”

Prior to her pro wrestling training, Rivietz had taken some kickboxing classes and as the extracurricular activities started to get too much for her to handle, she was forced to choose between kickboxing and wrestling. As much as she liked kickboxing, she couldn’t give up her dream. 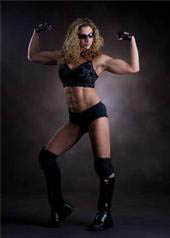 Fuego finds it easier to train someone with an athletic background, but says it got frustrating at times, trying to teach Rivietz how to work a wrestling match, without shooting on an opponent.

“Danyah would incorporate some of her kicks into the matches and some people would complain that she was kicking too hard,” Fuego said. “I had to instruct her to hold back a little bit.”

When she started at Squared Circle, Rivietz said she received a lot of help and advice from some of the more advanced students. One of them was former TNA Women’s Knockout Champion Taylor Wilde (real name Shantelle Taylor).

At only 5-foot-8 and 128 pounds, Rivietz may not be the biggest female in the business, but Taylor says she has other attributes that definitely make up for it.

“Danyah is a lovely person. She is hardworking, intelligent, and driven,” Taylor said. “Those qualities set the foundation for a career in wrestling for the long term.”

Taylor added that Rivietz is doing an amazing job on the independent shows and should keep it up and decide what she wants out of the business.

“I think every person that gets into wrestling hopes to work for a major wrestling company ultimately. World Wrestling Entertainment is full of opportunities and the TNA knockout’s division is continuously expanding,” Taylor said. “Danyah has made strides in the Ontario Indy scene and has built up some great career momentum. I only wish her the best and I wish her luck!”

Former TNA star Johnny Devine also played a hand in training Rivietz, as she was a member of Devine’s dungeon.

Although Miss Danyah is dubbed the “Sin City Vixen” and billed as being from Las Vegas, Danyah Rivietz is actually a Toronto native. She has two degrees: one in French and one in Kinesiology and five fitness certifications. She is also a guest columnist for Tha O Show.

Rivietz, 26, is the current WILD (Wrestling’s Independent Ladies Division) champion and is confident enough in her abilities to believe that she has a promising future in the pro wrestling business.

Rivietz will be defending her title in the third annual WILD tournament, which is part of Great Canadian Wrestling’s (GCW) super show this Sunday, November 30 at Royal Canadian Legion Hall in Oshawa, ON. The show starts at 2 p.m.

This is Blaine van der Griend’s first piece for SLAM! Wrestling, though he is a veteran of work for our friends at The Fight Network. Shoot Blaine a welcome to SLAM! Wrestling email at [email protected]