PS3’s Smackdown vs. Raw 2009 has plusses and minuses

Smackdown vs. Raw 2009 for Playstation 3 has many more pluses than minuses and at the end of the day it’s a lot of fun. This version seems to have a few more flaws than in the past yet the enhancements more than make up for it. If it sounds like I am split down the middle with this title, well, I am. Let’s go through why.

The quick play feature is tremendous and there is no shortage of different types of matches. I played a “Hell in the Cell” bout and that was fun, and with the women I did a “King of the Ring” and that was good too.

The wrestlers look stellar except for their mouths — that’s a little off; but I did quickly get over that. John Cena, HHH, the Undertaker, Kelly Kelly, Michelle McCool and the rest all look great, and act realistically, but there are a few flaws that I found during gameplay. 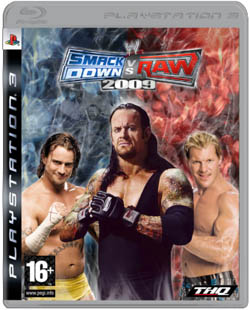 The first was the translucent referee. I don’t like the fact that when he starts to make a Star Trek-esque disappearance it distracts me every time. I think a better answer here would be make the referees a bit less mobile and then they wouldn’t get in the way. I also hated the fact that you can punch through your opponent. I thought that was gone forever but it’s back!

Another weird feature is the way some wrestlers move their hands when they are down. It’s hard to explain but I swore Cena was Edward Scissorhands at some points.

I like the fact that you can change wrestler costumes and the way you can really customize each match. To me the best feature is the “Road to WrestleMania” option. You pick a wrestler and then the game tells you it’s xx days until Wrestlemania. You then see the locker room and before you know it you are on your way after a terrific video presentation of your superstar. It’s a way of giving this game a terrific role-playing feature, and even though they have had them before, this is by far the best that I can remember.

Every brand of WWE is included and fans want that. THQ always thrives on the amazing detail and realism that they include each year.

I love the depth of the fans and their signs and their constant movement. That aspect of the game is the best that I have seen to date in any video game. I didn’t like the way that MSG looked like any generic arena; too bad on that one.

My WWE lets you save your best moves on a highlight reel and that’s always fun. The grapplers’ intros with music have gotten even better. The pyrotechnics in some of them are tremendous.

Beth Phoenix sits into a Sharpshooter on Mickie James.

In my Diva match I was amazed at how fast they made the girls and it seemed easier to pull off their best moves as compared to the men’s division. I quickly learned when a female wrestler rides the ropes up and down something amazing happens to their CGI bodies.

The Tag Team matches have been improved and in every match I would try to set my finisher early so I could really be ready for an early pin if possible. I think the submission matches are far more fun and challenging than the pinfall matches but maybe I am just sadistic in that way.

The announcers were good and JR and “The King” looked good and sounded good. To me they are the best combination in the game.

You can design a finisher and play an Inferno Match. These are all great inclusions. I can say it’s worth the $59.99 price point but I can’t say that somebody should make this title the top choice on the holiday shopping list.

Russ Cohen is the president of the Baron Mikel Scicluna Fan Club. To share your memories of the Baron with Russ, email him at [email protected].