It has been called the most demonic structure in professional wrestling history. A match so evil it has only been used to settle the most violent of feuds. Some call it the Undertaker’s match. Others feel that Triple H is the master of its domain. Either way, no one can argue that Hell in a Cell has made for many memorable moments.

There have been only 16 matches held within the Cell in the past 11 years, plus one Kennel from Hell… but that is best ignored. Fourteen of those matches can be found on the new three-disc set from the WWE. The only ones excluded are the terrible Wrestlemania XV bout between The Undertaker and The Big Boss Man, which is a good thing, and Undertaker vs. Edge from this past Summerslam. 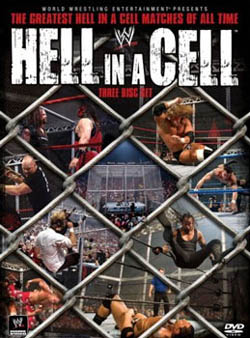 Some quick stats – The Undertaker was in the first Hell in the Cell against Shawn Michaels in 1997. He has wrestled in nine of them total. Triple-H’s first Cell match was against Cactus Jack in 2000 and his total matches come to seven. The next highest number goes to Mick Foley with four, as well as one match with him as guest referee. The heavyweight championship, in various incarnations, has been defended in the Cell six times but never changed hands. Nearly every top star in the past decade, with the exception of John Cena, JBL, Chris Benoit and Eddie Guerrero, has been in a Cell at least once.

Host Mick Foley provides insight into the history of each match on the Hell in a Cell DVD, and the bouts are preceded by a video package. But how are the matches? SLAM! Wrestling’s Jon Waldman (JW) and Jason Clevett (JC) teamed up to tackle nine hours of Hell, and give their thoughts on each match.

(JW) The original match, to me, still stands as the benchmark. Whereas the Ladder Match DVD showed that innovation has been the name of the game, the spots that HBK and ‘Taker did here are just as, if not more vicious than 90 per cent of what happened in subsequent bouts. Michaels falling halfway off the cage and being lawn-darted are two sick spots that WWE hung its hat on before “that match”.

Historical Significance: Along with being the first HIAC match, the bout also featured the debut of Kane and the start of one of the longest-running on-again off-again feuds in WWE history.

(JC) One of only two Cell matches to be held on RAW – more on the other in a moment. This match defined what much of the attitude era was about, as there really wasn’t a match, just a giant brawl that furthered several storylines between Undertaker and Kane, Undertaker and Mankind, Austin and Mankind, Austin and Kane, and Austin and Undertaker. A red-hot crowd and some awesome brawling make it an entertaining way to kill ten minutes – one of the shortest matches on the set.

Historical Significance: Other the being the first Cell match on RAW, none really.

(JW) If you haven’t seen this match yet, then you’re missing out on perhaps the most famous Attitude Era bout of them all. Looking at it now, so many years later, the impact is still there. The workrate fan won’t like this, nor will anyone who is a friend of Mick Foley. As a match, it’s horrible, but so was Andre vs. Hogan and no one in their right mind would say to avoid it.

Historical Significance: Though Mrs. Foley’s baby boy was already a household name in WWE circles, this cemented his spot in Federation lore. It also shaved quite a few years off his lifespan undoubtedly.

(JC) Most people don’t remember this match. It is understandable as the standout memory of 1998 is Foley falling from the cage at King of the Ring. However, Foley takes a pretty nasty tumble off the side of the structure through a table in this one.

Historical Significance: This would be the last Cell match until Wrestlemania and the last one on RAW. From a match standpoint, it is actually better than the King of the Ring match, it is a fun brawl that certainly deserves its place in history.

(JW) It’s hard to say which match made Triple H’s career – this one, or the Royal Rumble bout against Foley. Personally, I’d go with the RR match, but the argument can easily be made for this one. Big spots, blood, and barbed wire all play a part here, along with a tribute moment to Mick’s earlier HIAC moment of fame.

Historical Significance: It would have been so much more meaningful had Foley actually stayed in retirement. As is, Triple H is the only one who gains from this bout.

(JC) The one and only time that a multi-man match was contested within the Cell saw Kurt Angle defending his belt against five other challengers. A lot of people don’t remember this match fondly. Re-watching it, I actually quite enjoyed it. It certainly brought back a lot of fond memories of the attitude era – feuds in this bout included Austin vs. HHH, Austin vs. Rikishi, The Rock vs. Rikishi, The Rock vs. Kurt Angle, and Kurt Angle vs. The Undertaker. Storylines interwove and were fun to watch. Rikishi’s fall is rather contrived, but still looks cool. A spot with Austin smashing a video camera on a dolly into Triple H is also really neat to watch. A match definitely worth watching in my opinion.

Historical Significance: The only Cell match for Angle, The Rock and Rikishi, the only time that a multi-person match was held (besides tag team matches), I enjoyed this more than some other more recent Cell outings.

(JW) The string of good HIAC matches continued for WWE with this match. By this time, Jericho had well established that, when needed, he could go into the extreme violent matches in WWE and not look out of place, while Triple H was establishing this as “his match.” The result is one of the best bouts between the two, which is saying a lot because Jericho and Hunter have great chemistry in the ring together.

Historical Significance: You might be surprised to learn that this is Y2J’s only HIAC bout. Methinks he’s due for another.

(JC) This is a heck of a match, that sees both wrestlers as well as Paul Heyman gushing blood. While it didn’t have the “Oh my god” moment that characterized past Cell matches, it was a violent, brutal battle between two monsters. Only the second time that the combatants haven’t exited the cage during the match, a trend that continued for the rest of the Cell matches. The final image of Lesnar standing on top of the Cell is quite the visual.

Historical Significance: Marked a change in style from people taking crazy bumps off the Cell to the combatants being contained within, which was the whole point in the first place. Cemented Lesnar as a main eventer.

(JW) This started a trend of declining HIAC matches. Honestly – did anyone going in think Kevin Nash was going to win the title? Big Kev and Triple H, admittedly put on a fairly watchable bout, but when you’re used to blowaway matches in the Cell, disappointment reigns.

(JC) One of the longest rivalries in recent memory in WWE, the feud between Triple H and Shawn Michaels, which had so many amazing matches, was capped off with a match that was incredible. Incredibly boring. Somehow these two managed to have one of the worst Cell matches in history, a 47-minute snoozefest that stroked their egos and bored the crowd. If they had cut the match in half and just focused on some of the major spots, this would have been a heck of a match. Instead, you have the one match on the DVD that I honestly recommend you hit the skip button.

Historical Significance: Effectively ended the feud between the two, and will go down as one of the worst Cell matches ever.

(JW) This was the final nail in the coffin for Evolution and the last time the two would meet in a feud that lasted about a half a year. Batista had long before gained the admiration of fans, but throughout this bout he proved his toughness to the few remaining doubters he had. Triple H made Batista look like a million bucks, putting over the “young” upstart in his first Cell loss. It’s far from a classic, but worth seeing nonetheless.

(JC) Another long feud that culminated with the Cell. Although their Wrestlemania 21 bout was excellent, the rest of the feud between The Legend Killer and The Phenom was pretty dull. Although not the greatest HIAC in history, it had its moments and is a fun match to watch.

Historical Significance: This match marked the end of Bob Orton Jr. in WWE after a run as Randy Orton’s cornerman. He bled heavily in the match, as did both participants. He hadn’t disclosed his hepatitis, which understandably upset the company and put both Taker and Orton at risk. 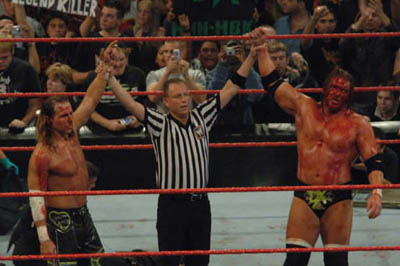 The referee raises the arms of Shawn Michaels and Triple H after their Hell in a Cell victory over the McMahons & Big Show at the WWE Unforgiven pay-per-view in Toronto on Sunday, September 17, 2006. Photo by Mike Mastrandrea

(JW) The less said about this one the better. If there was any one match that killed the Cell, it was this one, which was horrible for a number of reasons, long before Vinnie Mac joined the Kiss my Big Ass Club. Unless you’re really, really into DX’s twisted humour, do not watch this match.

Historical Significance: This was Big Show’s first Cell match, surprisingly, and also one of the last times (please let it stay like that) that the McMahons entered the ring to compete.

(JC) The only face vs. face Cell match, and it had a very weird dynamic to it. I hadn’t seen the match prior to getting this DVD, and from an in-ring standpoint I enjoyed it. Undertaker and Batista had a string of great matches in 2007 and this was up there. It just didn’t feel like a Hell in the Cell match to me, because of the face vs. face dynamic it just didn’t work as a match to settle a blood feud.

Historical Significance: Placed the Undertaker ahead of Triple H as king of the Cell. Placed the seeds for Undertakers feud with Edge which lead to some of the best matches of 2008.