Christian Cagey about his future in TNA

TORONTO, ON — Approaching his third anniversary in TNA Wrestling, Christian Cage has accomplished goals that many wrestlers wouldn’t be able to in their entire career. Rather than coast on his past achievements, though, Cage is looking for even more success in the future. This weekend’s Bound For Glory pay-per-view seems to him like the perfect launching pad.

“My goal? To get to the top,” he told SLAM! Wrestling while on a promotional stop in Toronto this past week for Viewers Choice Canada. “I want to have another long world title reign, and as champion keep moving the company in a forward direction, continue on with good house show business and pay-per-views and things like that.”

For Cage, wearing the belt one more time — since coming to TNA, he’s twice won the NWA Heavyweight Championship — is more than simply being recognized as a great wrestler. “When you’re the champion,” he explained, “it shows that the company has the trust in you to be the face of the company, to represent it, and to be the measuring stick by which everybody else is compared. You become the centrepiece of the company.” 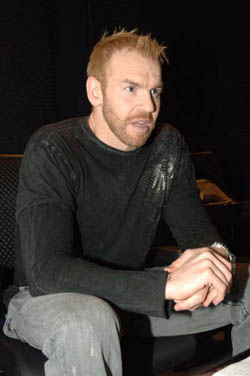 Christian Cage talks about his career with SLAM! Wrestling. Photos by Mike Mastrandrea

Cage won’t get the chance to win the belt at this weekend’s pay-per-view, however, he will still be involved in a high-profile match. It was announced on TV this week that Cage will be competing in a three-way dance against A.J. Styles and Booker T. Beyond the match, there is an underlying storyline around this contest, one in which Cage will undoubtedly play a pivotal role. For the past few weeks, the company has been setting up an onscreen feud between its veterans and its younger stars (the main event of the PPV is one such affair, as Samoa Joe defends his TNA title against Sting). The concept of the feud isn’t entirely new — indeed, WCW tried a similar storyline in its waning months, where young up-and-comers squared off against veterans who had been in the company for years and refused to pass the torch — but Cage says that TNA’s version “is actually a bit different than how it was done before.”

“(In this case), the young guys were the first ones there. They were the building blocks for the company that took the opportunity to make it into something even before anybody even really knew who they were. When (the veterans) saw there was something here, that’s when they jumped over and tried to take all the glory for it, saying that it was because of them that the company has a Spike TV deal and monthly pay-per-views, and that without them, the younger guys wouldn’t be becoming household names. I think it’s going to be more interesting this time around.”

Cage hasn’t yet picked a side in the feud, and it’s expected that his allegiance will be revealed in the Booker-AJ match. “I’m the guy who’s just sort of become a veteran and stepped up to a spot where a younger guy would be trying to get. But I’m not too far removed from being that young guy who was looking to step up and take that spot. I’m playing it in the middle right now, and we’ll see where it goes from there.”

No matter which way he sides, Cage is sure that the fans in attendance will let their reactions be known, as he has nothing but praise for the Chicago crowds. “I think Chicago fans are comparable to those in Toronto, in that they really get into the shows. They really support the talent and have an appreciation that (we’re) there to entertain them, and they let you know what they like and don’t like, and that’s what it’s all about.” When the crowd feels like they’re part of the show, he elaborated, it always leads to a better product. “They feel more attached to it, rather than when they just watch it at home like a soap opera or a sitcom every week,” he said.

For this reason, Cage likes the direction TNA has been taking over the past couple of years, whereby increasingly, pay-per-views are being held outside of the company’s home studios in Orlando. It’s important to do so, he said, if the company wants to continue to grow. “Eventually, you take it to the masses, and give the people who are watching the show the experience to watch it live. We have to do whatever we can to get as big as possible, and make the shows intriguing for our fans. If we can do that, they will want to tune in and come to our shows, and the rest will take care of itself.”

That will not only help TNA specifically, but the wrestling business as a whole, and that’s of paramount importance to Cage, as he’s hoping to be active in the business as long as he can, whether it’s in-ring or otherwise.

“I’m going to keep (wrestling) as long as I can stay healthy — knock on wood, I’ve never had a major serious injury. After that, I would definitely love to pass on to younger guys whatever I’ve learned, whether it’s with promos or announcing or training. It feels good to be in a position to be able to help guys out, and especially guys who have a hunger to learn and to step up and want to go far in the business — it’s humbling, but it’s nice.”

“Beyond that, I’ve always said that I would do it until it wasn’t fun anymore. Once it became like a real job, maybe then it will be time to hang it up and do something else. But when you’re walking into the ring every day and still say to yourself that you love your job, then there’s no reason to quit.”