Camaraderie the ticket at Titans in Toronto III

VAUGHAN, ON – Wrestlers and fans alike gathered together at The Factory Saturday night to celebrate professional wrestling and its unsung stars of years past at the Titans in Toronto III benefit dinner for the Professional Wrestling Hall of Fame. 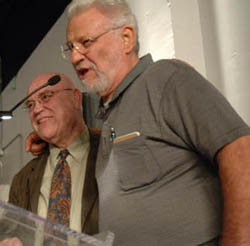 Waldo von Erich at the podium jokes around with Paul Leduc. Photo by Mike Mastrandrea

Featuring the opportunity to mingle and pick the minds of the legendary workers of yesteryear, the event retained its imitate and genuine aura that has come to define Titans in Toronto. Fans and wrestlers sat together at tables and there was no wristband policy in effect to grab an autograph or take a picture with anyone. Portrait photographer Andrea Kellaway was also hand on to take professional portraits of everyone free of charge.

“Supermouth” Dave Burzynski handled the MC duties admirably, warming up the crowd with an amusing story of “My breakfast with Andre,” and running down for those who weren’t keeping score the vast categories of wrestler nicknames.

“They’re almost like your relatives who aren’t related to you but they are related to you,” he explained afterwards to SLAM! Wrestling. “Because you spent so much so time with them, and on the road, and you did so many things with them. You fought, you laughed, you cried, I mean how could you not like being around your fraternity and part of your life?”

Titans veteran Big Mac (Mervyn McKie) has attended all three events and many other similar ones. He talked about some of his favorite moments of the night. “Duncan McTavish, who is a great friend of mine, I’ve known him for at least 30 years, Reggie Love and Waldo Von Erich; it’s amazing to see that all these guys are still able to come out.

“Wille Farkus, oh geez, it was great to see him because we have traveled throughout the United States and the east of Canada together, so it was very good.”

PWHF President Tony Vellano Jr., blessed the ceremonies and spoke afterwards about the importance of protecting the legacy of professional wrestling with a non-partisan Hall of Fame. “Titans in Toronto III is something I look forward to every year and I’m looking forward to number four. This fundraiser is the largest fundraiser outside of the induction weekend. And this thing really helps us move along, because if we didn’t have people stepping up to do fundraising for us, we wouldn’t be able to have the hall that we want, or be able to do what we want to do with the hall, because everything is monetary and it costs. And nowadays with all the crazy economics out there to where the money isn’t available for us, we rely on sponsorship, donations and fundraising. That’s why this is so important to us and I appreciate what Greg did, the Magen Boys did, and all the wrestlers who showed up tonight.”

“It’s nice to honor and pay tribute to all the old veterans of the business that paved the road for all us young guys,” added Highlander Robbie.

Smith Hart, the first son of the late Stu Hart, saw some old friends he hadn’t seen in awhile. “The most special thing without a doubt is meeting people like this. Meeting Waldo Von Erich, who made a lot of money for my dad or Leduc and people who worked for my dad when I was a kid. The Bearman’s daughter I met, I didn’t know she wrestled, Rachael Dubois. Cyclone and Hurricane Smith, great old guys who I haven’t seen since 1958 when I was ten years old. That’s the best part.”

He also confirmed that he will be in Barrie to watch his son Mike Hart wrestle on the October 2 card. Asked if he had any advice for the wrestlers of today Hart pulled no punches.

Notorious heel Waldo Von Erich made history with Bruno Sammartino by wrestling the longest bout ever recorded in Madison Square Gardens history. “An hour and 28 minutes,” Von Erich smiled. “If it went after 11 o’clock at the Gardens, we had to pay an extra fee. So we went in a little before 9:30 and we were still wrestling at 11 o’clock.

Masters acknowledged the hard work and dedication of those before him, adding that they “paved the way for me” and his generation.

Love, who is known for his wrestling cameo on the comedy show Bizarre, amused the crowd further by adding his own Andre story into the fray.

McTavish and Cyclone both provided impassioned pleas to continue to support each other. Cyclone informed the crowd that colleague Billy “Red” Lyons was in ill health and to “keep him in your prayers.”

Johnson, dubbed “The People’s Uncle” for his relation to The Rock, praised many of his contemporaries, helping keep things light with his witty banter.

“This has been an experience that you can’t buy with money because these are real people,” testified fan and colleague Larry Solar. “We were just talking, if this was WWE, you’d have 5,000 people and you’d meet two wrestlers. But here, such a nice group of people and everybody was walking around and talking. Everybody wanted to speak to a wrestler or get a picture and I like that. And what this is all about and it was shown here tonight.”