He may have been small in stature but midget wrestler Pee Wee James was one of the giants in pro wrestling for 20 years. James died in Ottawa, Ontario after a lengthy illness on September 16, 2008. He was 75. 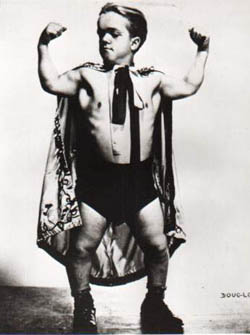 Born in Montreal, he broke into the pro ranks in 1948 at age 15 under the guidance of promoter Jack Britton. For the first several years, he wrestled under his real name of Raymond Sabourin. As early as 1949, he was appearing under that name in fledgling promotions such as Larry Kasaboski’s Northland Wrestling Enterprises throughout Eastern and Northern Ontario

But the midgets quickly became an integral part of pro wrestling cards and Britton soon moved his base of operations to Detroit from where he eventually dispatched midget wrestlers to all corners of the wrestling world. His son Gino Brito, who was to become a future mat star, helped transport and chaperone the growing number of midgets in his father’s stable.

Whereas regular wrestlers would travel from territory to territory sometimes staying in one locale for weeks or months, the midget modus operandi was somewhat different. Not only did these mighty mites move fast in the ring but they also moved quickly from promotion to promotion such was their popularity and demand.

Into this whirlwind wrestling world entered young Sabourin, still a teenager but soon to help lead his contemporaries into the bright lights of the world’s squared circles and put the midgets on the map forevermore.

He was soon christened Pee Wee for obvious reasons and shortly thereafter “James” was added to his ring identity. Pee Wee James became a name that resonated with fans everywhere. Along with other stars such as Little Beaver, Sky Low Low, Tiny Roe, Fuzzy Cupid, Sonny Boy Cassidy, The Mighty Schultz, Major Tom Thumb, Lord Roger Littlebrook, Little Brutus and Prince Salie Halasie, they became the darlings of the mat and blazed the trail for future generations of midget mat maulers.

Later in life, Littlebrook would reflect that it was James, Tiny Roe, Sky Low Low and Tom Thumb who were among the first of the little people to gain recognition and open the doors for others to follow.

Not only were the midgets amusing and entertaining but they could also wrestle. They were in demand and their popularity rivaled stars such as Lou Thesz, Gorgeous George and Antonino Rocca. Along with lady wrestlers and wrestling bears, they became a staple of wrestling cards and lent a circus like atmosphere to the ring that was compatible with the wrestling business.

Pee Wee more than held his own, teaming with and opposing all of the top midget stars in the game. Not only was he well traveled throughout Canada and the United States but he also toured Japan and Mexico.

But his world became even brighter when he met Rita Labrosse, also a dwarf, from Ottawa in 1964. The couple was married a year later and had been married 43 years at the time of Pee Wee’s passing.

“He was a very nice and caring man,” Rita said of her husband. “We dated for a year before we were married in Montreal. There was a large crowd at the wedding both inside and outside the church. Many of them were just fans. He was very well liked.”

In fact, Pee Wee James was a villain in the ring but it has become a familiar refrain that the meanest heels are often the nicest guys outside the ring.

“When we married, I traveled with Raymond in a mobile home, along with Little Beaver and another midget wrestler named Gonzales who I believe was only in the business for a few years. By that time in his career, Raymond had already toured Japan, so I missed that trip,” she sighs wistfully.

But Pee Wee was still active throughout North America and took Rita to the States many times on his bookings. They would begin touring the northern states and work their way down to Miami, Florida. 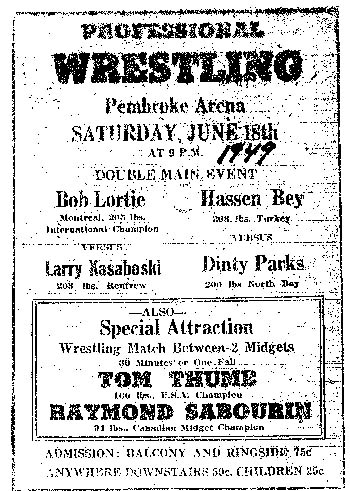 “Finally he retired in 1968,” Rita explains. “He was no longer agile. Age and injuries had slowed him down.”

One of Pee Wee’s best friends in the business was Little Brutus who was often a tag team partner. His career, like most midgets, followed a similar path. Jean Jacques Girard was surprised and caught off guard when contacted in Saint-Jean-Sur-Richelieu, Quebec and notified that his friend had died. The pair had made a formidable team.

“He was a good wrestler, a good man,” Brutus recalled, “always joking around and fun to be with.”

Brutus followed Pee Wee into the business in 1954 as a teenager and like his friend, lasted 20 years on the mat before retiring. He worked as a police dispatcher in St. Jean but also wrestled another four years around his home area before finally calling it quits in 1978.

In the 1970s, Rita and Pee Wee made Ottawa their permanent home. He was confined to a wheelchair for the last ten years because of spinal problems but still managed to get around the city and attend neighborhood events. In the last several years, he shared a lot of memories with his wife and she became familiar with all the great names of the past although she hadn’t met many of them in person.

Writer Earle Yetter paid tribute to James at the height of his career in a 1962 edition of Boxing and Wrestling magazine:

“Fans get a kick out of the fantastic didoes of Pee Wee James who is really the comedian of the troupe. His bow-legged strut and red beard are really something to behold. This lad can hand you a chuckle by merely looking at him. On occasions, he will entertain with tenor solos, and he appears to get as much fun out of his mat chores as the fans.”

While wrestling was always a business and somewhat serious at times, there was still much time for fun and pranks among the wrestlers. Like many before him, Pee Wee fit perfectly into this mysterious brotherhood that remained secretive for so many years. But when you leave the ring for the final time, suddenly the cheers stop and you are forgotten by a legion of fans.

By all accounts, Pee Wee missed performing but nonetheless led a full and productive life and shared his many memories from his ring days. He was not forgotten by family or friends. A memorial Mass was held at Ste. Genevieve Church in Ottawa on Saturday, September 27.

It was a fitting way to say goodbye to a man whose life and career will forever be a testament to pro wrestling’s many great midget wrestlers.