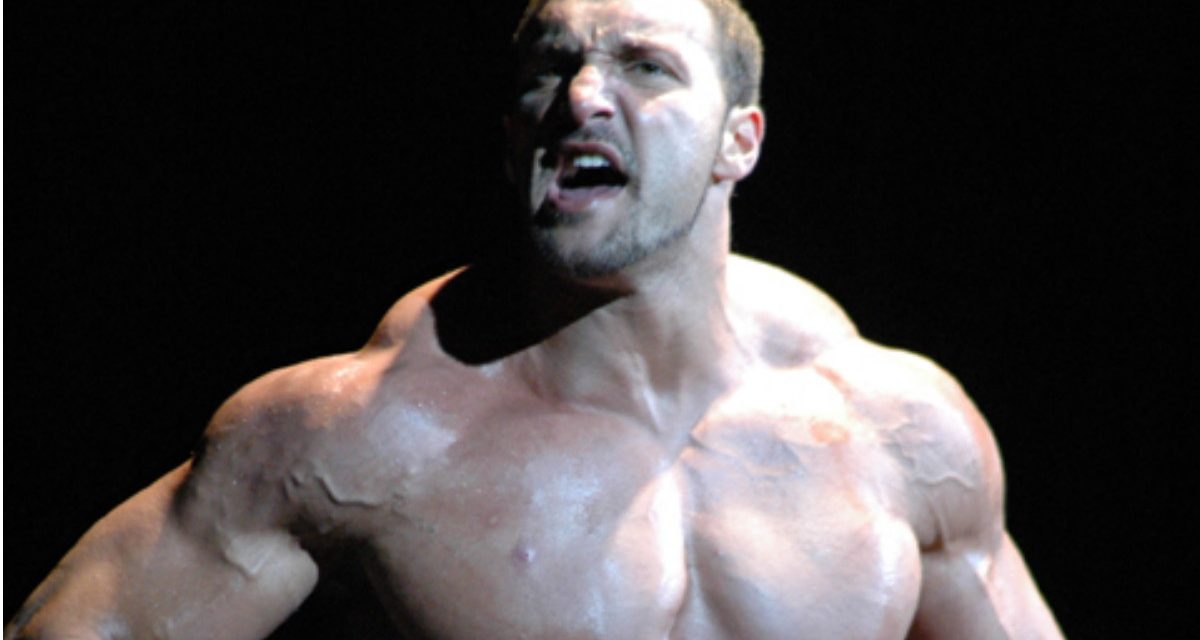 This weekend Chris Mordetzky, the former “Masterpiece” Chris Masters, takes part in Titans in Toronto III, his first time partaking in the event. SLAM! Wrestling’s Jason Clevett caught up with Chris on the phone from his home in Santa Monica, California to ask him your questions.

Q: You are participating in Titans in Toronto. As a member of the current generation of professional wrestling, what are your thoughts in participating in events that pay tribute to its history? [Jason Clevett]

A: I love doing events like this. I respect the history of the business and past generations. I had heard about Cauliflower Alley [Club] for years and was fortunate enough to check it out this year. Anything where you are paying respect to all these guys paved the way for the occupation I love to do and sparked a lot of the ideas we still use. I love it, simple as that. I am always open to doing events like this. 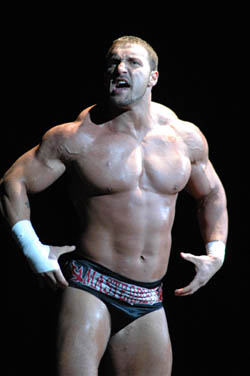 Chris Masters strikes a pose at a WWE house show in Hamilton, ON. Photo by Mike Mastrandrea

Q: What are you looking forward to the most this weekend — the wrestling show at The Galleria Mall (Dufferin & Dupont) on Saturday, or the Titans in Toronto III dinner? [Jason Clevett]

Q: Are you going to TNA or back to WWE? [Eva Sogoopeo, Josh Sluder]

A: It is the million dollar question, everybody asks me that. I don’t know if TNA is even an option right now to be honest. They are coming out here to L.A. next month and I would like to see some of my buddies. I have signed a one-year deal with Italian company NWE so most of my time is spent there. In between I am doing independent bookings in the United States.

Q: Where does someone as young as you go after having been in the WWE? [Adam Dykes]

A: I love wrestling, whether it is for WWE or not. After I was released I took three months off to heal an elbow I dislocated in my last match there on a tour of Europe. My mind was in the right place, I was more than ready to kick ass. Unfortunately I was released, s— happened, and at this point I just want to keep wrestling. I really enjoy it because I have a lot more freedom now. I do want to go back there eventually but I can enjoy wrestling a bit more now because I just work Saturday and Sunday and do some overseas tours for a couple weeks and that is enough to make a good living. I will be working in Spain for NWE at the end of October and we are looking at China in December.

Q: At the time of your release in November 2007, you seemed to be gaining some momentum; do you think WWE made a mistake by firing you at the point where you could have really become a major player? [Deepak]

A: I don’t know. I definitely question the results of the drug test. We had just come off that mass suspension and I don’t think anybody in their right mind was trying to come back to fail a drug test. I had my head on straight and really felt like I was in the game again. I was having really good matches on the European tour against Rey Mysterio and in tag matches against Undertaker and Kane.

Q: There was some controversy about the suspension of yourself, that lead to your dismissal, and D.H. Smith who was suspended at the same time. Many feel that in both cases you were used to “make an example of” and they held off any results until after November 1st when they started naming wellness policy violators. Do you feel this is the case for yourself? [Jason Clevett]

A: No, I don’t think so. Mine came out of nowhere. I know at that point the mindset was they were giving me another shot. Undertaker had specifically asked to work with me to see if I had it. I really was motivated, when you are in there with a guy you respect as much as The Undertaker you want to do business and rise to his level. So for me things were going great, I was clean — no question about that. I protested the system from the minute they called me in regards to failing the wellness test for a banned substance. But what can you do, they can’t go back on what they have. They said it was in my system.

Q: Any thoughts of how your character was used and booked? I always thought that if WWE created a solid heel stable and placed you as their enforcer, you could have gotten really over. [Deepak]

A: I think I could have gotten over from the very start when they were pushing me on RAW. It took me awhile to find myself but by the time they put me in an angle with Shawn [Michaels] and pushing me with top guys, at that timeframe in 2005 I was probably the second ranked heel on RAW. I remember we had the trip to Afghanistan and we all figured I was going to replace Kurt Angle because he got hurt. They salvaged the Masterlock and it started off good. I am not blaming the company by any means for how I was used because I caused some trouble and had my first suspension in, I think, 2006.

Q: When the Masterlock Challenge finally ended, and were you upset about the way it was handled. [Mark Xamin]

A: Not at all, I looked at it from a business standpoint. It is funny you mention that because I just talked to Bobby Lashley last week for the first time in a year and we were joking about it. I hear that a lot about Bobby breaking it.

Q:I went to Vegas for the Cauliflower Alley Club, but unfortunately missed the card due to my flight. I was fortunate enough to actually run into Nick Bockwinkel. I asked him how the card was, and how you did. He was very complimentary, and said you had a very good match. My question is: How important is it to you personally when a legend gives you a big thumbs up like that for work you did? [Sonny McDermott]

A:It means the world. Not many guys want to admit it in the business and maybe they are not, but me, I grew up a wrestling fan and loved it to death, and the biggest wrestling fans are the wrestlers because they take that crazy next step to become a wrestler. So I do appreciate anything that comes my way whether it was working someone who I see as a legend in the business or a simple compliment. I have gotten to meet a lot of legends, which is something that is one of the cool parts of not being in WWE, coming across people I never thought I would meet. Ken Patera refereed one of my matches. Bruno Sammartino saw one of my matches and complimented me on it. That was Bruno Sammartino — it means a lot!!!! 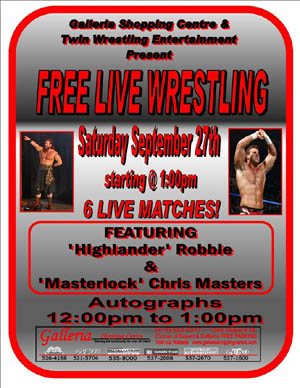 Q:How did the Masterpiece gimmick and name come about, who came up with it? [Ian Hamilton]

A: I was signed to my developmental contract and moved from Los Angeles to Louisville and I met Tom Pritchard. At the time he and Jim Cornette and Danny Davis were running the place, and Tom would come down and evaluate the talent. When I got there he said, “You aren’t Mordetzky anymore, you’re Masters.” I played Chris Masters for my duration in OVW. I was hanging out one night with some buddies down there, Matt Morgan who is now in TNA and Chris Cage, not Christian but Chris, who was one of the premier OVW talents under WWE contract and was unfortunately released before he got his chance to go up there. Matt Morgan just said, “what about Masterpiece?” It doesn’t take a brain surgeon to see it worked, a light bulb went off and I pitched it to Jimmy. We all felt good about it. I was already being stereotyped as a body guy, as much as I don’t like that. It gave me a ticket in the door but it sucks being compared to guys like Lex Luger. I do love the business and respect people and saw a lot of guys who were bodybuilders who decided they could be a wrestler. That isn’t my story, I wanted to be a wrestler when I went to the gym for the first time when I was 16 years old.

Q: From your time in the WWE what is your favorite memory? [Mike Wolf]

A: I have a few. Definitely working with HBK in the pay per view match. I definitely was in the ring with the best in-ring worker ever in my view, and one of the reasons I got into the business. Working Wrestlemania 22 in Chicago is definitely a highlight. Also the shows we did for the troops. I went to Afghanistan and Iraq and they were very rewarding experiences. I didn’t realize how much it would mean to the troops for us to come down there to be honest. To see their faces and how we took them out of their every day activities, it is like a relief for them and was one of the best things I have ever done.