Eugene makes U-turn back to training

In Ohio Valley Wrestling, Nick Dinsmore was one of the primary trainers of future stars like John Cena, Brock Lesnar, and Shelton Benjamin. Now that his own featured run as Eugene has ended in WWE, he finds himself back helping wrestlers out.

As a child growing up in Lexington, Kentucky, Dinsmore was a big wrestling fan, especially enjoying the action moves and the crowd interaction. Now as a wily veteran of the squared circle, he’s using opportunities — like an October 2 wrestling seminar in Barrie, Ontario — as a chance to pass some of his knowledge of the business to the next generation.

Considering Dinsmore helped mold many current WWE stars including John Cena, Brock Lesnar, and Shelton Benjamin during their days at Ohio Valley Wrestling, no one can deny his credentials. 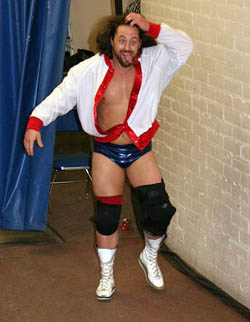 Eugene heads to the ring.

Dinsmore recalled it was not hard to see that those OVW alumni were extraordinary. “The ones like Lesnar, Cena, Shelton, those guys would pick up wrestling on the first drill,” explained Dinsmore to SLAM! Wrestling over the phone from Louisville, Kentucky. “The first time you showed them, they picked it up right away. Cena had a little bit of prior knowledge, he started in Los Angeles. It was just a limited knowledge that he had. When he came to Louisville, he learned so much, but his ability was the microphone skills and his backstage type presence.

“Brock was just a phenomenal athlete, Shelton was a great athlete. One of the other great ones was Rico Constantino who became Rico. He was very good. Victoria was also one that came from Los Angeles and she was very limited in what she knew and she became probably one of the best women wrestlers that WWE has and maybe the WWE has ever had.

“There were also handfuls of guys that thought they would come in, train for a couple of weeks and move on to TV and just never picked it up and ended up being released. We had a guy who was 7-1 and thought he was destined to be the best ever and he didn’t even make the cut. The ones that made it to TV, they definitely had something special. I could tell, and I also could tell the ones that didn’t get it, but I tried to help them all just the same.”

Dinsmore recalled some helpful advice given to him by a colleague. 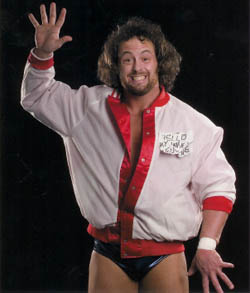 A positive attitude is the straw that stirs the drink. “I felt I probably would have gotten an easier ride if I was taller or bigger, but I always told people the cream rises to the top,” he said. “If you give a promoter no reason to deny you, and you’re overprepared when you go in, and you do everything you’re asked, there’s really no reason they can’t use you. Something that William Regal always told me was to eat different kinds of fruit in front of a mirror like sour fruits so you could see your face prune up to know when something is sour to work on your facials. You can cut promos in front of a mirror or if you have the luxury of videotaping yourself and watching it back. You can watch videos of past wrestling shows, pay-per-views. As long as you have someone there to kind of sit down and tell you, ‘This is a good match because of A, B and C’ or ‘This is not a good match because of A, B or C,’ — that’s what really helps.”

Nick Dinsmore will be conducting the wrestling seminar October 2 at the Army Navy Air Force Building located at 7 George St in Barrie, Ontario. There is still a limited amount of space available still for the seminar. Although space is running out quickly. Rates very depending on work experience.

Also that same day Nick Dinsmore and other NWF wrestlers will also be signing autographs at Icebox Collectables in the Kozlov Mall from 4:30 p.m. to 6 p.m. on October 2.

Tickets will be $15 for general admission. Tickets on sale now, and are available at Icebox Collectibles and OMG Games on Bell Farm Rd & Zombie Tattoo, at the 5 Points Plaza. Call 705-354-6288 for more information.