CHARLOTTE, N.C.- Sometimes, you don’t even have to close your eyes to imagine that you are living in a world of 25 years ago. You just have to listen.

Take Ivan Koloff, the “Russian Bear” and one of the most despised wrestling heels of his era:

“I never cheated. I did not cheat because I was superior! Americans could not keep up with me because Russians are superior athletes!” Koloff said as he dropped into character during induction into the Mid-Atlantic Hall of Heroes, on Friday, August 15th. 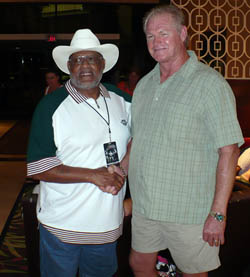 Thunderbolt Patterson and Robert Fuller were two of more than two dozen stars who signed hundreds of autographs at this past weekend’s fanfest in Charlotte, N.C. Photo by Steven Johnson

Or Wendi Weaver, accepting the induction for her father Johnny Weaver, perhaps the most popular wrestler in the history of the Carolinas, who died in February:

“This is my home,” she said. “Everybody here is family. Whether you be a fan who came up and asked for my dad’s autograph, and he gave it to you, or you were a wrestler who came to our house … he would be so humbled.”

Little wonder that there were few dry eyes among the 300 attendees as emcee Chris Cruise, a former World Championship Wrestling TV announcer, proclaimed: “Those are some of the moments we live for, frankly.”

The second annual Hall of Heroes banquet honored seven Mid-Atlantic legends from the heyday of Jim Crockett Promotions and was the hallmark of promoter Greg Price’s four-day NWA Legends Fanfest.

The dinner featured standing ovation after standing ovation as wrestlers paid tributes to old friends and fallen comrades. Rip Hawk recalled how he first met Weaver in 1957 and saw how he patterned himself after the legendary Sonny Myers, a fixture in the Kansas-Missouri area.

“He always had talent but he was just hidden,” Hawk said. “When he got here, he found his home.”

Weaver also was on the mind of Sandy Scott, the great Canadian tag team specialist who served in several key front office roles. Scott was humble and funny during his acceptance speech, which followed a tribute by TV announcer Bob Caudle, in recounting his handball-playing days in Charlotte with Weaver.

Ever competitive, Weaver saw an opening against an opponent, who happened to be a priest, and suggested Scott deliver a low ball in front of him. “The priest can’t stop, and he hits that wall and he breaks his ankle,” he said.

When they chanced upon the priest a few weeks later, the priest suggested the wrestlers played an underhanded trick. “Listen,” Scott recalled Weaver as saying, “if the good Lord had wanted you to stop, he would have had you stop.”

Michael P.S. Hayes and Jimmy Garvin gathered at the podium to induct Buddy Roberts, whom they called the essential link in their Fabulous Freebirds tag team, a three-man pairing that Cruise said brought rock-and-roll to wrestling before Hulk Hogan and songstress Cyndi Lauper.

“There is no doubt whatsoever the most valuable player of the Fabulous Freebirds was Buddy Jack Roberts,” declared Hayes, now a producer with the WWE. Roberts, who has successfully battled throat cancer, quietly proclaimed, “It’s like a family reunion for me.”

Magnum T.A. inducted Grizzly Smith, one-half of the famed Kentuckians tag team from the 1960s and a front office figure in the Mid-South promotion and in WCW. “He ended up being a mentor of mine in many ways as I started my career,” Magnum said.

Smith, who is in declining health and living with relatives in Amarillo, Texas, could not make the trip, but Sam Houston, a.k.a. his son Mike, said his dad would be pleased with the honor. “My dad really wanted to be here but it wasn’t one of his better days,” Houston said. “My dad’s got fond memories of you all, all the boys.”

And Paul Jones, inducted by ex-national Wrestling Alliance champion Jack Brisco, showed he had lost none of the wit he displayed when he first hit the Carolinas in the 1960s, but turned serious for a moment in discussing his recovery from prostrate cancer, urging men in the audience to get regular checkups.

The big draw of the four-day fanfest was unquestionably Ric Flair, whose presence led 300 fans to shell out $100 for a one-on-one, photo and autograph encounter with the Nature Boy.

Despite the price tag, fans were delighted to have the chance to meet Flair, who was making his first appearance at a fanfest in his hometown. He was one of more than 30 signers, who ranged from Rock “Mr. Wonderful” Riddle in full Hollywood-style garb to reliable midcarders like Tommy Angel, most of whom signed for some 400 VIP tickets holders, as well as other fans. 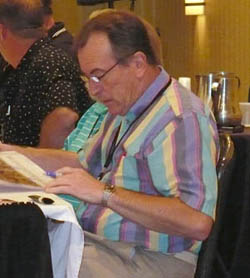 Other highlights of the weekend included a question-and-answer session with former WWWF champs Bruno Sammartino and Ivan Koloff. Though Sammartino was more associated with the Northeast than the Mid-Atlantic, he drew a large throng of fans for photos and autographs.

He also was effusive in his praise of Koloff, the man who ended his nearly eight-year run as WWWF champion in the middle of the ring in New York City’s Madison Square Garden more than 37 years ago.

Koloff, who spent most of the 1980s in the Carolinas, was designed to be a transitional title holder, keeping the belt just three weeks before dropping it to Pedro Morales. Without knocking Morales, Sammartino said WWWF owned Vincent J. McMahon, also known as Vince Sr., made a big-time blunder in giving Koloff such a short stint with the championship.

“That was one of the all-time mistakes by Vince McMahon Sr.,” said Sammartino, describing Koloff as a bull in the ring who could move like few other 300-pounders. By pushing Koloff at the height of the Cold War and in overseas countries like Japan, McMahon could have taken a major step toward furthering the interests of solid, credible wrestling and prosperous business practices, Sammartino said.

“All people had to do was look at him and they believed in him,” Sammartino said of Koloff. “If Vince had used good judgment, this guy here should have been champion for a good long while.”