WINNIPEG — As if an ambitious 5,600 kilometre tour through Northern Ontario into Saskatchewan wasn’t enough for the Blood, Sweat and Ears promotion — it had to go and add a Legend, a Knockout, a War Machine, and a couple of jokers from the Trailer Park Boys TV show.

Starting August 10th, and running until August 26, Blood, Sweat and Ears (BSE) will hit the road for one of the longest, most-ambitious tours since the days of Stampede Wrestling. 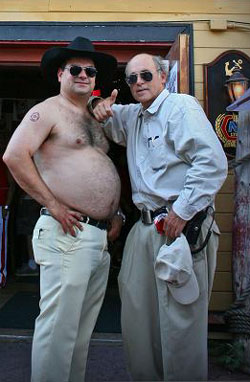 The biggest name on board for the whole tour is former WWE and TNA star Joe E. Legend, but TNA’s Traci Brooks and “The War Machine” Rhino are coming in for one night.

As for those Trailer Park Boys, Mr. Lahey and Randy will bring their own merry mayhem to the shows for a week, starting with the debut show in North Bay, ON, and departing at the following week’s Swift Current, SK, show.

Both he and Randy will put on their comedy show (including musical numbers) in the ring and host the BSE after party.

“A lot of people think that wrestling is rigged, right? But we know that that’s just not true. Randy and I both ended up in the hospital; he had a broken collar bone,” Dunsworth jokingly reminisced about a previous Halifax show the pair worked. “You know, we told the guys that we didn’t think that they could drink us under the table. And these guys, they fight hard and they drink hard. It’s unbelievable!”

Randy (a.k.a. Patrick Roach), who hoped the after party would include barbeque and then exhorted at length the nutritional advantages of cheeseburgers, noted he has had some previous wrestling experience.

“One time I did fight Bubbles, who played ‘The Green Bastard from Parts Unknown,’ and it was a tag team fight, and I think I won that fight fair and square, and I don’t care what anyone says,” he said, promising he would appear this time around under the alias “The Cholesterol Kid.”

The Swift Current show will also feature Brooks, who is expected to face off against another TNA Knockout, and Rhino, who will take on Legend.

Toronto-born Legend, who works oversees and lives in Germany, will join the tour August 15 and remain until the circuit’s final show.

“BSE has always been very professional when I’ve dealt with them,” said Legend, who has appeared on previous BSE tours. “And I’ll bet if you ask some of the other ‘fly-ins’ who’ve worked there — Christian Cage, Bobby Roode, Kurt Angle — I’m certain they’ll tell you the same.”

Legend lauded BSE’s strong under card, one he said has the freedom to shine.

“No one is told to ‘hold back’ early on to cover up a lazy main event. If you can’t top the last match, you shouldn’t be next.”

He is also looking forward to reconnecting with his old teammate Rhino. Both were members of the indy circuit’s Thug Life faction over a decade ago, a group that included Cage, Edge — then known as “Sexton Hardcastle” — and Bloody Bill Skullion.

“Seeing Rhino will be great as he’s one of my best friends — I was best man at his wedding in ’99 — and he makes me laugh,” Legend said. 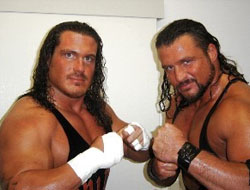 The old chums likely will not be discussing a possible return to TNA for Legend, who is flying back home right after the tour. Legend had stints, albeit unhappy ones (see: Joe E. Legend has a lot to say), with WWE and TNA.

“I doubt I’ll ask him to pull any strings at TNA for me: I’m doing just fine working all over the world without TNA taking a percentage off me. I’m booked as ‘World Champion’ in four strong regions — Japan, Russia, France, South Africa — so my exposure is just fine and my work is steady. I’m quite happy in Germany and a new father of twin boys so I have no desire to uproot them to the States; after getting screwed over by that totally unprofessional office, I threatened (Jeff) Jarrett and (Dutch) Mantel that I would ‘beat them to death at the first opportunity.’ I then curse them out. So I don’t think I’ll be working there anytime soon. But then again, why would I want to?”

BSE’s co-owner Arda Ocal said a prime motive behind the tour is to raise money to benefit the United Way.

“In our home town of Brampton (Ontario), we are connected with the Brampton Neighbourhood Resource Centre, which is a registered United Way charity. Each year BNRC is required to perform three months of fundraising for the United Way,” he said, explaining that money flows to the national United Way. “This year, our tour will be a major part of their fundraising.”

He would not speculate as to how much money the tour might generate or the amount that could end up in the United Way’s hands.

“I would love to be able to say that we gave thousands of dollars to the United Way through BNRC. That can certainly happen.”

Everything will depend on offsetting what are surely to be significant trip expenses.

A ring truck and a 12-seat cube van that will carry many of the wrestlers will cover the 5,600 kilometre roundtrip excursion. Legend will be flown in from Germany, Rhino from Detroit and Brooks from Tampa. 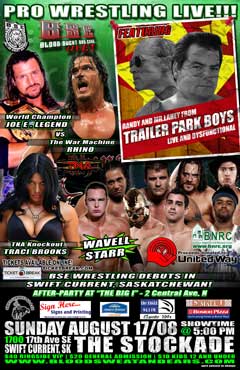 “In any budget, wrestling or not, you are always conservative. Particularly in this case with the recent attendance figures out west,” Ocal said, adding he is assuming a $1.50 per litre gas price. “If you stay realistic in your budgets and make sure that you don’t leave anything to chance, you will be able to deem your endeavour successful.”

He did not answer questions about sponsors, except to say BSE’s affiliation with the United Way has not helped procure any.

“The reason we’re doing it is because we pride ourselves on doing good in the communities, like we have done in Iqaluit, Timmins (also in Ontario), and here in Brampton. This time we’re expanding it to a national level.”

Ocal said in the days leading up to BSE’s Iqaluit, Nunavut shows, he and several of the wrestlers visited a youth corrections centre, held assemblies at various schools, and visited underprivileged youth for traditional meals and games.

At its Brampton events, typically 15-20 “troubled youth” receive free tickets and get to meet and greet wrestlers at a pre-show pizza party, Ocal said.

No Manitoba date for the tour has been set yet, but Ocal said his group is trying for a Winnipeg event Monday, August 18.

“The biggest issue is making sure that a physical local presence is in place to promote the shows. I am a Rotarian here in Brampton, so part of my strategy has been to contact local Rotary Clubs to support the events in their towns — I’m trying the same for Winnipeg.”