A run through the career of Kiwi/Sheepherder/Bushwacker Luke

It is rare that a wrestler can legitimately beat up the children of a promoter and end up becoming the top draw in the territory.

Luke Williams achieved this unique distinction while working for Stampede Wrestling in the 1970s. 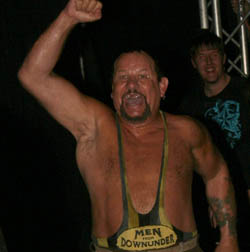 Bushwacker Luke at a July 2008 Ring of Honor show in Detroit. Photo by Chris Schramm

“I was working our first tag-team match for Stu Hart as the Kiwis,” he recalled for SLAM! Wrestling. “We ended up being disqualified when Abdullah came out and started throwing a couple of young kids into the ring. My partner and I weren’t sure who these kids were so we just kicked them out of the ring. Once we got backstage, Stu Hart gave us hell for beating up his kids!”

Luckily for Williams, Stu Hart did not hold a grudge and the Kiwis became one of the top tag teams. Williams has some fond memories of working the Stampede territory. “Stu used to have us over for dinner every Sunday. Stu would invite young guys downstairs to the Dungeon to show them moves and stretch them. He never did that on me so I always had a nice time at the Hart House.”

One not-so-fond memory for Williams were the freezing prairie winters. “I remember coming out of shows in Saskatoon and Regina. Basically, I froze my balls off before even stepping outside the door. Just imagine a sweaty wrestler going into °30C weather. Not a pleasant thing.”

While Williams worked with many top names during his time with Stampede, he cites one wrestler as being extraordinary. “I worked with Dynamite Kid in 1979. It was amazing to see him leap off the top of a steel cage just like Jimmy ‘Superfly’ Snuka. I used to call Dynamite the Rocket. I had a chance to visit Dynamite five years ago and it was sad to see him in the wheelchair. He was one of the greatest wrestlers in his time.” 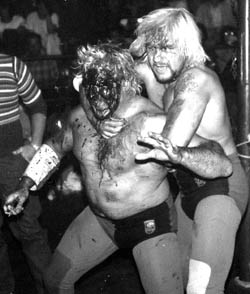 Luke Williams and his partner, Butch Millar, did not only make an impression in Stampede wrestling. They worked some high-profile matches against Roddy Piper and Rick Martel for Don Owen in the Portland territory. They also changed their names from the Kiwis to the Sheepherders. “I remember working a steel cage tag match against Piper and Martel in Vancouver. Piper screwed up the ring entrance as he climbed to the top of the steel cage and fell off. Piper did have the gift of the gab. He was amazing with the stick (microphone).”

Millar and Williams also were successful in the larger promotions. “We went to go work for Jim Crockett in 1980. He put the Mid-Atlantic title belt on us. We made a mistake when we jumped to Puerto Rico in 1981. We didn’t understand the draw of Turner Cable TBS. It was another six years before Crockett booked us again.”

Millar and Williams gained their reputation as a hardcore wrestlers while working in Puerto Rico and later for Bill Watts in the UWF. “The fans in Puerto Rico have always been very passionate,” explained Williams. “We developed matches like fire, barbed wire, and chain matches that catered to those fans. It drew a lot of people and was great business. Butch and I were hardcore before hardcore was even a brand.” 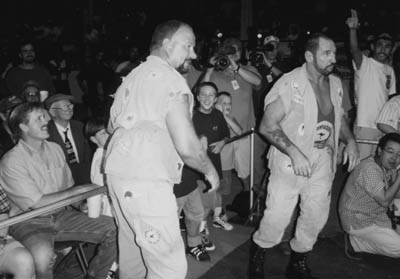 The Bushwackers in the WWF. Photo by Mike Lano, [email protected]

Some wrestling fans feel the Sheepherders sold out when they entered the WWF as the Bushwackers in 1988. Williams and Millar became better known for crazy antics like licking people than for hardcore matches. Williams does not regret his time at all with the WWF. “Vince always treated us well. It is true we became almost more like a Three Stooges comedy routine but it entertained people and made them happy. I would have elderly people coming up to me in the airport saying they enjoyed watching us with their grandchildren. Also, the bottom line was that we had to go to where we could make money. The WWF sold a ton of merchandise and we did well for ourselves.”

In 1997, Williams moved away from the glare of the spotlight of the WWF and eventually worked as the talent coordinator for IWA wrestling in Puerto Rico. “I ended up moving to San Juan and got involved with the IWA. We had a lot of former names from the WWF and TNA come wrestle for us. One of the guys who came through was Devon Nicholson from Ottawa.”

The circle is complete now that Nicholson has Williams booked on a series of shows in Ontario — August 6th, in St. Catharines, ON; August 7th, in Hawkesbury, ON; August 8th, in Ottawa, ON; and August 9th, in Kingston, ON..

It was Williams who ended up giving Nicholson the name Hannibal. Nicholson is thankful that Williams had a hand in choosing his name.

“I met Luke when I was working for IWA. He was a booker there. He brought me in after I sent him a tape,” said Nicholson. “I was going by a ridiculous name Bruce Hart had given me at the time, Kid Nichols. It didn’t suit me at all and Luke hated it. After watching me wrestle on tape, he said my facial expressions and vicious style reminded him of Hannibal Lector. When I came to Puerto Rico, my new name would be Hannibal. I hated the name I was being forced to use in Stampede and agreed that Luke’s name was more fitting so I kept it.”

Williams’ relationship with IWA ended in 2007. Since then, he has wrestled for a legends tour and independent dates across North America.

Williams had one parting comment for Ontario wrestling fans. “Let everyone know if they come to the show. I will guarantee for my opponents I’m going to kick ’em and for the fans, I’m going to lick ’em.”