UNIONDALE, NY – For the first time since the 1990s, the Ultimate Warrior did an autograph signing or an appearance in which he dressed up in his traditional ring gear. Fans came from all over to meet one of their favorite wrestlers, and take a picture as they once remembered him from years past. 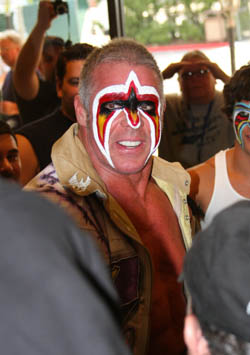 The event took place at the Marriot hotel in Uniondale, NY. As it seems these days when speaking about the Warrior — his legal name — controversy isn’t too far behind. The signing took place not only on the same day as the WWE’s Great American Bash PPV event, but it also took place a stone’s throw away from the venue. The line began forming around 10 a.m. with a few fans, some bearing Warrior face paint. By noon the line had grown to about 130 people. Kids, as well as adults, stood as they eagerly awaited the doors to open.

As everyone waited in the unorganized line in the back part of the Marriot, there was one event that happened which surprised some people. Bruno Lauer, better known to some as Harvey Wippleman who now serves as a RAW road agent, arrived without notice and hung up a cease and desist letter from the WWE. The papers were hung up for everyone to read amidst the line of fans. To summarize the papers — Warrior and WWE have no connection to each other, and that the Warrior is just using the attention and name of the WWE to attract fans into his signing. It also made mention to the belt in which the Warrior was advertising he would be posing with. Since the title was intellectual property belonging to the WWE, the Warrior could not pose or even market himself posing with it. 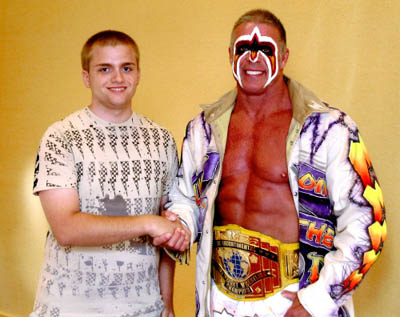 A young fan and the Warrior pose. Photo by Bruno Silveira, TopRopePhotography.com

The Warrior arrived at 2:13 p.m. through the back section of the hotel and shook hands with several fans as he made his way through the awaiting line to the room where the signing was to take place. Warrior wore his traditional face paint, duster, and wore the yellow WWF Intercontinental title from the ’90s. A closer look at the belt would have this writer believe this was the original belt that was used inside the WWF ring because of the condition of the gold and yellow leather.

The Warrior was signing anything for $55; this included any pictures of the Warrior, DVDs, and belts. For $90 one could get a professionally taken photograph by a backdrop, have it printed up immediately afterwards and have it signed by the Warrior. Most people, however, took advantage of getting pictures taken with their own camera as opposed to paying the $90 charge for the professional picture. The event seemed to have run pretty well as far as a fan’s point of few is concerned. This event will be remembered for a long time by all of the Warrior fans who attended.