Wrestler “Old School” Chris Wayne may be semi-retired, but his out-of-ring alter ego Chris Hennigar is by no means finished with the business he has adored since childhood.

Hennigar fell in love with the sport in the 1980s, growing up with Stampede Wrestling, the National Wrestling Alliance, and stacks of Pro Wrestling Illustrated magazines.

“Watching the Stampede guys from Chris Benoit to The Cuban Assassin, Bret Hart to Duke Myers, they were all so believable. And when my family finally got cable TV and I was introduced to TBS and the NWA — my God, the crowd reaction to the Rock ’n’ Roll Express and the sheer and utter hatred everyone had for the Four Horsemen, I was hooked,” Hennigar told SLAM! Wrestling. 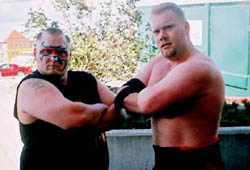 Although he had notions of one day becoming a wrestler himself, it would not be until he was 25 that he actually went and pursued his dream. In July 1997, Hennigar went down to Lima, Ohio and trained for two-and-a-half months under Al Snow at BodySlammers. Calling it the greatest experience of his life, he also confessed it was a grueling one at the time.

“I called home probably once a week looking for my folks to send me airfare home because I thought I couldn’t take it,” he admitted. “But after my body got used to the constant bumps and I started to learn, there was no way anyone would have ever gotten me out of there except in a body bag.”

Looking back, Hennigar said he can appreciate the fact the instructors required each student to perfectly execute every bump and drill before moving on. “It made us a tight group, working together on our days off just to get things down. It was an experience I wish everyone could go through.”

His first match at a small, private outdoor show in Cleveland that a father bought for his kid’s birthday party would also be memorable, but for all the wrong reasons.

“Me and three other trainees worked in a tag team match and then a battle royal at the end. Well, in the battle royal one of this guy’s friends spun me around and the next thing I know the ground is coming up quickly.”

The untrained guest had joined the melee and poorly executed a DDT on Hennigar, who not surprisingly got hurt. But without medical insurance and no other obvious alternatives, one of the wrestlers popped his apparently dislocated shoulder back into place.

“We drove the three hours back to Lima and waited for a week until our next show. That entire week was agonizing. I had to keep working out to try and keep crisp and I had to keep taking bumps and it was killing me.”

Hennigar worked his next scheduled show but soon found himself unable to keep wrestling with his injury. Flat broke, he called home and got a plane ticket to Grande Prairie, Alberta.

Nearly a year of inactivity passed before Hennigar got in touch with Vance Nevada, who helped him get booked in Winnipeg. Thereafter, he found himself wrestling as Chris Wayne across the Prairie indy wrestling circuit. 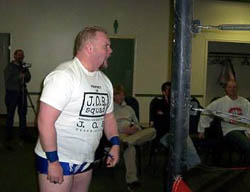 “Old School” Chris Wayne mouths off to the fans.

“Not only is (Nevada) a consummate professional, but he has opened doors for me and helped me out more than I could ever thank him,” Hennigar said. “Without Vance Nevada, I would have never stepped in a wrestling ring again when I got home from the States.”

“At this time I had been in the business about three years. Looking back I probably jumped into the training thing a little too quickly but I was confident I could teach all of our guys the basic fundamentals,” he said, “and then by pairing them with vets in the ring they could learn as they went, so to speak.”

O’Keefe had high praise for Hennigar. “As a performer, I can’t say enough about Chris’ mind for the game, and his desire to give his best every single time, and he really tried to make the students realize the importance of that as well,” the CCW promoter said.

O’Keefe believed Hennigar would have found steady work as a good hand during the former territory days. But by choosing to live in Lloydminster, which mandated prolonged travel to work shows, in addition to choosing family over wrestling, Hennigar did not advance as far as perhaps he could have, he said.

Hennigar lost his CCW job when O’Keefe could no longer afford to keep the company afloat by himself. O’Keefe chose to hand the booking and training to another performer, one who not only lived closer to Edmonton but also shouldered some of the financial burden. (CCW closed down not long after O’Keefe’s alterations.)

“I probably wouldn’t have accomplished the CCW start-up without Chris,” he said, adding the company would have shut down sooner if not for Hennigar’s involvement.

A SHOT AT PROMOTING

A steady, regular job and starting a family with his wife have limited Hennigar’s in-ring appearances and he has gone into semi-retirement during the last couple of years, appearing only maybe five or six times a year.

“I’m 36 so my body is breaking down a little bit, the shoulder still acts up, and it gets harder and harder to get time off of work the deeper I get in my career,” he said. “Wrestling is still one of my passions — I still follow the local guys, I still buy the magazines, and my DVD collection keeps growing, much to the chagrin of my wife.” 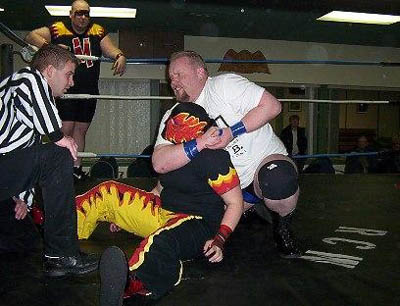 Conceding his active in-ring career days were numbered, Hennigar decided to take a shot at promoting and has since created Western Canadian Championship Wrestling (WCCW). His involvement is a mix of events and talent coordinating while partner Dave Mercer takes care of venue location, marketing and press releases.

In an attempt to steer away from the skit-heavy wrestling on TV, Hennigar said he aims to make WCCW a family friendly, traditional wrestling show. Wrestlers appearing at WCCW shows are required to meet and mingle with fans, sign autographs, and have their photos taken.

The promotion has only run twice, and Hennigar admits it is still in the “baby steps stage.”

“As a promoter, I would like to eventually run a minimum of one show a month,” he said. “Right now we are trying to stay in small town Alberta, but eventually we need to grow in order to improve our product.”

WCCW has worked with charities and has raised over $1,000 for the Canadian Cystic Fibrosis Fund and over $600 for the Heart and Stroke Fund of Alberta.

“The locker room is a great learning environment because opposed to the 10 new guys to every two vets in most locker rooms today, it’s the opposite,” T-Bone said. “A lot of the guys there have been around the business for a long time, like Vance Nevada, Andy Anderson and Mauler.”

Headlining the events is Adrian Walls, whom Hennigar has known since 2000.

“Adrian Walls, who I have traveled more miles with than anyone else in the business, have wrestled with and against, is the current WCCW champ and I am proud to call him my friend,” Henniger said.

Walls said he counted Wayne among those who “really helped a lot in the early days, getting me lots of bookings.”

“I can’t express enough appreciation for that.”