After my whirlwind two-day trip that took me from New York to Texas and back, I had a welcome day off, which I spent in Syracuse visiting with some friends from Squared Circle Wrestling (2CW) and seeing the new Indiana Jones movie, which had just come out that weekend.

The next day, I flew to Tampa for a five-day stay. I had wrestled in Florida only once before, having driven to Tampa from Louisiana, where I had wrestled the two nights before. While my previous trip to Florida had been somewhat marred by my strange Louisiana-borne respiratory illness, as well as the knowledge that we had an 11-hour drive back to Nashville, I was determined that this trip to Florida would be more enjoyable and relatively stress-free.

After arriving on Tuesday night, we had a day of SlamminLadies tapings ahead of us on Wednesday. Wrestling for SlamminLadies is always a great experience, as it often gives me the opportunity to wrestle people I haven’t previously had the chance to. On this outing I got the opportunity to wrestle Amazing Kong for the first time, as well as try my hand at refereeing, which I hadn’t attempted since one of my first shows at age sixteen.

Following our Wednesday tapings, I tagged along for Rain’s photoshoot in Clearwater, which is among Labrador and my home as one of my top three favourite places in the world (yes, the entire world). I spent most of the afternoon relaxing on Clearwater Beach while dog-sitting Rain’s pug, Colin, before wrapping up the evening with the best popcorn shrimp ever at Crabby Joe’s.

As someone whose “morning workout” begins at noon, mornings aren’t something I usually take part in voluntarily, but Thursday morning I was up bright and early to head to Universal Studios, one of the few places I would willingly get up early for. Without staying off the topic of wrestling for too long, I do have to note that the new Simpsons ride is absolutely awesome. After riding I believe every ride in the park — but boycotting Terminator due to its immense crappiness — we headed back to Tampa and got ready for our weekend shows.

It was time to work again on Friday, as I headed up to Crystal River for my Full Impact Pro debut. I managed the YRR in two tag team matches that night, first managing Jason Blade & Kenny King against Jimmy Jacobs & Tyler Black, and then managing Sal Rinauro & Chasyn Rance against Delirious & Scotty 2 Hotty. I had a lot of fun managing, as, aside from a few matches during my brief pairings with Cody Deaner and Zack Storm, I hadn’t managed since I was a part of Now Playing in Ottawa’s Universal Wrestling Alliance over three years ago.

Saturday night I was in Arcadia, again for Full Impact Pro, and this night was teaming with a Florida-based wrestler, Mimi, to take on Rain and Leva. Daizee Haze was our special referee, complete with a straw hat that I think really completed the look. Despite our team coming up on the losing end of things, I escaped the weekend injury-free and happy with my outings. 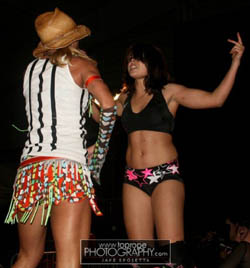 I made my way back to Tampa eager to get some sleep before my early-morning flight. I dreaded my layover at JFK, which I believe to be the most disorganized airport in the world. After the inevitable delaying, undelaying, and redelaying of my connecting flight (I’m not making this up), I finally managed to catch my short flight back to Syracuse, and arrived for a much-needed five days at home before heading off to my next show.

I will be leaving Tuesday, July 22, for the inaugural Maritime tour of Ultimate Championship Wrestling, a new company based out of Prince Edward Island. The five-day tour will take us through parts of PEI and Nova Scotia, and will feature Honky Tonk Man, Pierre Carl Ouelette, and “Kowboy” Mike Hughes. For more information, please visit www.ultimatecw.org. A column about the tour will be posted after I return.