TORONTO – The popularity of mixed martial arts has never been lost on TNA Wrestling. Indeed, the company has a long history of working with MMA stars, from Ken Shamrock

Frank Trigg was originally brought in to provide expert analysis for the MMA-style match between Kurt Angle and Samoa Joe that took place at the Lockdown pay-per-view in April. 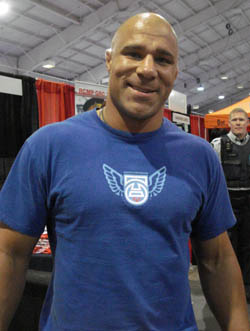 Frank Trigg in Toronto on Saturday. Photo by Bob Kapur

“They wanted a legit commentator who would be able to talk about it a little better than Mike Tenay and Don West would be able to,” he explained. “They asked if I would come in, and I said ‘Of course I will’.”

The role wasn’t new for Trigg — he played a similar role for PRIDE Fighting Championship — and apparently his efforts impressed the right people, as he has become a regular on TNA programming since then. As part of the Angle Alliance, Trigg is embroiled in the storyline pitting Angle against A.J. Styles. On last week’s episode, Styles attacked Trigg in the parking lot, thinking he was Angle. Later in the show, Trigg exacted some revenge, distracting Styles and leaving him prone to a sneak-attack by Angle.

Whether or not this ultimately builds to a match between Styles and Trigg remains to be seen. For his part, Trigg would relish the opportunity to enter into the six-sided ring.

“Hopefully, in the next two weeks or so, you might see me do (that),” he teased. “I hope so, but who knows. I’m trying to convince Jeff Jarrett and Dixie Carter to keep me around longer, but it’s up to them.”

Though he did note that much of that will depend on whether he can successfully translate his MMA skills into pro wrestling.

“Right now,” he said, “we’re trying to figure out if I can actually do the job (in the ring). It’s easy to talk about it, but to be able to get inside the ring and do it, that’s a different question.”

Either way, Trigg is glad to be working with TNA, if only to reach out to a wider audience than Trigg has traditionally played to as an MMA star.

“There are a lot more wrestling fans than pro wrestling fans,” he observed. “Wrestling has a demographic that MMA can’t hit. In wrestling, you’ll have a 45-year old dad and his 12-year old son, and they’ll be arguing about (a match), and they’ll both be educated about both wrestlers and the rivalry (between them).”

“But in MMA,” he continued, “it might be that the dad gets it, and the 12-year old son might have his favourite, but they don’t quite have an understanding about both of the fighters. (MMA has focused on the) 18 to 34 year olds — but wrestling has the 12 to 55 year olds. The fathers and sons, the mothers and daughters. To reach that entire demographic, that’s really something, and that’s what I want to do. Hopefully, I’ll be around a while longer so I can do that.”