Great Kusatsu would often become a side note to wrestling historians when discussing Wahoo McDaniel’s Indian strap match record. McDaniel who is often said to be undefeated in the specialty match, actually fell to Kusatsu in the first-ever Japanese promoted Indian strap match in 1973. Kusatsu was known as a staple of the IWE promotion in Japan during the 1970s, where many note as the birthplace of hardcore wrestling.

Masatake Kusatsu, who was known in the ring as Great Kusatsu, died Saturday in Japan from esophageal cancer. He was 66. He was in and out of surgeries for the last year, stemming from the spread of cancer into his liver and lungs in May of 2007.

A well respected rugby player, including a stint on the Japan National Team, Kusatsu began training as a professional wrestler in 1965.

Kusatsu debuted for the JWA promotion (started by the late Rikidozan) March 21, 1966 to much fanfare. At the time of Kusatsu’s debut, Antonio Inoki had left while Giant Baba was the top star of the league. Inoki would return to the JWA in 1967, but by that time Kusatsu was wrestling for the IWE. Kusatsu had problems with some of those running the JWA and quit the promotion just a few months after making his debut. 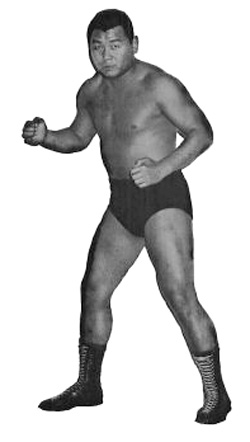 The IWE was a start-up promotion which struggled when they opened in October of 1966 because they lacked a television deal. Isao Yoshiwara, who owned the promotion, sold most of the rights to Tokyo Broadcasting System (TBS), who was able to give the promotion that much needed television exposure.

TBS, which was unfamiliar with wrestling, made poor choices when it took over, causing Japanese wrestling legend Hiro Matsuda to leave the promotion. After many problems for the initial two years of the promotion, the IWE crowned their first IWE World Heavyweight champion in 1968 when Billy Robinson won a tournament.

A January 1968 match with Lou Thesz could have turned Great Kusatsu into a major star, but it was a match that haunted him the rest of his career. During the match with the the TWWA World Champion, Kusatsu was accidentally knocked unconscious, the match ended, and Kusatsu was never looked at as a serious main event star again.

Struggling since his embarrassing loss to Thesz, Kusatsu was put into a tag team with Thunder Sugiyama. The team was able to win the IWE Tag Team titles, defeating Monster Roussimoff and Michael Nador on January 18, 1970. Monster Roussimoff would go onto to become one of the biggest draws in wrestling history as Andre the Giant. Roussimoff first gained large exposure to North American during a long tour of Japan starting in January 1970. The IWE Tag Team titles would be the first title that Roussimoff would win during his career.

Kusatsu would capture the tag team titles numerous times over the years with various partners including Mighty Inoue, Animal Hamaguchi and his most popular choice Rusher Kimura.

In a pairing that many saw as the first strong connection between North America and Japan came when the IWE and American Wrestling Association in the U.S. began a working deal that included the exchange of talent during most of the 1970s.

The deal gave Billy Robinson and Monster Roussimoff a chance to wrestle in the United States, where they would go onto to greater fame. It also gave Kusatsu the chance at AWA World Heavyweight champion Verne Gagne, who defeated Kusatsu twice in February 1970 in Japan.

The deal allowed Kusatsu to visit North America for the first time in 1971, wrestling for the AWA. Strong Kobayashi joined Kusatsu during his North American tour, facing Gagne in larger cities like Chicago, Minneapolis and Denver while Kusatsu faced Gagne in smaller cities like Omaha, Neb. The tour from the IWE was possibly the first time an American Heavyweight champion defended the title in the U.S. against established Japanese talent. It was an opportunity to show the American fans the true meaning of a “World Title.”

IWE was the first Japanese promotion to introduce special stipulations into their matches. They are credited for many firsts in Japanese wrestling including a chain match, hair match, strap match and cage match. They often promoted these matches as “death matches”, a term that would would be used widely in Japan in the 1990s by promotions like Big Japan and FMW. The IWE is also often credited for popularizing musical entrances in the world of wrestling, before Mil Mascaras in Japan and the Freebirds in the United States made it famous.

On November 28, 1973 at the Culture Gym, Kusatsu defeated McDaniel in that match. The brawl was remembered to be stiff and bloody, which went against most Japanese wrestling traditions.

The closest Kusatsu was ever able to coming close to capturing the IWE World Heavyweight title came on June 3, 1974 when Billy Robinson defeated him in the finals of a tournament for the vacant title.

Thesz and Kasatsu would face each other again on October 6, 1979. Thesz and partner Nick Bockwinkel defeated Kasatsu and partner Rusher Kimura in a match seen as the last main event Lou Thesz would wrestle. The match was also one of the last IWE shows that AWA talent wrestled on.

Kusatsu was recovering from a torn Achilles tendon that he suffered in late 1980 when the IWE closed its doors in 1981. With little options, including much wear on his body, Kusatsu retired from the ring. He spent most of his later years in sales but did return as a commentator for the short-lived SWS promotion, run by Genichiro Tenryu, in the early 1990s.

Kasatsu’s son, Kenji, would take his father’s name, as working Great Kusatsa, while doing mixed-martial arts for K-1 from 2000-2004. Working as a heavyweight, he never really gained much momentum, and ended his K-1 career with a 6-9-1 record.