Honkytonk Man shoot quite possibly the best interview ever

The Honkytonk Man holds nothing back in his YouShoot interview from Kayfabe Commentaries. And that’s an understatement. 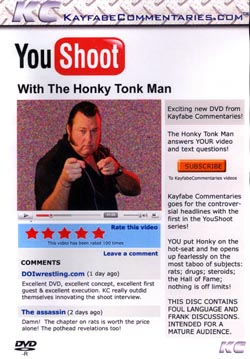 The self-proclaimed greatest Intercontinental champion of all-time yammers on about Vince McMahon, the WWE Hall of Fame, pay, rats, ring wardrobe, his I-C title run and theme music all while dropping curse word after curse word that only adds to this epic shoot interview.

What makes this interview unique is that all questions posed to Honkytonk are from fans (hence the “You” in YouShoot) via email and video. Honkytonk never misses a beat and answers each question straight-up and honestly. He even mocks the late Sherri Martel, Bret Hart, Shawn Michaels and homosexuals, saying the latter is good for a b–w job now and then. How nice.

And that’s just one of many comments Honky provides in this interview labeled “for mature audiences only.” Yeah? Sailors couldn’t sit through this entire DVD.

Kayfabe Commentaries co-owner Sean Oliver moderates the interview and rarely interjects himself to interrupt Honkytonk only to provide factual information and read the questions.

“The (YouShoot) series is a next generation answer to the shoot-style interview… the shoot on Creatine, maybe,” Oliver said. “Of our three series (Guest Booker, My Side of the Story, YouShoot), YouShoot is the more irreverent, loose show. When you turn the interview over to the public and allow them to grill the most provocative figures in the business, you’ve got a recipe there for outrageousness.

“Honkytonk Man was the logical choice for the series premiere. He’s shoot interview gold and has filled the prerequisites for this series — he’ll answer anything, he’ll answer it honestly, and he’s got balls. The same can be said for our two subsequent guests Missy Hyatt and The Sandman.”

Nothing is off-limits in this interview and some of the stories Honky tells (and in great detail) are nothing short of engaging, entertaining and even ridiculous. When he rambles on about “rats” (wrestling sex dolls, groupies), good Lord, watch out.

It’s hard to give a solid review of this DVD without giving away any of the stories Honkytonk Man dishes. All the rants are that good. The fast-forward button on your DVD player will not be touched, but the rewind key may get overused as the viewer is constantly in the state of “Oh my! Did he just say what I think he said?”

Yep. He did. And then some.

However you scrounge up the dough, if you are reading this review right now, find a way to get this shoot interview. You will not be let down.