By now collectors know what to expect when they pop open a pack or a box of Topps Chrome. The collation is always a bit off and the cards have that curl, especially if you leave them out for an extended period of time, but they always have a dramatic look and this edition of the Heritage series is no exception. It offers WWE collectors some terrific insert cards, autographs and various versions of the word “fractor.”

Wrestling cards of yesteryear were generally pretty generic cardboard cards with some modest looking photography. In a way, when these Heritage sets come out they do a great job of re-writing the past since many of those wrestlers competed in the WWE or WWF or WWWF back in the day.

Once again the photography is terrific and in case the average collector doesn’t realize this, wrestling images from the past are hard to come by. It’s not like there was a Getty Images back then so there was maybe one or two photographers that were ringside once in a while. So anytime I see terrific shots of wrestlers in their prime, or something close to that, it makes me smile.

This year’s set has a 10-card Allen and Ginter subset (cards with special lettering, outside of the base set, which complements the 90-card shell set), and I managed to snag nine of the ten in my box, missing only #5 (Shawn Michaels). A standout for me was Chief Jay Strongbow. Other than Chief Wahoo McDaniel I can’t think of a better wrestler with the same gimmick. Let’s face it — like most wrestlers he was a good actor for an Italian guy from New Jersey! All in all he was a great tag team wrestler something that is quickly fading away from the current WWE roster. 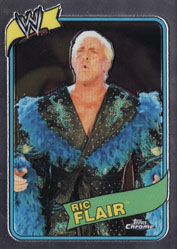 My autograph was from current WWE superstar Carlito. Carlos Colon Jr. is a second-generation superstar so why not sign with that name? If it was me, I would have; but he decided to stay in character and although the card looks good, the glamour shot of his robust face could have been replaced with an action shot of him spitting his trademark apple. C’mon, it would add something to the card. There are supposed to be 16 different autographs in this series.

My favorite base card was that of Ric Flair. He has always been one of my favorite wrestlers and this card has him looking as good as a man of 59 years of age whose face has been tossed around the squared circle for over 30 years can! The card backs of this set are informative and the blue background looks good but the thumbnail photos are mostly pixelated. Torrie Wilson will soon be off the Diva list so does that mean she will be put in the subsets as one of the “original Divas?”

The company’s old logo is in this set and there are some classic Topps card ’80s designs on display in this release.

It still makes me sad to see cards of deceased wrestlers like Earthquake, Brian Pillman, and Bam Bam Bigelow to name a few. These cards keep their names alive and that’s a good thing.

This set is a must-buy for collectors (it sells for $55-65) and for once the Divas didn’t carry the set. I like them as much as the next guy but this series is carried by the Superstars autographs and the Allen and Ginter subset.

Russ Cohen, the producer of Card Corner, is a longtime wrestling fan from the northeast.