AMSTERDAM, NY – With his booming voice, and heartfelt message, “Big Thunder” Gene Kiniski was the proper inductee to close the ceremony for the seventh annual Pro Wrestling Hall of Fame Saturday night. 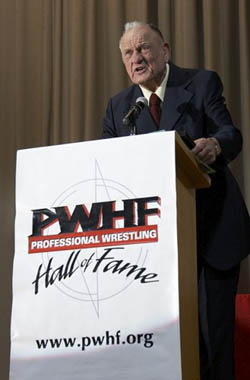 Kiniski, inducted into the Television Era, stood in front of the gathered crowd of fans, wrestlers, friends and family at the St. Mary’s Institute, and said thanks on behalf of his entire industry.

“The oldest profession in the world is the art of deceiving yourself. I am not going to deceive myself this evening,” started Kiniski. “The reason that I’m here standing in front of you is because of my peers, and because of the people who made it all possible, wrestling fans. Without you, we wouldn’t be here. Thanks for making my life so special, so enjoyable.” 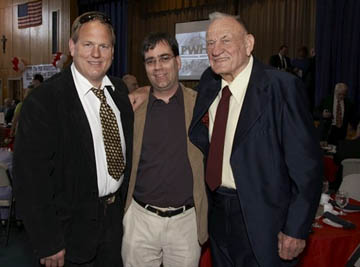 The former NWA and AWA world champion was accompanied for the weekend by his son, Nick, who had his own wrestling career (since revived in many fans’ memories by the reruns of the late ’80s AWA broadcasts on ESPN Classic). His father couldn’t resist telling a story about Nick.

“He was in the process of making a wrestling ring. I said, ‘Nicky, why are you making a ring outside your bedroom? What for, son?’

“He said, ‘Dad, if something ever happened to you, I’m not going to call 911. I’m going to throw you in a wrestling ring. I know you’ll be good for 60 minutes!”

The cute story probably drew the biggest laughs and applause of the rather sedate evening.

Lacking the two other living men’s inductees, both from the Modern Division — Bret “Hitman” Hart and Bob Backlund — the evening sailed along without many hiccups or problems, but also lacking a ton of colour. Even the host for the evening, Doink the Clown (Ray Appollo Licameli, in full makeup), seemed to be reined in, professional in lieu of mirth. 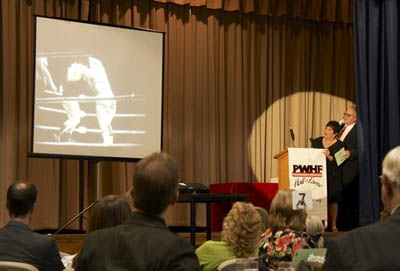 In the Women’s Division, Betty Jo (Niccoli) Sato, was the sole inductee. Introduced by J.J. Dillon, who admitted to only having talked to Niccoli countless times when he was calling to talk to her husband, Akio Sato, she tried to put into words what she felt for the business. “Wrestling was my life. I loved it. It gave me my whole reason to live. If it hadn’t have been for wrestling, I wouldn’t have met my husband; if I hadn’t have met my husband, I wouldn’t have my two beautiful daughters. It was everything to me.”

“He was always somebody I respect and admired,” said Atlas, explaining that he never got to spend much time with Brazil. “Promoters thought they only needed one black wrestler to draw a black crowd.”

For the late Giant Shohei Baba, The Destroyer Dick Beyer was called upon. Beyer praised Baba for helping make him a star in Japan with three bouts in Los Angeles in late 1962 and early 1963. When Beyer then went to Japan to battle Rikidozan, the fans already knew that the 5-foot-10 Destroyer could handle the 6-foot-10 Baba.

The Senator Hugh T. Farley Award for “significant societal contributions outside of the squared circle” went to long-time Alabama senator Tom Drake. Len Rossi introduced Drake, calling him “one of the finest men I’ve ever met in my life.” Drake, accustomed to public speaking through his 32 years in public office, took the easy road out, thanking the crowd for the honour, and crediting his wife, Chris, for her instructions: “Begin, be brief, be seated.”

In the Pioneer Division, Ray Steele was mentioned briefly by Doink, and then the award for Tom Jenkins was accepted by his great-grandson, Tom Ellis. “It is amazing the things he did in his life,” said Ellis of his grandfather.

In the Non-Participant Division, long-time New York promoter Toots Mondt was inducted, though his many years as a wrestler could have qualified him for the Pioneer Division as well. His honour was accepted by his great niece Tracey Ramirez. Toots “told the most amazing stories of his wrestling adventures,” said Ramirez. “I wish he could be here to share this experience.”

“Next year, you should see an even larger Hall of Fame,” promised president Tony Vellano, telling how the building next to the Hall of Fame will be slowly incorporated into the Hall.

To finish off the banquet, the daughter of the recently-deceased Fabulous Moolah, Mary Austin (who worked as woman wrestler Pat Sherry for a short period), presented Vellano with the first women’s title that Moolah ever held.