The rough road of delivering wrestling to Labrador

My inaugural tour in eastern Canada began normally enough, but things got a little hairy as we went north into Labrador with the Mainstream Wrestling crew.

I landed in Halifax on April 24th, and was pleased to see a big crowd at the show in Dartmouth that night. It seems that, while crowd numbers may be wavering through some parts of Canada, shows were still drawing several hundred throughout the south shore of Nova Scotia. I had been excited by the late addition of Jazz to the tour roster, and our early matches proved to be everything I had hoped for — great matches, and great opportunities to learn.

The second leg of our trip, which took us to Cape Breton and the northern shore of Nova Scotia, then on to two cities in New Brunswick, were very much the same as our first leg; excellent crowds and excellent matches. Unfortunately, as we readied ourselves for our long journey up to Labrador, our crew suffered a major blow when my fellow Ontarian, Quinson Valentino, had to leave as a result of a shoulder injury, only days after Doink had to leave the tour due to injury also.

There had been a lot of talk throughout the tour about the potentially grueling drive from New Brunswick to Labrador. Estimations of everywhere from nine- to twenty-four-hour drives were being thrown around, and many of us on the crew started to look at each other a little skittishly, wondering what exactly we had gotten ourselves in to.

We wrapped up our last show in New Brunswick on May 7th, and were ready to leave for Labrador the next morning when we got some unusual news; the unpaved road to Labrador was especially soft on this particular day, creating a potential driving hazard, especially for the heavy ring truck. After some debate amongst the promoter and business manager, it was decided our first Labrador show would be postponed and made our last Labrador date, allowing us an extra day of travel time.

With that decided, we all began our trek up to Matane, Quebec, where the ferry would take us across the St. Lawrence River to Baie-Comeau. The trip from Campbellton to Matane was an adventure in itself, as I drove the poor business manager’s Lexus down rural Quebec logging roads while he appeared to be having a stroke in the back seat. 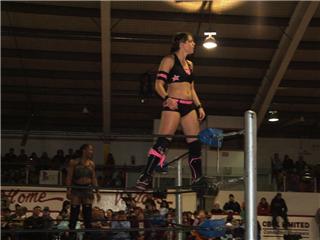 We caught our ferry to Baie-Comeau early the next morning, and began the long drive up to Labrador City. I was surprised to see that the only road leading to Labrador City was unpaved and more or less uncared for. Signs that warned that there were no gas stations for several hundred kilometres appeared around the beginning of the trip, as well as signs that proudly announced the next major city: Labrador City — 589 km.

When we finally arrived in Labrador City some fourteen hours later, we settled in to our hotel rooms for only four hours, having to get up at 5 a.m. for our show in Happy Valley-Goose Bay. If I had thought the road the day before had been bad, I was obviously mistaken, as the sole road that leads from Labrador City to Happy Valley-Goose Bay sported beach-type sand at one point, paired with multiple 12-inch divots lined across the road, which were conveniently surrounded by cliffs on either side. Luckily, Mike Hughes and I were the only two awake to witness our car almost driving off the side of one of said cliffs. 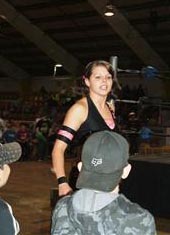 Portia Perez yaps at the audience.

Our show in Happy Valley-Goose Bay was everything the promoter had promised us and more. Wrestling hadn’t been to Labrador in twenty years, and over 1,000 fans filled the arena. Everyone on the tour stepped up and delivered a great show despite missing two key members of the roster. The show the next night in Labrador City proved to be the same, and I was able to leave the tour on a high note, having had my best match of the tour on our last night.

My first tour in Canada surpassed my expectations, allowing me to learn more than I had hoped both in and out the ring. Now, I look forward to my upcoming shows; the Pro Wrestling Hall of Fame/2CW show in Amsterdam, NY on 5/23, the Anarchy Championship Wrestling show in Austin, TX on 5/24, and the Full Impact Pro shows in Crystal River and Arcadia, FL on 5/30 & 5/31. Look for my next column recapping those shows in the coming weeks!