When SLAM! Wrestling reviewed Mid-South: Giants, Midgets, Heroes & Villains Volume 1 DVD, the only negative part of the review was the false advertising of a Ric Flair vs. Ted DiBiase for the NWA World title match. The match never took place and an angle where Dibiase was left with a crimson face was shown.

It was quite pleasing to see that Mid-South: Giants, Midgets, Heroes & Villains Volume 2 DVD started with the conclusion of that angle. In the first volume, Dick Murdoch attacked Dibiase before the match. Murdoch vs. Dibiase seemed eminent for later in the DVD. It never came. The first match on the second volume sees a bandaged and bloody Dibiase make his way to the ring to fight Flair. Maybe a Murdoch vs. Dibiase match will be saved for Volume 3. 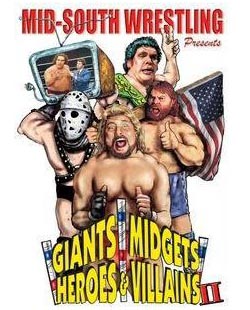 This is another well done DVD by Mid-South. This is classic wrestling. Mid-South was the highest rated cable show for a short period (in the mid-1980s), and this DVD shows why. The angles, matches and personalities are what built this organization. Sadly, trying to build a promotion out of Oklahoma was never going to work and the company could not pay the same as Mid-Atlantic and WWE was at the time; the downturn in the oil economy didn’t help. When stars left, the promotion struggled until ultimately being sold in 1987 to Jim Crockett Promotions.

A few surprises to look for in this volume include an appearance by Vince McMahon, referee Nick Patrick as a rookie wrestler and the infamous Ric Flair vs. Kerry Von Erich cage match from Christmas 1982.

Also, a young and green Shawn Michaels is involved in a tag match with Jake Roberts and Steve Williams. Although he was just a rookie, you can see even back then that Michaels showed signs that he was talented in the ring and looked like a ring veteran in the ring.

The DVD is filled with the matches people want to see. The only exceptions are the matches used to fill the “Giants” and “Midgets” title in the DVD. It is always easy to forward past the two straight Mike Jackson matches. Also, this is a Mid-South DVD, and filling 15 minutes with a World Class Championship Wrestling match (Flair vs. Von Erich) was not necessary. It was interesting to see, and if they wanted to put it on the DVD, it should be put on as an extra. The match is shown with commentary by Mid-South, but the match is only connected to Mid-South because of the NWA World title which Flair held at the time.

Nothing has been announced in terms of future releases. One thing that makes Mid-South special today is that they are really the last big U.S. promotion that have not sold or borrowed footage to the WWE. It is sad to see that there is either not enough demand for it or Mid-South just has not keeping up with production.

Full rundown of the DVD: