Around the world in stories with Earl Black

His name may not be the most famous of all the professional wrestlers to pass through Canada, but if you are looking for someone who has seen it all, simply have a word with Earl Black. 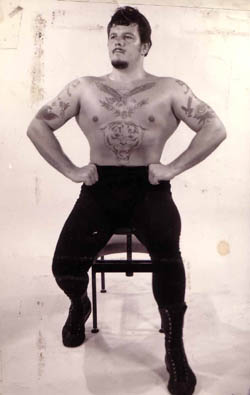 Despite an in-ring career which lasted only seven years, Black, under various guises, wrestled in Australia, Japan, England, the United States, and Canada, to name but a few countries, During that time, he stepped into the squared circle with bonafide legends like Antonio Inoki, Giant Baba, Harley Race, and Gene Kiniski.

Here, in SLAM! Wrestling’s inaugural “Round the world…” article, Black recounts some of the situations he, and others, found themselves in while traveling across the wrestling planet.

Hal Morgan, the promoter I worked for in Sydney in the mid-’60s, was very tough and rather sadistic. He was an excellent submission wrestler, specializing in tearing peoples’ heads off. Wrestler Lennie Holt found this to his cost, lying still with sandbags on either side of his head, in hospital, after once falling foul of Hal.

In the 1960s, wrestlers working for Hal thought that he should pay them more, and decided to go on strike. A meeting was arranged at Hal’s gym, located under a railway arch in Glebe, a Sydney suburb. I was not at the meeting — I was in New Zealand at the time — but I heard that the furious Hal offered to fight all of them.

It was said upon hearing that, everyone backed down, and walked away. So I asked my tag team partner Jan Janssen if that was true.

In Singapore, promoter Steve Rickard had managed to get away from the old system of having rounds, like boxing, and brought in time-limit wrestling matches. On one show, a one-hour six-man tag team was advertised. The capacity crowd enjoyed the match, until the fall was taken after 40 minutes, and the match ended. They considered that they had been ripped off, and that a one-hour time limit match, should actually last an hour.

I remember that someone shouted something in Chinese, and the riot was on. It was raining bricks and bottles, and a rambutan tree landed in the ring. A wrestler by the name of King Kong, as well as Rickard and myself, were trapped. We tried to take refuge under the ring, but it was set on fire, and we were fighting for our lives.

The stadium lights were put out, by whom I don’t know, but he was probably on our side, as it allowed us to find a broom cupboard and barricade ourselves in. We were there for a night and a day before riot police could get us out, but it was business as usual the following Saturday.

I first met Bob Roop in Tampa, Florida. I had never heard of him. To me, he looked like a big, chubby, 13-year-old, though he was actually 25 at the time. He just did not look like a Special Forces paratrooper, which of course he had been. Two other wrestlers also thought he did not look so tough. They challenged him to a fight in the gym, and these were big, strong guys.

Never one to back down, Bob climbed into the ring, and punched one between the eyes, which was the end of the line for him. The other one tried to grab Bob, but he turned him upside down and drove him head first into the mat.

I only found out later that he had been all American amateur wrestling champion four times, a Greco Roman champion, and went to the Olympics in Mexico. You just can’t judge a book by its cover.

Some wrestlers, like me, never go near the office unless they are asked to, or need to. Others, however, haunt the place, answering the phones, peeking at the mail, listening to conversations, trying and get an edge on the other boys. Some, like Joe Tomasso, would report any wrongdoings or slackness on the part of others. They thought that this would keep them in favour, and they would get main events and make more money. If they could not find any gossip, they would make it up.

In 1971, I was in my early twenties, was not bad looking, and was single. So all the women who fancied wrestlers made a bee-line for my apartment, which was on 17th Avenue. We had huge parties, by party isn’t really the word for it — this was a lifestyle! Every time Tomasso came to pick me up to take me to a match, a dozen half-naked women waved from my balcony. Angus (Black Angus Campbell) shared the apartment with me, but did not take part in any of the festivities.

Joe went to Hart House every day with a tale for Stu [Hart], who castigated the wrestlers. He listened to conversations in the dressing room, and repeated them, often embellishing them for Stu. 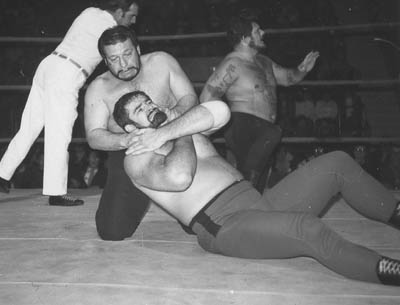 The last straw came when he blamed the innocent Kurt Von Hess for something, and it got back to Kurt’s wife, and caused a lot of trouble. Angus took Kurt aside, and hatched a plan. The only other person involved in the plan was wrestler Bob Pirie. No one else, including me, had any idea about it.

The next part of the plan took place in the dressing room in Regina. Bob Pirie, a natural big mouth, started shouting some very rude things about Angus. I, not knowing that it was a fix, thought Pirie had gone mad, in sounding off like that on Angus. Angus told him to shut up, but Pirie carried on. It came to blows, with Pirie kicking Angus in the crotch. Then, with Angus smoking, he punched Pirie, sending sparks flying everywhere. Pirie flew as well, landing on top of Joe.

Sure enough, Stu had a report about it and sent for Angus and Pirie. Angus showed what mates they were by giving Pirie a hug and a kiss, and Pirie laughed, saying “Are you kidding? Me, take on Angus?!”

Stu began to doubt the veracity of Joe’s tales after that. The final part of the plan was the Friday night party. Hess arranged to go straight home after the matches, instead of coming to my place for a beer. Angus went to someone’s place for a meal. In the dressing room, the excited talk was of the imminent debauchery.

The next day, Stu was on the phone to Hess, laying down the law about under-age goings-on, infidelity, and general misbehavior, which by now included smoking grass. Hess went straight to Stu’s house with his wife and Angus. Hess’ wife was furious, knowing that her husband was home by 10:30, and Angus had alibis that he was miles away at the time of the party. Joe raved at me, but I did not know what he was talking about. He still did not realize that it was Angus and Hess who had cooked his goose.

I don’t know what Stu then said to Joe, but it worked.