Jesse Baget has always been a fan of cult movies and when the opportunity arose for him to make one himself, he turned to the unique world of Mexican wrestling to cut his teeth. 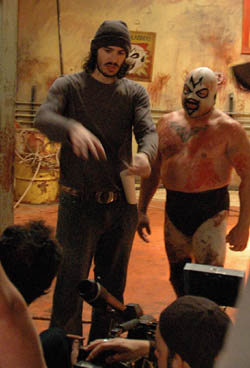 Jesse Baget gives direction to Rey Mysterio, Sr. on the set of Wrestlemaniac.

“I wanted to make a cult film like those from the ’60s and ’70s and I think the concept we came up with was unique and it worked well,” Baget said. “I tried to make it a Tarantino style.”

Admittedly not a wrestling fan, Baget said using Rey Mysterio, Sr., as the main character came from him hearing about Rey’s wrestling character. He ventured down to Compton, Calif., and saw Rey wrestle to get a feel for what he was all about.

“Mil Mascaras was who we wanted at first because he had been in movies before,” said Baget. “But that didn’t work out for us, so we sought out Rey. We had a good talk with his manager and went from there. The arena in Compton (Arena de Compton) was a hardcore scene and I just became immersed in it.”

Mysterio, dressed in full wrestling gear for his part in the movie, plays the ultimate slasher killer who seems to kill for no reason other than to just kill. That’s the effect Baget wanted.

“Having him in his tights and mask was done tongue-in-cheek,” laughed Baget, based in Los Angeles. “And he’s not your typical wrestler with the buff six-pack. He kind of lumbers around. Horror films lately have been a lot like this where the killer isn’t exactly ‘dressed’ to kill. Look at Michael Myers [of Halloween]. In our movie, he just kills and no one knows why. In some movies where we alreddy know why the killer is killing, that takes away from the concept of the movie I think.”

The making of the movie back in September 2006 almost didn’t happen, however, as Baget explains.

“We were originally going to shoot in an insane asylum, but a ghost town made more sense,” Baget said. “Then we were one day from starting shooting and someone on the crew discovered asbestos on our set, so we were screwed. We had to change everything. Two days later we found the ghost town setting in Valencia and worked for 13 days with no script. It was insanely quick. Most of the film was all improvisation. Like, we saw a bus in the town and said, ‘OK, we’ll have a bus scene.’ Some of the movie suffered, but some of it still made sense. It’s still a creepy movie in general, but it is what it is.”

There was also no shortage of fake blood in the movie.

“I don’t know how many gallons we used, but it was quite a bit,” Baget said. “After two days of shooting, it was sticking to our shoes and the floor was coming up.” 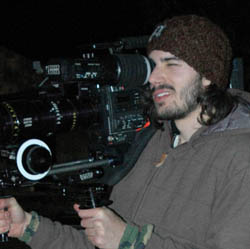 Ending the movie the way it ends with El Mascardo leaving town was a twist Baget said isn’t your typical horror film ending.

“The last scene is El Mascarado just driving away in a van,” he said. “How could we not do that? It was different.”

The movie was released on DVD in the United States March 11 and came out in the United Kingdom, Germany and Japan last summer and last fall. Based on how sales go, Baget said a sequel may be in the works.

“We’ll see how it does,” noted Baget. “Maybe we have more wrestling in the next one or more effects or midgets. I don’t know. I’d like to go back to this concept, though.”